How to find the magnetic field around a wire with the full time dependent Maxwell Equations? [closed]

In all textbooks the magnetic field around a wire carrying a current is found from Ampere's Law. However, I would like to know what the expression for the magnetic field is, using the full time-dependent Maxwell's equations (and how to get there):

For simplicity let's say I'm interested in the magnetic field created by a wire attached to the electrodes of a battery. When you turn the battery on, the magnetic field around the wire is rapidly created. How can I get a time-dependent solution for this? Feel free to suggest how the battery could be treated, how the electrons in the wire respond etc. (I suppose all of these things must be part of the model). Also feel free to treat a simplified problem, eg. we could do the equivalent problem for the magnetic field around an infinite slab of material if that makes the geometry easier. My primary interest is in how the field is propagated into the vacuum around the wire - I would like to see how the solution eventually tends toward Ampere's Law.

EDIT: I will try to make the question easier to understand: We are often taught the magnetic field around a wire arises from Ampere's Law. This applies to a steady state situation only - i.e. it does not occur instantaneously.

It does not tell you how the signal (whether that be voltage or current) originating in the wire actually gets out to the vacuum around the wire, as the current starts at zero and ramps up to some constant value. Presumably this happens via the generation of EM waves, because of course Ampere's Law is not valid on very short timescales.

I do not mind so much what device you use to get the current flowing in the wire in the first place. For example if you want to use a battery connected by a switch to the wire then fine. Or an AC generator slowly ramped up with some assumed time-profile would also be fine. In other words, if you would like to answer this question, you could choose whatever model you think best describes the scenario in which a wire is connected to a battery by a switch and the switch is turned on (or, as I mentioned some other, similar process). The wire can be any shape you choose. I just choose a "wire" because it's the most commonly used simple conductor, but if you would prefer to use for example a slab of conductor, that is fine, because my interest is in how the time-dependent fields converge to Ampere's Law.

For a wire carrying a steady current, all the time derivatives are zero, and $\rho$ is zero. Therefore the electric field is zero. This leaves Ampere's Law, and the solution of that satisfies $\nabla\cdot\vec{B}=0$. That uses all of the equations.

But I wonder, like @JavierBadia, whether you intend a solution that ramps the current up from zero.

It is extremely useful to use the vector and scalar potentials when solving time-dependent problems in electromagnetism. The vector potential $\mathbf{A}$ by definition satisfies $$ \mathbf{B} = \nabla \times \mathbf{A} $$ while the scalar potential $\phi$ is defined such that $$ \mathbf{E} = -\nabla \phi - \frac{\partial \mathbf{A}}{\partial t}. $$ The existence of fields which satisfy these conditions is guaranteed by Maxwell's equations.

The potentials thus defined are, in fact, not unique because we can always add a curl-free vector field to $\mathbf{A}$ and still satisfy the first condition. A final condition must therefore be specified. Introducing this second condition is known as gauge-fixing. In many circumstances the most useful choice of gauge is the Lorenz gauge: $$ \nabla \cdot \mathbf{A} = -\frac{1}{c^2}\frac{\partial \phi}{\partial t}. $$

Using these equations, you can in theory find the electric and magnetic fields for arbitrary currents and charge distributions.

Actually Alesssandro Power's answer is the answer you want since you can express electric and magnetic field in terms of vector and scalar potentials. But if you want full terms explicitly written then you can look at Jefimenko's equations. Somehow you need to have a distribution of charges and their velocities in order to get the fields.

If you don't have charges and currents you need boundary conditions to find them and then you form an equation. This generally results in an integral equation.

The trick is to (a) simplify the geometry and (b) simplify the effect of the "battery". So I chose Cartesian geometry with an infinite slab of electrons in y and z. There is variation in x only. At some value of x the electron density rises from zero up to some arbitrary value representing the density of electrons in the wire, then it drops back down again (to vacuum).

I need an equation of motion for the electrons which I take to be this:

with $\nu$ representing the frictional force associated with ion collisions. After some time this is effectively Ohm's Law.

In this simplified geomtry, the battery can be represented by a fictitious force $F_y$ which splits molecules into positive and negative charges (electrons). This is the EMF force. In 3D this gives rise to a charge and an associated current. Since this force acts in y only, and I am assuming infinite y with no variation, the effect of this force can be represented by the current only (there is no need for the space-charge along y). This force accelerates electrons, which gives rise to an electron current, which in turn gives rise to an electric field $E_y$.

I put this equation together with the Ampere-Maxwell Law with variation along x only. This means we have a $j_y$, $E_y$ and $B_z$.

I assumed the EMF force ramps up slowly in time to some constant value.

I solved all of these equations numerically (just because it's more fun than boring maths). Here are the results of the various quantities, you can see how the EM wave is set up near the edge of the conductor and propagates into the vacuum (I measured the speed and it is c).

Electron density and current (which should make the location of the "wire" obvious): 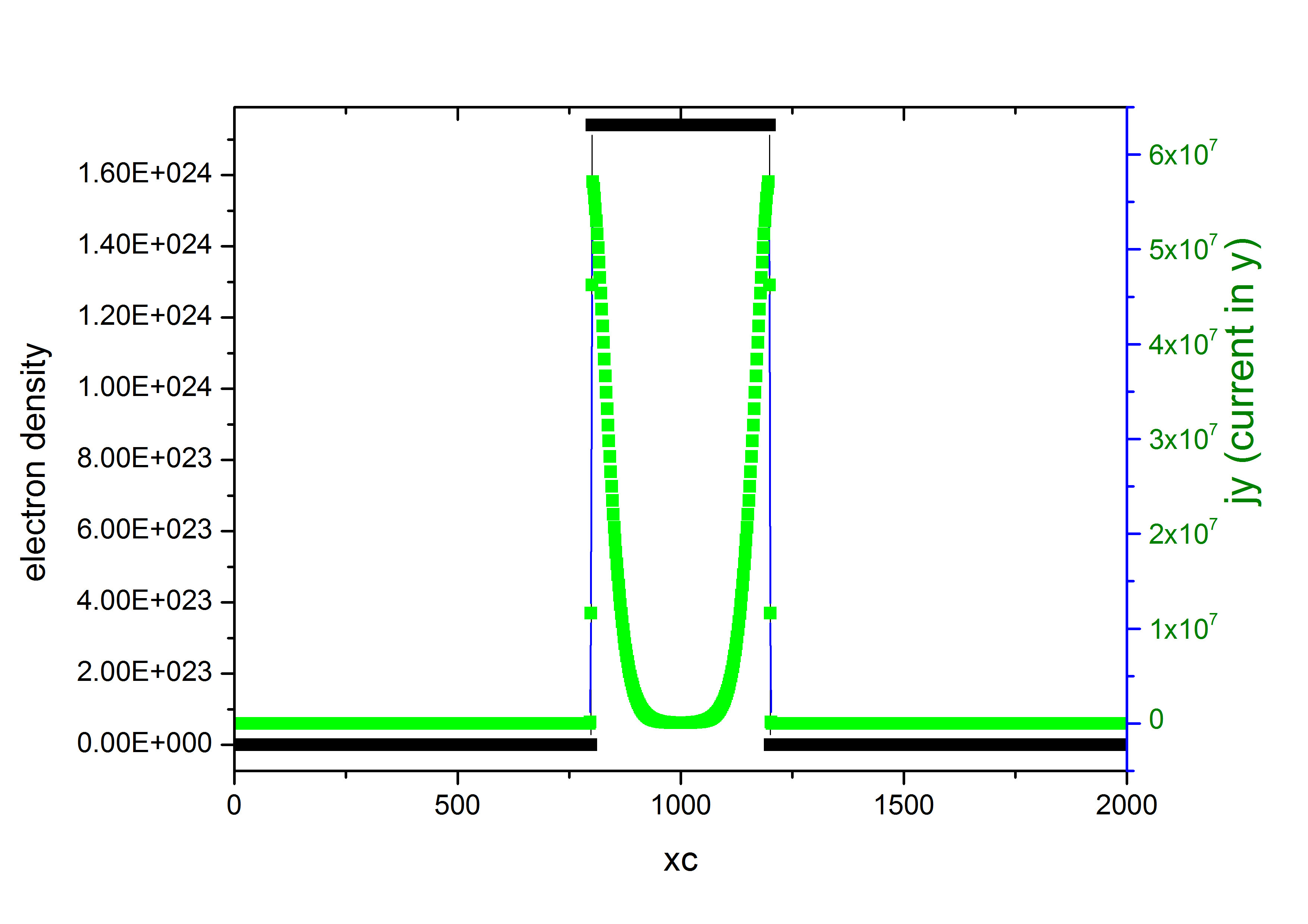 Note that the current flows near the surface due to the skin effect, which arises naturally from the solution of the equations. EMF force and electric field: 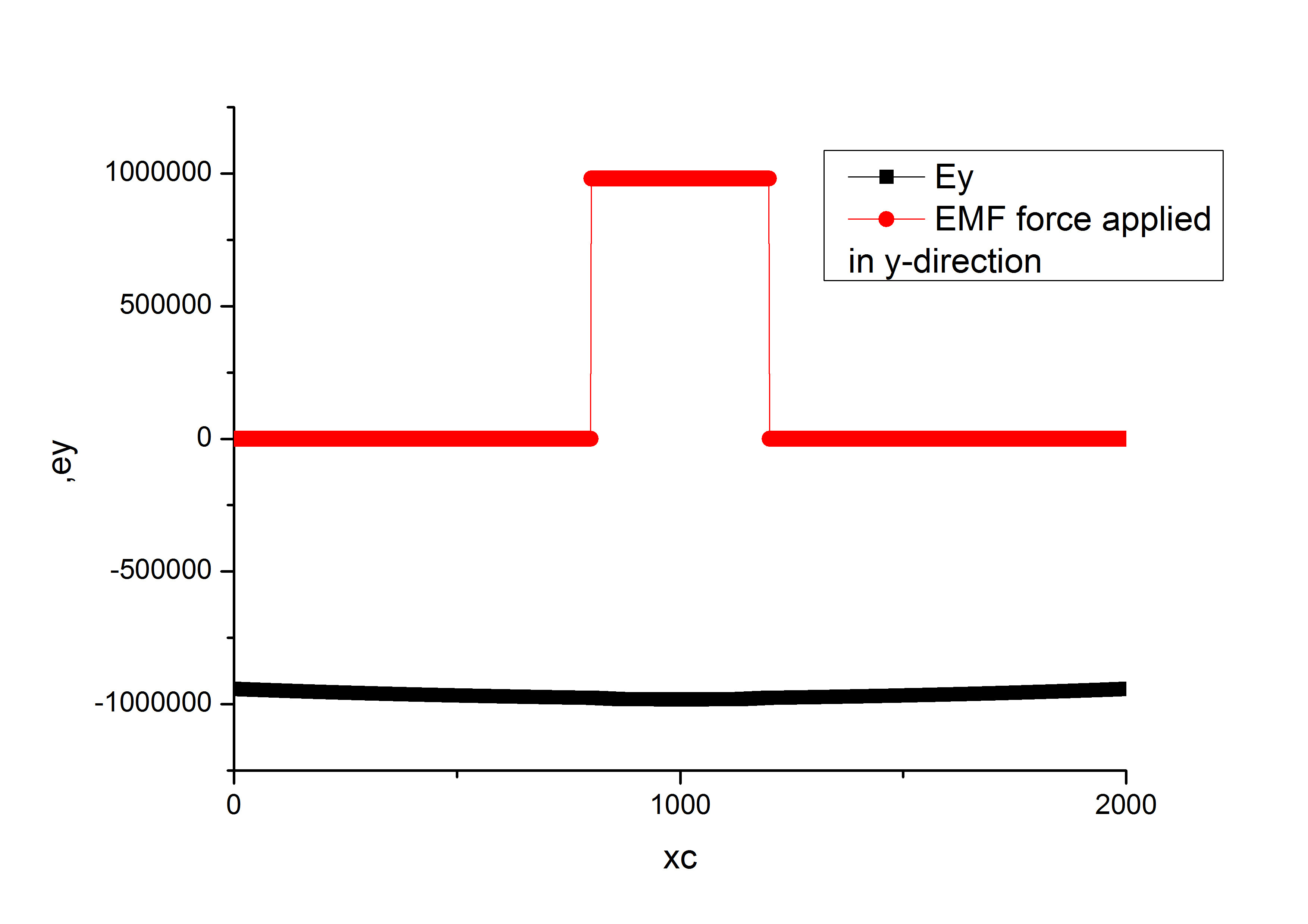 The various contributions to the Ampere Maxwell Law showing the EM waves (this is zoomed in near the RHS edge of the conductor): 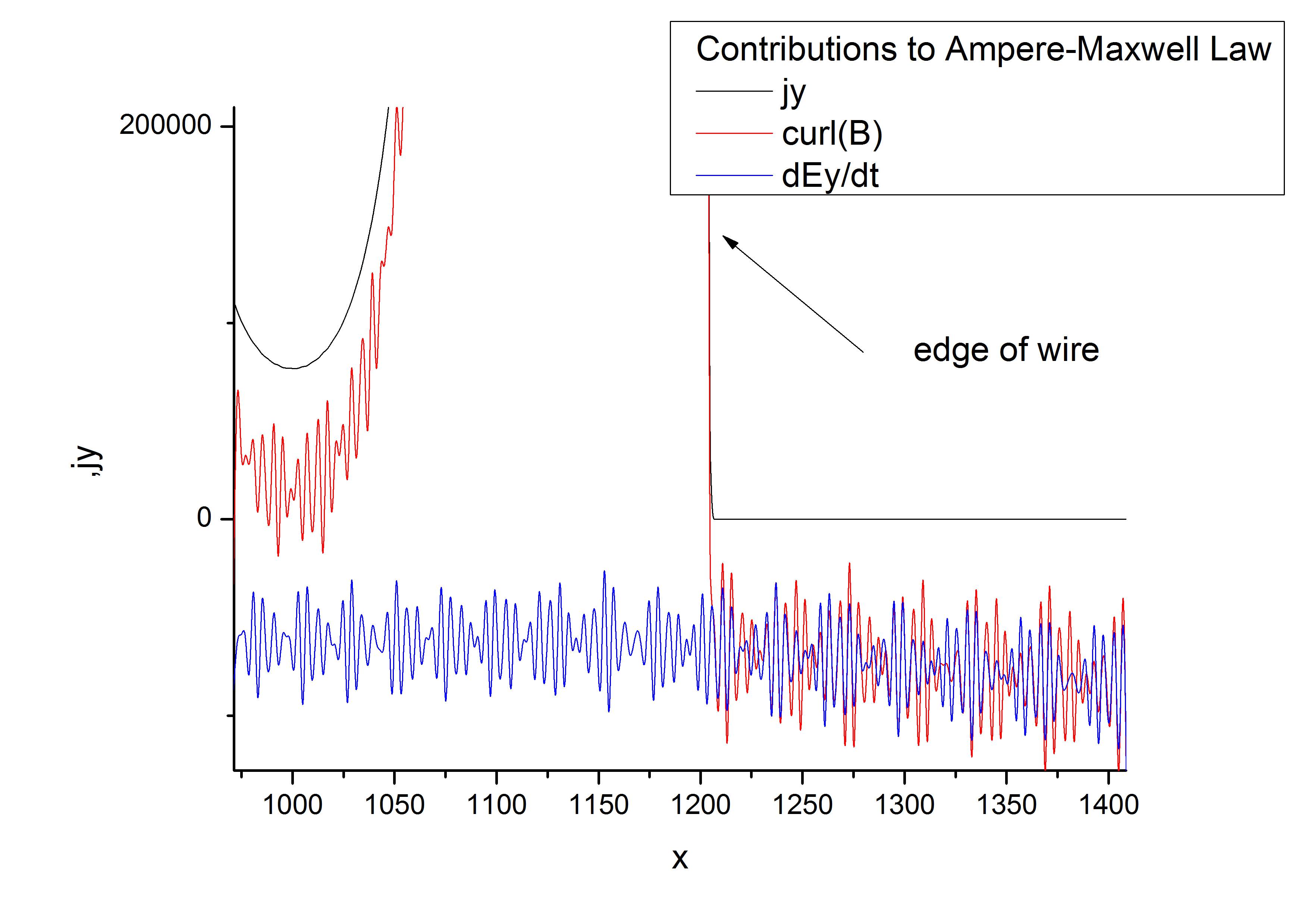 and the final situation showing the 2 contributions to Ampere's Law: 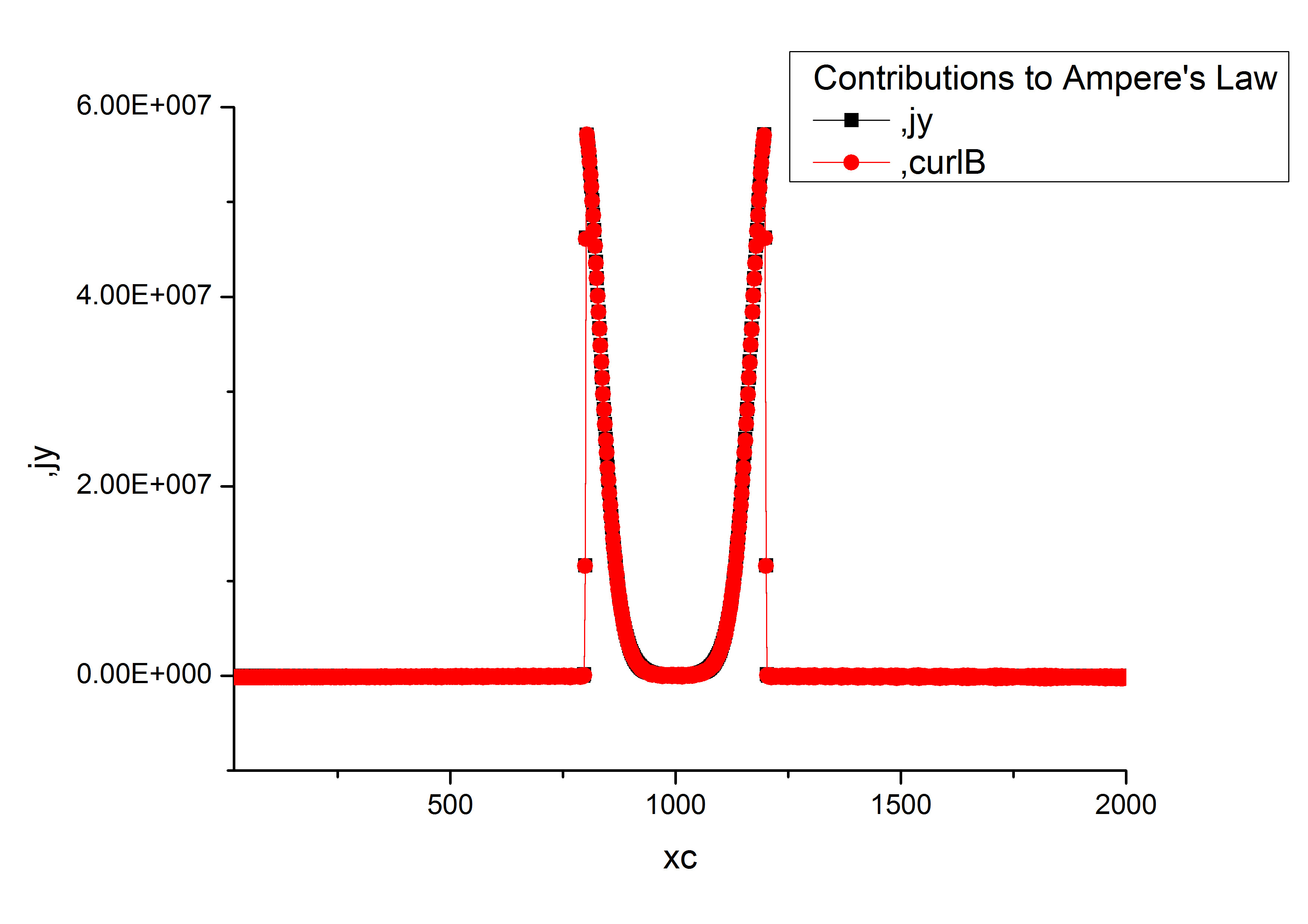 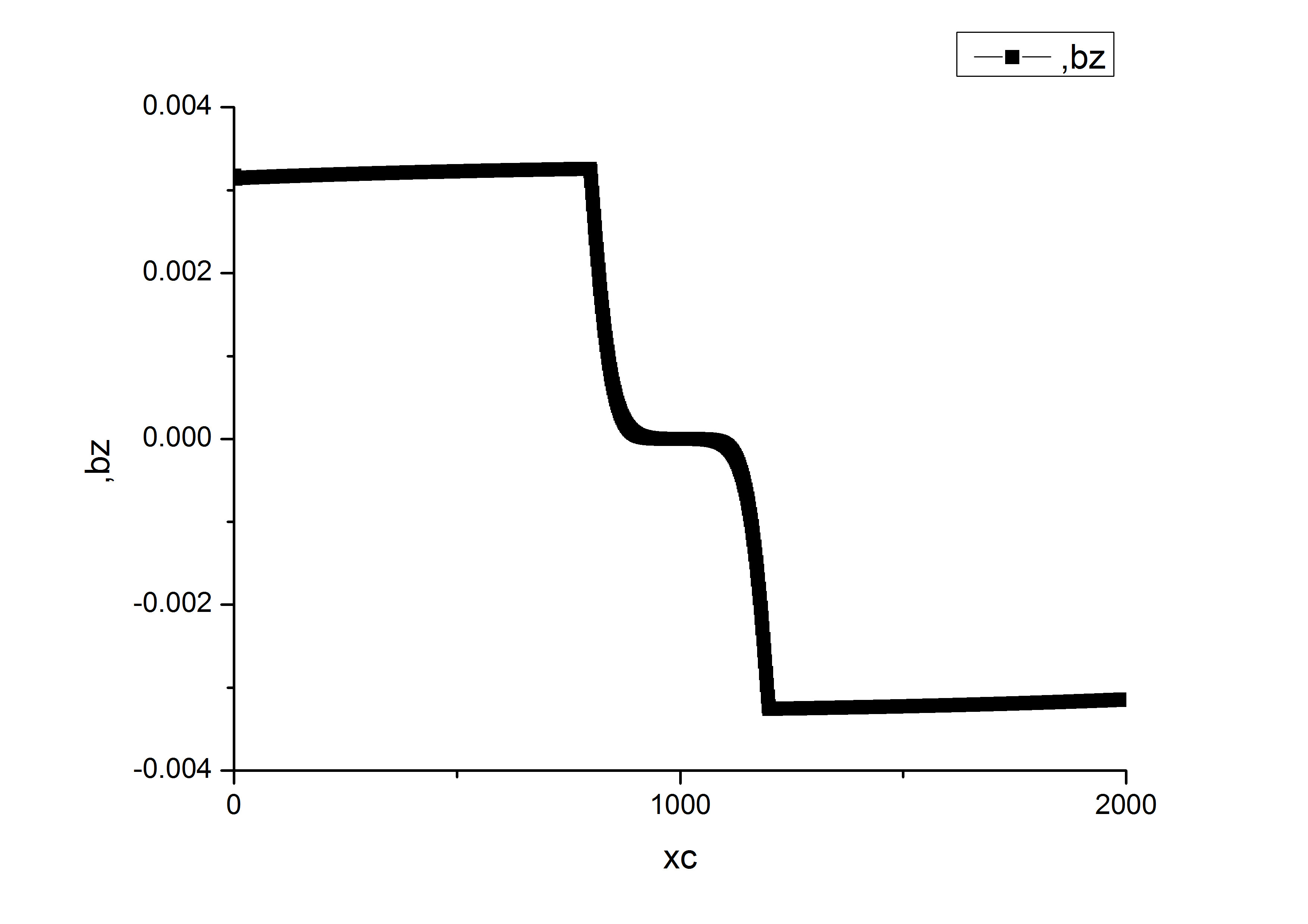