The meaning of Superposition

Is superposition purely conceptual or does it represent some real "thing"? Said another way, is superposition thought to have some tangible physical manifestation or is it simply the lack of physical determinism, except as defined by a wave function?

I guess my question is, can superposition be measured like an electrical charge, or is it simply the lack of knowable position.

It's definitely a real thing!

Think of the double slit experiment, the typical example where pretty much the whole the of quantum mechanics becomes manifest. I am sure you've heard of this experiment before, so I am not going to describe the apparatus.

Basically you have a gun that shoots electrons (even one at a time) at a screen, that has 2 slits.

There are of course three possibilities for the electron trajectory:

1) The electron hits the screen and does not get through the slits: it's either absorbed or reflected - either way, we don't care, it's gone;

2) The electron goes through slit 1, after which it will have a wavefunction $|\psi_1 \rangle$;

3) The electron goes through slit 2, after which its wavefunction will be $|\psi_2 \rangle$.

Let's focus on what's going on beyond the screen, taking into account only the electrons that have passed through the slits.

Now, even outside the context of Quantum mechanics this expression makes sense: if you don't know which slit the electron went through, you'll just assign a 50% probability to each possibility and keep them both.

But Quantum Mechanics kicks in. Both states will have a time evolution, which causes the wavefunction at the slit position (basically a delta-function since you know that the electron must be there) to spread. If the electron is at either one or the other slit, then only one delta-function spreads and becomes a Gaussian-like wavefunction after a while, getting larger (more spread out) and larger.

If the electron is at both slits though, you'll have both delta-functions spreading to Gaussians. The point is that the Gaussians, when they start to superpose, will interfere! The Gaussians here are wavefunctions, which obey the Schrodinger equation (the wave equation- hence this approach to QM is called wave mechanics) and therefore display inteference!

So you end up with the well-known interference pattern. But it's essential that the electron is at both slits, i.e. that its wavefunction $|\Psi\rangle$ is in a supersposition of $|\psi_1 \rangle$ and $|\psi_2 \rangle$. 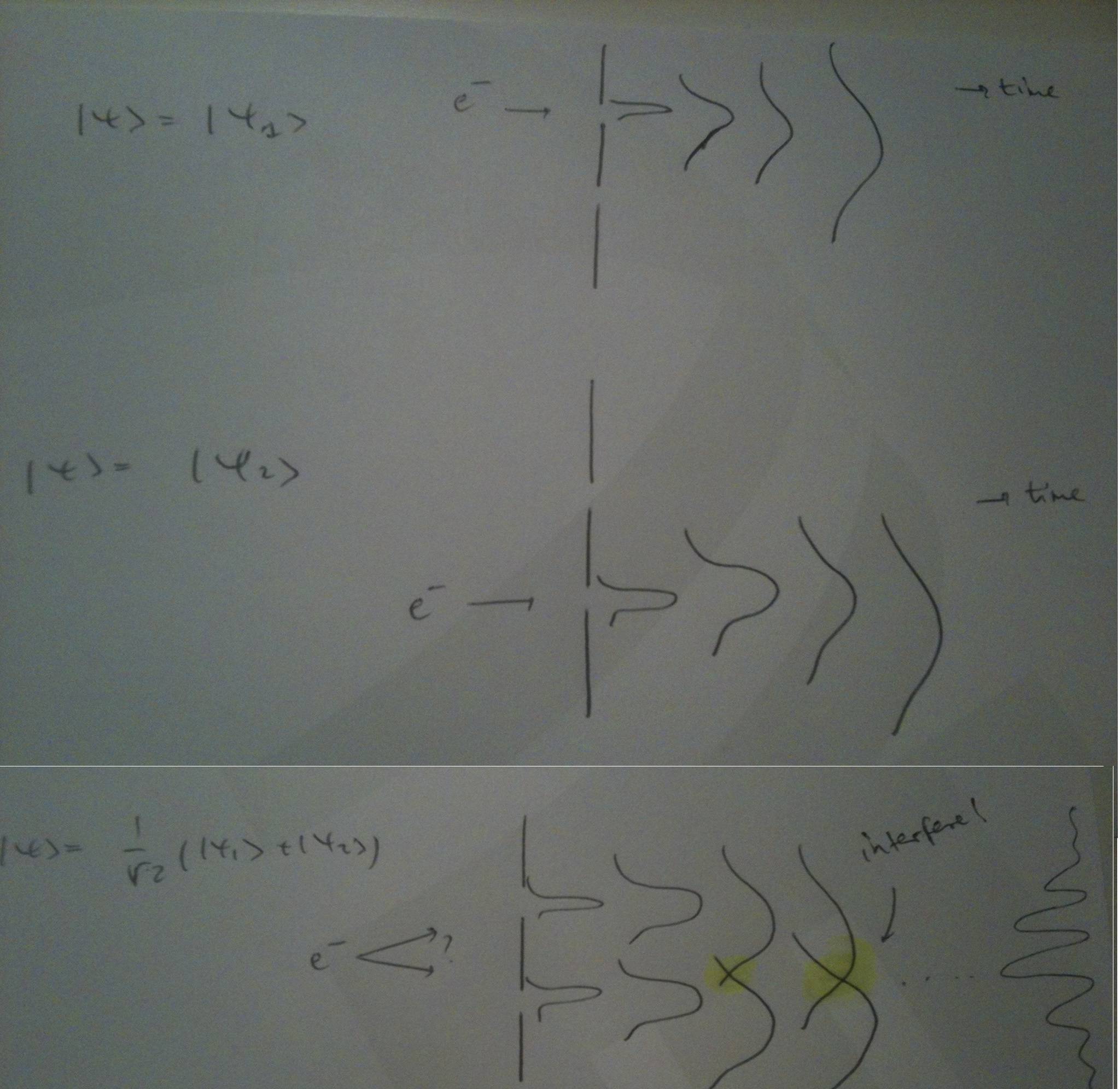 Mathematically, it all boils down to the fact that the inner product of the superposed wavefunction gives you extra (interference) terms: I'll go into the details if you want but I think that you should really get the physical picture first.

To answer your questions:

2) As shown in the example above, superposition gives rise to observable and measurable phenomena, such as the interference pattern of particles.

3) I wouldn't know what you mean by behaviour, but if you mean it as something that is exhibited by the the wavefunction, sure, yes.

Everyday we use superposition in our daily life. From the words that come out of my mouth to the music I have playing in the background as I type this answer, there are plenty of easy an real applications of superpositions to our everyday life. The notion of superposition in quantum mechanics is not inherently weird if we compare it to what we encounter in the daily world.

The best thing you can do to get comfortable with this notion is recognize that superposition is just a fancy way of talking about the combination of many different states in a single system. Most of the time in QM, this mathematically manifests itself as linear combinations.

This notion can be easily understood with a little math and turns out to be crucial for solving QM (as well as many other) problems. Simply put, a Fourier decomposition basically shows us that we can represent any function (with a few requirements in place) as a linear combination of sines and cosines. Here, if we read between the lines something interesting is brought to our attention, the function is in fact a superposition of sines and cosines.

We encounter this type of linear combination everyday and at multiple with speech and sound. Sound can be represented excellently by sinusoids, each with a distinct frequency, amplitudes, and offsets. When you pluck a guitar string, several standing waves at various energy levels vibrate and create sounds. We can define the ratios of amplitudes of each sine (states) to be the Timbre of the note (superposition).

With respect to Quantum mechanics, each energy level in a bound state can have varying degrees of occupancy (a different amplitude for each state of our quantum "note"). The superposition of all these energy levels gives us our final wavefunction.

Superposition happens both in classical and quantum theory.

Consider two electric charges, equal and of the same sign. Each one generates a field around itself. Though, at mid-distance between them, the field is zero. Why? Because of the two fields' superposition. At mid-distance the fields are equal in intensity, but act in opposite direction, and the result is zero.

Superposition is not lack of knowledge, because whether we know, or don't know, does not play a role on states of particles (as far as we don't disturb them). For instance, the wave-function of a neutron polarized in x direction (i.e. its spin projection on the axis x is well defined and equal to $\hbar/2$) may be written as, $ \frac {|\text{spin-up}\rangle + |\text{spin-down}\rangle} {\sqrt(2)}$.

This is a superposition of the states of the spin along the axis z, but we know with precision that the neutron is polarized along x. And we also know, since we learnt quantum mechanics, that in this case the neutron doesn't have a well-determined polarization along z or along y.

3) About "superposition is obeyed" it seems a phrase dependent on context.

4) About observing superposition, one can observe superposition when a beam of particles is reflected by a mirror, and the coherence-length of the beam is sufficiently long, see the picture. 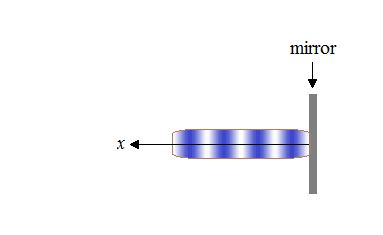 Superposition actually happens in real life but due to the measurement problem, we can't observe it. However, we can observe the effects of superposition. For example, according to Wikipedia:

In fact, quantum superposition results in many directly observable effects, such as interference peaks from an electron wave in a double-slit experiment. The superpositions, however, persist at all scales, absent a mechanism for removing them. This mechanism can be philosophical as in the Copenhagen interpretation, or physical.

Recent research indicates that chlorophyll within plants appears to exploit the feature of quantum superposition to achieve greater efficiency in transporting energy, allowing pigment proteins to be spaced further apart than would otherwise be possible.

The double slit experiment is a great example where the effects of quantum superposition is seen. Basically, a beam of electrons is shot at a screen that has 2 slits. According to superposition, the electrons are in three states:

Based on the wavefunctions, there will be a wave (representing the electron due to the particle-wave duality of quantum mechanics) going through both slits. The wave inteferes causing an inteference pattern below.

This inteference represents the effects of quantum superposition. It is part of a principle known as the superposition principle which is what @Nick was talking about...

I hope you liked this non-mathematical explanation of superposition. If you would like to see math, ask me and I will be willing to do so!

Not the answer you're looking for? Browse other questions tagged quantum-mechanics hilbert-space superposition or ask your own question.

0
According to the Copenhagen Interpretation what does superposition mean?
0
Operators is an infinite dimensional matrix, how can it multiply by a wave function that is a $n\times 1$ matrix? ($n$ is finite)
1
Meaning of Quantum superposition, revisited

28
Spontaneous symmetry breaking in classical mechanics, quantum mechanics and quantum field theory
0
Does Bell's theorem exclude local hidden variables as explanation for radioactive decay?
0
What is the Meaning of the Superposition Principle
1
Is spacetime not static inside a black hole?
4
Why can't the superposition in Schrodinger's cat simply be interpreted as ignorance?
2
What's the meaning of a complex momentum in classical mechanics?
0
What is the uncertainty of a discrete quantum superposition state?