Recently I've started to be really intrigued with the electromagnetic spectrum and bumped into this problem:

Hope I made my point clear. Thanks!

Vertical with respect to whatever arbitrary set of coordinates you devise. If most of the pictures you see have the E-field pointing "up", that's just some kind of cultural bias. The E-field can point in any direction at all. 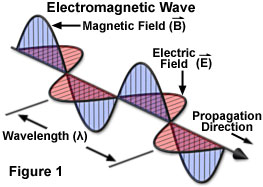 Yes if that was a physical object and you looked at it end-on it would look like a plus-symbol. However it isn't intended to be interpreted physically like that.

What is being shown is field strength and direction at a single point over time.

What you'd see looking into this end-on would be a point (or dot).

The degrees of freedom for the E-field direction then allow other forms of polarisation. The situation I described is linear polarisation, but so long as the E-field vector stays on the page, it can vary with time, it can rotate, it can get bigger or smaller in amplitude etc.

What controls this behaviour is the way that the wave is produced and how it interacts (interferes) with other electromagnetic waves or with interfaces between different materials. For instance if you produce EM waves from a simple linear, oscillating electric dipole, this will produce linearly polarised light where the E-field oscillates up and down along a single line drawn on the page. On the other hand if I then mix this radiation with light with a perpendicular polarisation that oscillates in phase, I will produce light polarised at some angle in between the two (45 degrees if they are of equal amplitude). On the other hand if one of the two waves I mix lags the other in phase by $\pi/2$ I would produce a rotating electric field vector - circularly polarised light. If it leads by $\pi/2$ the electric field vector rotates the other way.

You can also get unpolarised light where the light is an incoherent mixture of different random polariation states. You could turn (some of) this into polarised light by passing it through a polarising filter or by reflecting the polarised light off a block of glass at the Brewster angle. There are lots of interesting ways to mess about with the polarisation of light!

Not the answer you're looking for? Browse other questions tagged visible-light waves field-theory or ask your own question.

3
Non-polarised light
0
Polarization of E-M waves, basic concept question
1
Electric field intensity of light
0
What is the difference between the structure of plane and circularly polarized light?
2
Propagation of EM waves