Light Polarizer and the Second Law of Thermodynamics

I have stumped myself with a thought experiment of my own devising.

Suppose I take a beam of wholly depolarised, but otherwise plane wave light. Its von Neumann entropy per photon is $\log(2)$ nats or one bit per photon - each photon's state takes one bit to describe.

Now I pass the beam through a polariser, knocking out one of the polarisation states. There are now photons in only one polarisation eigenstate left and the entropy per photon is now nought.

and so the second law is "safe" as long as:

So far so good. Work this out for $600{\rm THz}$ visible light (500nm) and we get $T<21000K$. We have doubts about our polariser working as planned if the temperature is thrice that of the Sun's surface, no surpises there, so no Nobel prizes for working that one out!

However, what about a microwave polariser? - a grid of wires in one direction that lets the microwaves pass if their $\vec{E}$s are orthogonal to the wires. Working at $6{\rm GHz}$. Now our temperature bound is $T<0.2K$. Obviously, the polariser will be imperfect and may re-radiate in complicated ways, but if we imagine the whole scenario in deep space where everything around the thought experiment is at $T=2.7K$, then I can't see how polariser cannot re-radiate light with more entropy than what is lost by the polarisation of light. If you radiate heat ${\rm d} Q$ into the CBMR then the entropy gain of the thermalised EM field is ${\rm d} Q/T_{CMBR}$, so we still would seem to hit up against the limit in (1) even after we account for re-radiation.

What (1) seems roughly, intuitively to be saying is that if you polarise light, then you must somehow be able to re-radiate at least as many photons as you absorb, so that there is an overall entropy increase. (The number of photons per unit heat radiated is roughly $\propto\frac{1}{T}$). And this sounds reasonable to me.

And yet, microwave polarisers do work!

What am I missing here?

It seems such a simple thought experiment, I'd be surprised if there weren't a paper on it somewhere, so I'd also appreciate a reference as an answer.

As always the answer is a simple thing. You calculated the change in entropy using the definition of entropy \begin{equation} \mathrm{d}S = \frac{\mathrm{d}Q_\mathrm{rev}}{T} \end{equation} Note that this applies to heat transferred reversibly.

More generally we must use Clausius theorem \begin{equation} \mathrm{d}S \ge \frac{\mathrm{d}Q}{T}\end{equation} Where the $\mathrm{d}Q$ now may be none reversible.

Now a process is thermodynamically reversible if it can be reversed by an infinitesimal change in the conditions, which certainly is not the case here, so all we can conclude about the change in entropy (without doing a more detailed analysis) is that it must be greater than the quantity you calculated, so there never was a problem.

Firstly, the OP is forgetting that the classic microwave polariser experiment is done with EM radiation in a pure state, not a mixture. We simply have polarised light from, say, a Gunn diode and this pure quantum superposition is forced into a polarisation eigenstate by the polariser. So we begin with near to zero entropy light, absorb some of it (adding entropy to the polariser as it heats), and the leftover light is also of near zero entropy. No problem. So this easily explains how the OP claims to remember microwave polarisation experiments shown to him when he was 17 and that they work perfectly at 300K.

But what about depolarised microwaves? In this case, the second law of thermodynamics puts a limit on how well a polariser can work at a given temperature.

Let's imagine a finite-length, depolarised beam of microwaves moving through deep space. All quantum state variables - direction, spin, frequency - aside from polarisation set to known states so the light is fully describable by a $2\times 2$ density matrix written with respect to the polarisation eigenstate basis. The photons don't need to be in frequency (energy) eigenstates and direction (momentum) eigenstates, but instead can be a quantum superposition of such eigenstates (not a mixture), so that they form a pulse can be finite in space and time. The photon ensemble is moving through deep space separated from its source so that we can think of the whole initial system as:

It should be pointed out that depolarised microwaves whose other quantum properties are otherwise perfectly known are exotic creatures and I cannot think of how one might produce such things experimentally, contrasting with the situation for light where such mixtures are much more plausible. Nonetheless, there doesn't seem to be any in principle reason why such mixtures can't exist for microwaves if they do for visible light.

We consider the pulse sundered from its source, so we have already accounted for the entropy increase in the production of the light, which, as Wolphram jonny's Answer points out, will produce a great deal of entropy. There is no problem with the second law here. But we now wish to know what the entropy changes are for the system that begins as incoming microwave energy, polariser and CMBR.

As By Symmetry's Answer discusses, initially the polariser is not at equilibrium and heating is irreversible. It will begin to heat up. But it must eventually reach a steady state: it may have temperature gradients in it with a "hot spot" where the beam is absorbed, but it will eventually be described as a temperature distribution $T(\vec{x})$. This steady state is reached when the sum of the incoming power from the beam together with the heat absorbed by the polariser from the CMBR equals the heat re-radiated to the CMBR radiation field in unit time. I sketch these ideas below. 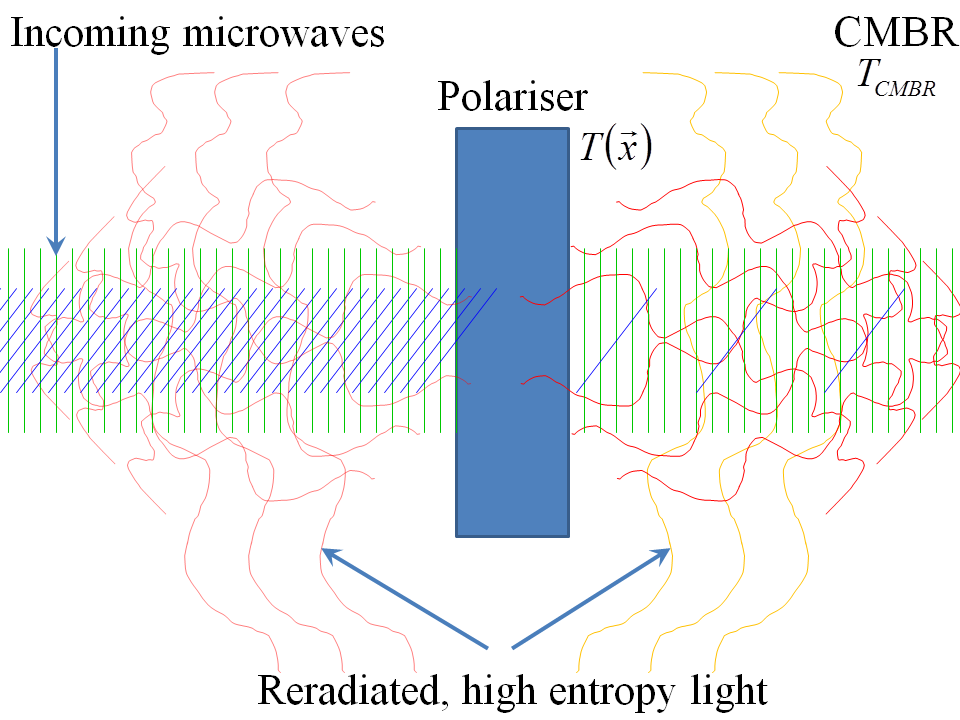 At steady state, the polariser's macrostate is unchanging with time, therefore its total entropy must be steady. We can therefore think conceptually of the conversion happening as the light is absorbed by the polariser and, later, the equal nett power is radiated to the CMBR field as drawn in my sketch below: 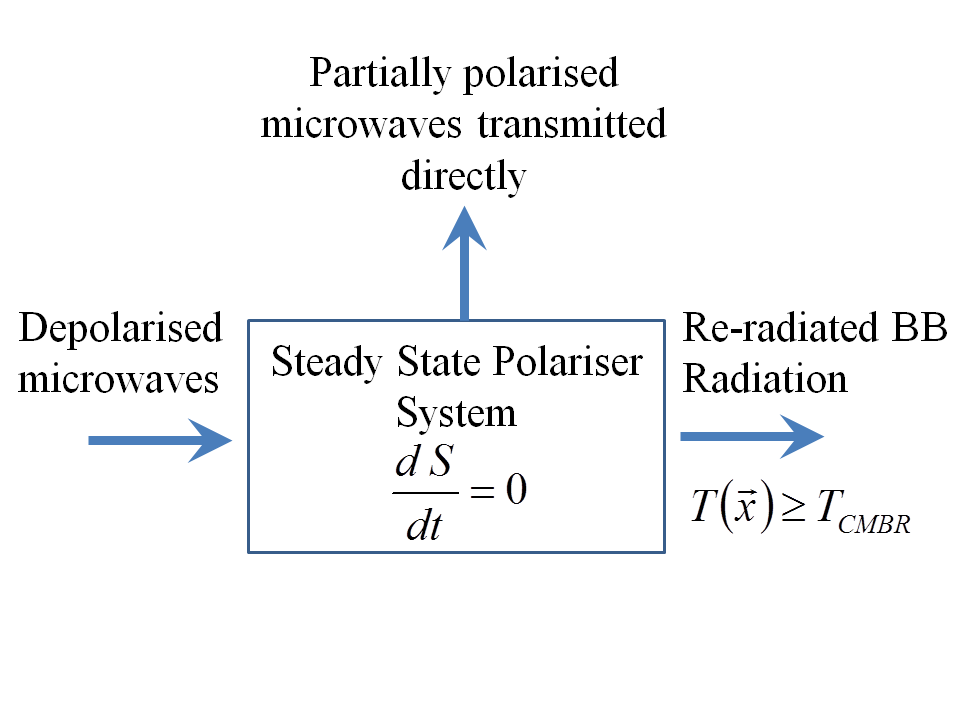 At steady state, therefore, we need to account for:

Now the maximum entropy that the radiation field can "soak up" in absorbing power $\mathrm{d}\,P$ is $\frac{\mathrm{d}P}{T_{CMBR}}$; this is because:

Therefore, the entropy increase of the radiation field must exceed he entropy lost from the beam through any polarisation in all cases, and so:

which reduces to the OPs formula in the case of fully depolarised input light and perfectly polarised output light.

I think the factor you are ignoring is that the polariser will emit thermal radiation. If we continue with the ideal polariser, then it should only emit the polarisation which it absorbs (ideal components are weird). This means that there will still be a component of the absorbed polarisation in the beam after the polariser and so there will always be some entropy in the final beam. This entropy will increase with temperature and decrease with frequency.

I believe the error is in assuming that the polarized beam is a pure state of zero entropy. If you characterize it in terms of polarization only, then the characterization is not complete. You need a complete set of commuting observables to charactherize a pure state. The macroscopic polarized beam is still compatible with many different quantum microstates (for instance, the spin orientations on the polarization plane will still be random). For the same reason the assumption that the entropy per photon will be log(2) is incorrect.

But let us assume a sligthly different but equivalent situation in which the original light source is prepared in such a way that that you know the total state of the system, that is, you are preparing it with all sets of quantum numbers other than polarization perfectly known. The mistake now, I believe is that you only considered the increase in entropy on the polarizer, but not the increase in lost the non-polirizad light itself. During the absorption you will loose a lot of information about the non polarized light (technically will not be lost but mixed with the rest of the polarizer. You didn not include that term. You only included the amount gained by the reservoit due top heay transfer, but that doesnt include all the other information lost because half or your system is no longer in its original state.

Wire grid polarizers almost perfectly reflects the orthogonal polarization that does not pass thru the polarizer. There is a small amount of Joule heating in the wires.

Not the answer you're looking for? Browse other questions tagged thermodynamics optics entropy polarization blackbody or ask your own question.

3
Infinite reflection of light and the conservation of energy / momentum
0
Flip of polarisation of light
6
Entropy of the cosmological constant and the laws of thermodynamics?
4
Deriving Enthalpy from Statistical Mechanics
8
Is it possible to derive Liouville's Theorem purely from maximum differential entropy?
1
What temperature should be taken into consideration when calculating the entropy change?
1
Is entropy lower at zero temperature or the Planck temperature?
1
Can monochromatic light have units of per frequency?