I have this doubt after watching the movie Interstellar;

Lets assume I am on Jupiter. (I know it is a gas planet, full of hydrogen and helium, has extreme pressure, etc. Let's please ignore those facts for this question). As Jupiter has more gravity compared to Earth, time moves slower on Jupiter compared to Earth.

If my understanding is completely wrong, please explain.

I see what you're trying to ask. Let me try to rephrase it: Does an observer at the bottom of a massive gravity well perceive that the clocks of actors outside of the gravity well move faster?

The answer is yes, but the intensity depends on the depth of the gravitational well. For anyplace far away from exotic things like event horizons and perhaps neutron stars, the effects are going to be relatively small.

To illustrate how small, imagine a thought experiment where one observer is very far away from any gravitational well. Compared to them, a person on Earth would count about two hundredths of a second fewer seconds per year.

If you find a way to keep a watch working circling around on the rarefied 'surface' of the Sun (where gravitational acceleration is a respectable ~ 28g), and that watch will count about a minute less per year compared to the distant observer.

Edit: Just had to put some math in. :)
The degree of time dilation at a point on the surface of a massive sphere inside a gravity well has to do with how large the object's radius is compared to the Schwarzschild radius for that mass (in English, that's the radius that you'd have to compress that object into to make it a black hole). The Earth's Schwarzschild radius is about 9 milimeters. Given the formula $$\frac{t_0}{t_f}=\sqrt{1-\frac{r_s}{r_0}}$$, where $t_f$ is the clock of the far observer, $t_0$ is the clock on the surface of the heavy sphere, $r_s$ is the blackhole-radius for that mass, and $r_0$ is, um, approximately the distance from the surface clock to the center of the sphere, you can imagine that that square root is pretty close to one for something like the Earth...

Note the image below: Spaceships in orbit slow down due to moving fast, but speed up due to being higher up in Earth's Gravity well, with the net effect being a speedup at normal orbital speeds. 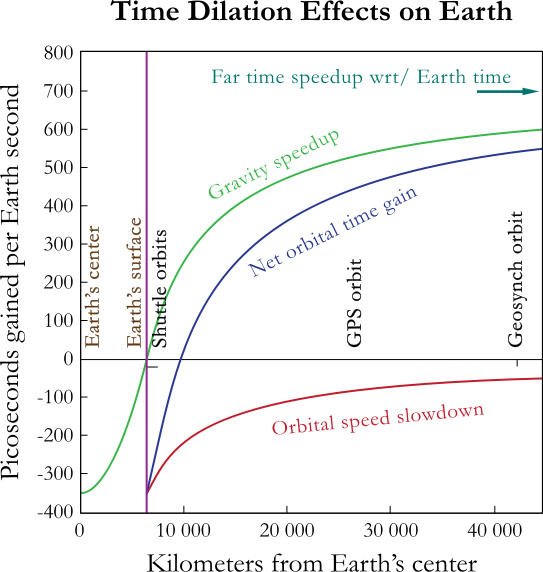 Not the answer you're looking for? Browse other questions tagged general-relativity reference-frames observers time-dilation or ask your own question.

6
Time dilation as an observer in special relativity
7
Does Earth experience any significant, measurable time dilation at perihelion?

15
Movie Interstellar - Question about Escape Velocity
3
Gravitational time dilation, does time of the observer at a lower gravitational potential looked slowed down in the frame of the higher one
4
What are the photon/electron consequences of matter in a gravitational time dilation?
2
Watching a live stream in spaceship traveling away from earth close to speed of light
3
Would things experiencing time-dilation seem to be moving in slow motion to an observer?
4
Planets close to a black hole
0
SR time dilation discussion meaningless when there is gravity?
2
Is there a great difference in the pace of time on a Earth-like planet orbiting a BH at safe distance and on a ship orbiting this planet?