The lie group + representation theory approach to special functions & how they solve the ode's arising in physics is absolutely amazing. I've given an example of it's power below on Bessel's equation.

Kaufman's article describes algebraic methods for dealing with Hermite, Legendre & Associated Legendre. Can we take the other special functions mentioned in this paper, obtainable as linear combinations of the conformal symmetries of the Laplacian (expressed as lie algebra elements), and obtain their solution analogously to how Bessel is solved below? I believe it's something like a geometric interpretation of Weisner's method.

Bessel's equation seems to be saying: find a function in the plane such that when we shift it right, then shift it back left again, all locally (i.e. differentially) in polar coordinates, we get the same function:

The idea is to take Bessel's equation, factor it, add an extra variable to make the factors parameter independent so that they become elements of a lie algebra, identify the meaning of those factors, in this case notice the Lie algebra factors are translations in Polar coordinates, and realize it's just a differential expression of a symmetry.

Using this idea we can, for some reason, actually solve Bessel's equation with a picture!: 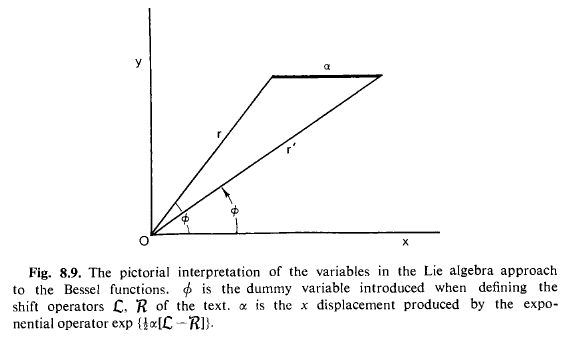 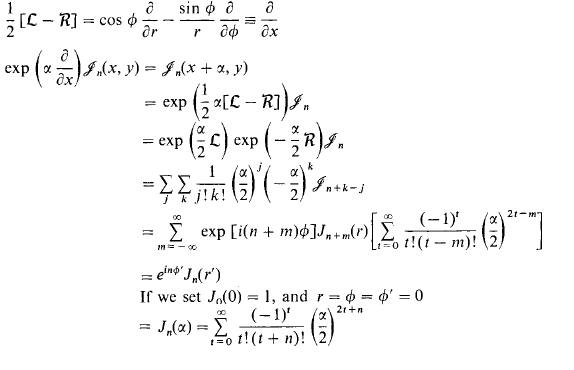 So the last line comes from dragging all this to the origin and putting it along the x-axis, here we see the geometric meaning of Bessel functions!

Hypergeometric is supposed to be related to $SL(2,R)$ symmetries, Bessel to translational planar symmetries, the Gamma function related to linear symmetries $y = ax + b$, etc... Is there an easy unified geometric exposition on how to deal with these babies?

It'd be great to understand the other equations, their formulation and solution, with a geometric interpretation like this one.

You are correct in your interpretation that Weisner's method is geometric in nature: it is a method for finding generating functions for special functions using representation theory of Lie groups and Lie algebras. And as you know, Lie groups play an enormous role in modern geometry, on several different levels. Lie groups are smooth differentiable manifolds, that is, roughly, a type of manifold that is locally similar enough to a linear space to allow one to do calculus. Lie and others showed that the most important equations for special functions and orthogonal polynomials tend to arise from group theoretical symmetries. The initial application that Lie had in mind was to the theory of differential equations: on the model of Galois theory and polynomial equations, the driving conception was of a theory capable of unifying, by the study of symmetry, the whole area of ordinary differential equations. However, the hope that Lie Theory would unify the entire field of ordinary differential equations was not fulfilled.

Thus, it is correct that you can take

the other special functions mentioned in this paper, obtainable as linear combinations of the conformal symmetries of the Laplacian (expressed as lie algebra elements), and obtain their solution analogously to how Bessel is solved below.

because of how these functions are defined. However, there is no general method because this is not valid in general for arbitrary ordinary differential equations.

Not the answer you're looking for? Browse other questions tagged mathematical-physics symmetry lie-algebra differential-equations special-functions or ask your own question.

2
Symmetries & Lie groups in physics
9
Symmetries in physics
5
What is the relationship between Cyclic Coordinates and Killing Vector Fields?
13
Understanding and deriving ellipsoidal coordinates geometrically
4
Conceptual question about field transformation
1
Schrodinger equation, commutative operators, and Symmetry
9
Noether currents in QFT
4
Quantum symmetries which are not described by groups