Does a magnetic field do work on a moving rod? 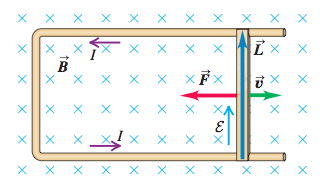 In a case such as this one, my textbook says that I might be tempted to think the magnetic force is doing work (against the moving rod). It then says this isnt the case because "charges move horizontally, and similar to the Hall effect, the left side becomes positively charged and the right side becomes negatively charged; the electric field produced here is what really causes the negative work".

That's nonsense to me. If the magnetic field is not doing any work then the force vector could not be pointing in the direction shown in the figure. But maybe I'm wrong. How is it in this case that the magnetic field does no work?

What I assume the book is trying to say is that, as the electrons move downward (because they are part of a current), the magnetic field bends their path toward the left. This is the horizontal motion that the book mentioned. But of course the electrons can't run off the edge of the bar, so they pile up at the left side, leaving unmatched positive charges (protons) on the right side. These separated charges attract each other, pulling the protons (and the bar as a whole) to the left. So, fundamentally, it's really the electric force that does the work, but if you're taking a high-level view you could say that the magnetic force indirectly does work on the bar.

Maybe this image will make it clear:

The image is done in the reference frame of the bar, not the lab frame (in which the picture in the question is drawn), but the effect is the same.

The resolution to this problem is simple once you know how...

What has happened is that the electron has been merely deflected sideways (but its energy has not changed). This deflection means there is now a slight imbalance in the density of charge because the electrons have all been slightly shifted to one side. That means there is an electric field induced (via Gauss Law)...and it is this electric field, which is also in the direction shown by $F$ in the diagram, that ends up doing the work on the electrons.

A magnetic field can't do any work. Instead of an electromagnet a permanent magnet has the same effect and this magnet will not get weaker in time when charges moves. What happens is that the resistance of the wire gets higher, so the electric source is doing the work.

Electrostatic forces (from slight charge imbalances) help those electrons go around those corners. And for the electrons jumping onto the moving rod from the top, that is what gets them up to speed $v$ rightwards (and back to regular at the bottom right corner). If you imagine an electron that just hopped onto the top of the right wire the protons there are already moving rightwards so there is a positive charge imbalance to the right so the electron is pushed right, over on the left side there is a negative charge imbalance, so the protons are pulled left. They will quickly get a rightwards component of velocity, so for now, let's ignore that and just concentrate on the moving rod.

The total magnetic force is the vector sum of the two (that due to the current, and that due to the rightwards motion v), it is orthogonal to the actual average velocity, which is exactly that needed to get from the upper right corner at $t_1$ all the way to the lower right corner at $t_2$ (which is $L$ units below, and $v(t_2-t_1)$ units to the right of where the upper right corner was back at $t=t_1$. So the velocity is in the direction that the electrons actually move. And the magnetic force is orthogonal to that velocity, so it isn't doing the work.

I'm not sure why your book says that the left side is getting a positive charge (as opposed to the right side), it's the conduction electrons that are moving about. The protons and bound electrons are locked together in a solid lattice so simply get strained by the electromagnetic forces, though there is a net force on the lattice equal and opposite to the net force the lattice exerts on the conduction electrons, and this is what slows down the moving rod, it's pushing those electrons right that are getting pushed left by the current based magnetic force so it will slow down unless something else (like a person) grabs it to push it rightwards.

This is faradays effect: Changing magnetic flux is producing electromotive force which causes the current to flow. The flow of current is in a direction that would compensate for the decrease in flux.

I'm not sure why your textbook says so. By definition, a force is said to do work on a body if the body is displaced in the direction of force. Clearly this is the case, as the magnetic field is a force which is causing displacement of the rod in the direction of the force.

I am a little confused with the following line:

I do not understand what your book is talking about as I can't seem to identify a change in magnetic flux which is necessary to induce an electric current by Faraday's Law of Induction.

So unless your book is able to justify how the electric current is induced, I would say that it is the magnetic field that is doing work on the rod and not any electrostatic force.

Not the answer you're looking for? Browse other questions tagged electromagnetism magnetic-fields work or ask your own question.