Here is the question (from Morin's Introduction to Classical Mechanics book):

One stick leans on another as shown in Fig. 2.21. A right angle is formed where they meet, and the right stick makes an angle $\theta$ with the horizontal. The left stick extends infinitesimally beyond the end of the right stick. The coefficient of friction between the two sticks is $\mu$. The sticks have the same mass density per unit length and are both hinged at the ground. What is the minimum angle $\theta$ for which the sticks don't fall? 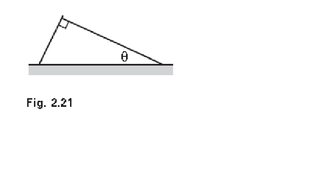 My first approach to solving this problem was considering the intersection of the sticks to be the pivot point. Here, the force of friction would not apply, since it is a force on the pivot point. The only forces that apply would be the forces of gravity acting downward on the two sticks, which balance the torque out. However, the actual answer involves the coefficient of friction: $$(\tan{\theta})^{2} \ge \frac{1}{\mu}.$$

Obviously, my reasoning for this problem will not yield this answer, so I ask, where has my reasoning gone wrong?

You went wrong when you considered the intersection to be a pivot point. The sticks are hinged at the ground. Those are the points around which the sticks will pivot.

1) The stick on the right will fall to the ground unless the force of friction is big enough to prevent it. How big does that force need to be?

1
Frictional force on an inclined plane with applied force = Mgsinx - Mgcos x?
3
Better approximations with two sticks
1
Problem in getting correct coefficients of frictional forces in the Lagrangian equation
0
What is the physical interpretation of this limiting case of a block on a wedge?
2
What happens when an expression for a physical quantity becomes undefined?