Locus of a moving mass point

The initial condition of the system before being freely released is as in the Figure:

The midpoint $O$ of the thread is exactly at the edge of a table. Suppose the acceleration of gravity is $g$, there is no friction between particle, thread and the table, and the partile $m_1$ freely drops in an absolute vacuum environment and no air resistance;

what is the locus of particle $m_1$ before it hits the table?

I obtained a complicate nonlinear system of ordinary differential equations, which is difficult to solve.

Can the locus have a closed-form solution? 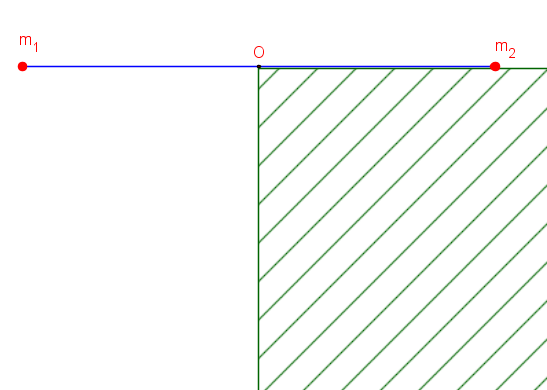 Browse other questions tagged or ask your own question.

10
Elastic collision of point particle and rod
4
Determine path of point mass using the Hamilton's principle
1
Why do particles of equal mass (with one at rest) undergoing elastic collisions scatter at only right angles?
1
Conservation of Momentum for Pulley System
1
Mass diffusion from a point source in spherical coordinates
1
How to interpret the conservation of mass equation?