Why is surface tension parallel to the interface?

If this is the case: Why is surface tension considered or experienced as a force parallel to the interface while it is so obvious that it must be perpendicular to it?

Let's look at what is going on when there is a liquid-gas interface. We know that in the liquid, there will be some high concentration of liquid particles, and in the gas there will be a very small concetration of particles. This mean as you move from the liquid to the gas you will see a continuous density gradient between the liquid and gas. (In practice this density gradient is so sharp that we think of it as a discontinuous change in everyday life, but actually it is continuous.)

Now let's turn to the interface. We saw in the very first paragraph of this answer that the density at the interface is lower. This means that the particles are farther away from each other on average. Since they only repel when they are close, the particles on the surface must be pulling on each other more than pushing, so that there is a tensile stress in the surface. Also since there are more particles on the liquid side than on the gas side, a particle also feels a net force toward the liquid.

Now the net force toward the liquid on the particle at the surface will not cause the interface to move because as the first particle is sucked back into the bulk of the liquid, another one will randomly bounce out of the liquid to take its place.

However, the tension can be used to do work. Since all the particles at the surface are pulling on each other similar to stretched elastic sheet, that is exactly how the interface will behave. So if you have a soap film, for example, which is attached to a movable boundary, then the surface liquid particles adhered to the boundary will give a pull to the boundary and that pull will move the boundary inward, just as a stretched elastic sheet would. Notice here that all the relevant forces are in the plane of the sheet. This should hopefully explain the microscopic picture.

In the thermodynamic picture, I don't consider there being any net force on a bead at the surface. There is an energetic force in the direction of the liquid due to the interactions, but I consider this to be balanced by an entropic "diffusion" force generated by the concentration gradient. This diffusion force causes particles to want to move to high concentration to low concentration. Thus it points toward the gas. Thus in equilibrium, there is no force anywhere so nothing should change. 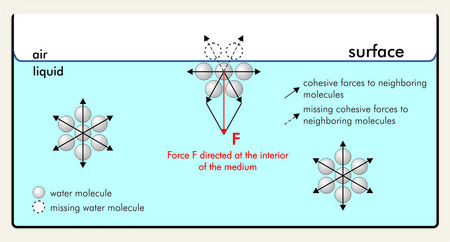 This is indeed very confusing. I think of it like this. Note this approach is purely conceptual and not at all rigorous! For a general definition of Force as the change of potential

As you can see in the image, when a water molecule reaches the surface there has been work done on that molecule via the Hydrogen Bonds, an electrostatic force.

The potential is created by the Electrostatic Force generated between watermolecules, also called 'Hydrogen bonds'. So the potential of a molecule at the surface is

Where F is the work done by the electrostatic force or 'hydrogen bonds' and y is the distance along where the Force has acted (e.g. in a small spherical droplet the midpoint.) dm is the mass of a watermolecule.

Now imagine the linear density, which is defined:

And as you can see the acceleration in the y-direction creates the force in the x-direction. Of note is that y is the depth to which the hydrogen bonds cannot be approximated to be equal on both sides, which is actually quite small. In other words surface tension isn't really strongly correlated with the depth of the body of water like the last equation suggests.

TL;DR: The force parallel to the surface is created by a potential difference per horizontal distance caused by the electrostatic force in the perpendicular direction.

Not the answer you're looking for? Browse other questions tagged surface-tension or ask your own question.