In the 2011 movie Melancholia, a planet, also called Melancholia, enters the solar system and hits the Earth. I want to leave aside the (also unreasonable) aspect that planet "hides behind the Sun" and is undetected until it's a few weeks from Earth. I want to focus on the final stages. In the movie, the planet passes close to the Earth, starts receding, doubles back and hits the Earth, all in a few days. My question: Is that physically possible? I guess not, but I was never good at orbital mechanics.

Assume the givens are as in the movie. One of the main characters finds on the internet a path for the planet that seems to what it eventually does. Mass of the planet is four times that of the earth? 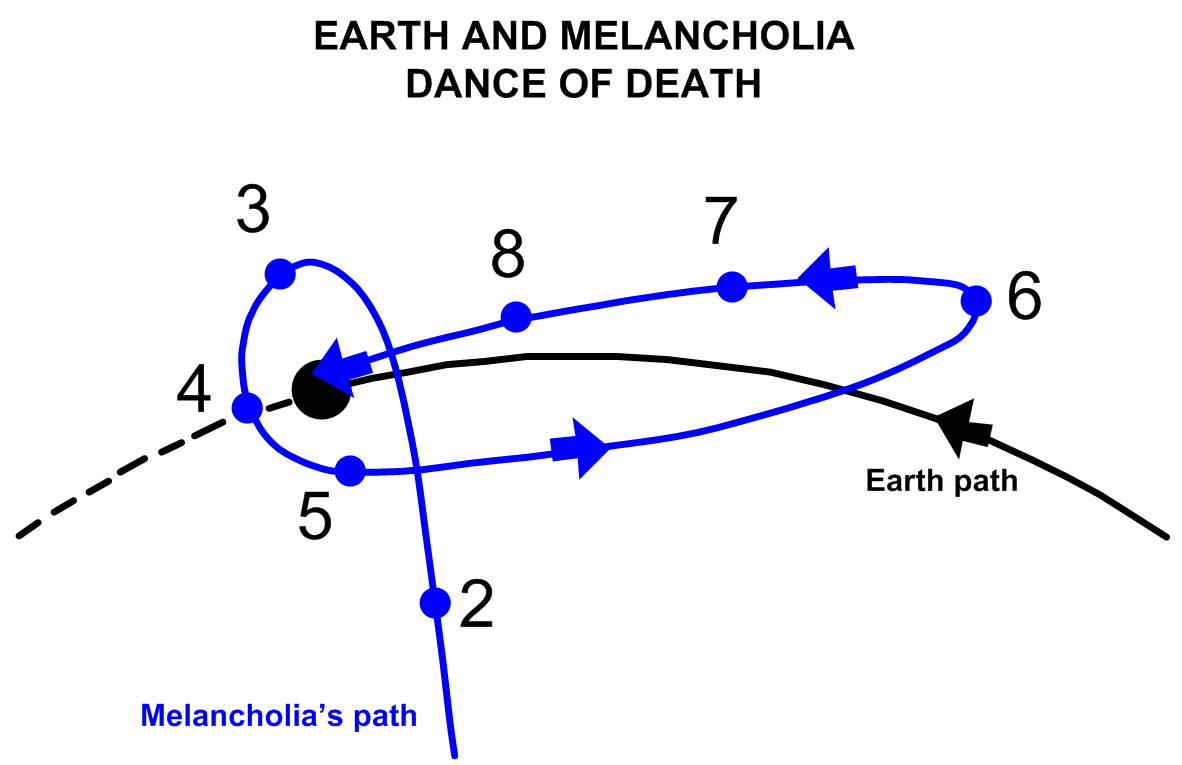 A planet that was four times the mass of the Earth would tend to drag and/or slingshot the Earth out of its orbit; multiple interactions are possible depending on the details of the first pass, but any further interactions would take place around the center of mass of the Earth-Melancholia system, which you would find by adding their initial vectors weighted by their mass (assuming that we can neglect the sun, which we can't, but it gives you a very approximate idea of what would happen).

Melancholia seems to be much larger in mass than 4x. This website allows you to simulate the setup in the movie. It suggests that the earth would come out of its orbit and smash into Melancholia without any full orbits at all.

And has anyone considered the speeds involved. I already just posted this on another forum, but here are my thoughts:

John mentions, prior to Melancholia boomerang move to smash into the earth, that it is travelling away from the Earth at 60,000 mph. Now, in cut scene at the start we see the planet, upon impact, consume the entire diameter of the Earth in around 20 seconds. That's around 8000 miles. In 20 seconds!

Even if we charitably assume the collision with Earth did not slow Melancholia down at all, AND don't consider that the Earth is moving away from Melancholia in its own orbit from the sun, it still meant Melancholia was travelling towards the Earth at around 1.44 million mph at the point of impact. That's around 1/465th LIGHT SPEED (186,000 mps * 60 secs * 60 minutes / 1.44 million mph = 465).

Please someone correct if my maths is way off, but the numbers look approximately correct to me!

What kind of gravitational force is required to make something considerably more massive than the Earth (maybe 20 to 60 times), travelling at 60,000 mph away from it and getting it to travel at 1.44 million mph towards it? My humble guess is that it would take a lot more than the Earth's puny 1G. A very close fly-by would probably hardly bend it's trajectory at all with Melacholia being so massive by comparison. Quite the opposite, the tidal forces exhibited by its mass would probably rip the earth apart!

It seems to me that if Melancholia were four times the mass of the Earth, and passing behind us in our orbit, its gravity would have sling-shotted us backwards into a retrograde orbit while changing the path of Melancholia into a prograde orbit at a similar distance from the Sun as is the Earth. The planet would appear to recede from us leaving the Earth "spared." However, in six month's time Melancholia would barral down on us at a combined speed of 132,000 miles per hour (37 miles a second!).

For a simmilar celestial game of "planet pool" I suggest that you look up the H.G. Welles story, "The Star". It predicts nicely the effects of a small star which wanders through the Solar system.

Judging by the intro cinematic where the earth was absorbing the atmosphere of melancholia, perhaps earth is much denser than melancholia. Not to say whether the fly path is possible, I'd say it's not impossible.

Also the depiction of the collision at the beginning of the film shows earth pulling Melancholia's atmosphere towards it right before the impact. Given the difference in respective mass Melancholea should pull earths atmosphere it.

It's hard to believe that in a production like this that no one involved asked these basic questions so there must be a very good reason why,( something specific to the meaning of the story), the planets and their dance is depicted in a way that so obviously flouts basic laws of physics.