What is the cause of the normal force? [duplicate]

I've been wondering, what causes the normal force to exist?

In class the teacher never actually explains it, he just says "It has to be there because something has to counter gravity." While I understand this is true, it never explains why. Whenever I ask anyone else they always respond in a similar way, saying "It has to be there, because the object is not accelerating", and this has become very frustrating.

So what is the cause of the normal force? From my reasoning, it has to be one of the four fundamental forces. (Gravity, electromagnetism, the weak force, or the strong force). It would seam to me that electromagnetism would make to most sense (electrons in the outer shells of atoms repelling each other),

However, just as I thought this had to be right, I read a thing online about "certain fundamental particles repelling each other when their wave functions overlap". I haven't studied quantum mechanics yet so I'm not really sure what to make of that.

If anyone could shed some light on this for me it would be much appreciated.

Assuming that by "normal force" you mean the one that acts against the force holding the object to the surface: it's electromagnetic. As a simple example, consider two interacting atoms. Basically, the force between these atoms arises from three sources:

If you graph the total potential energy of these contributions as a function of the atoms' separation, you get something that looks roughly like this: 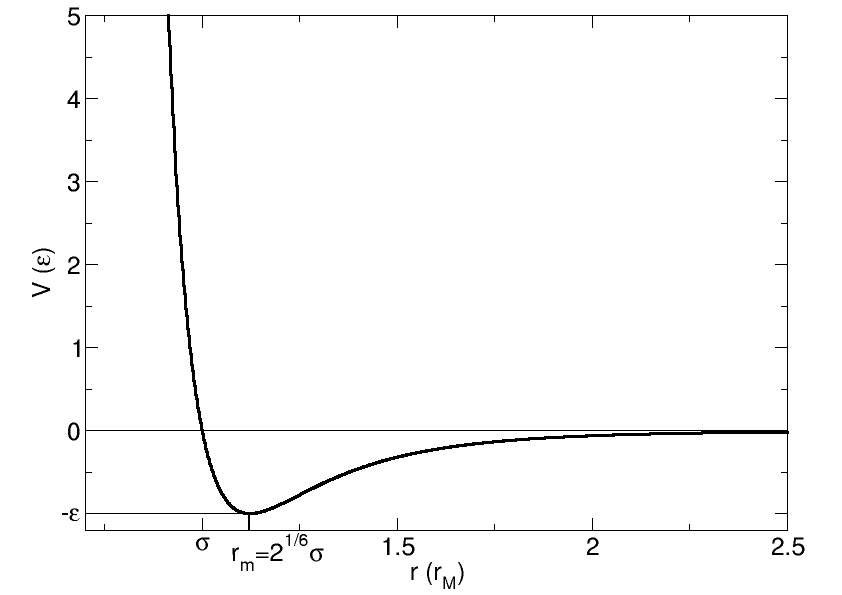 Knowing that force is the negative gradient of the potential energy, you can tell that the atoms experience a repulsive force when they are close together and an attractive force when they are further apart. The repulsive force gets larger the closer together the atoms are, essentially without limit, so no matter what force is pushing the atoms together, the system will reach some equilibrium point where the forces are balanced (except under certain extreme conditions that never occur on Earth). This illustrates how atoms are able to resist the forces pushing them together.

Obviously, the real story is much more complicated because real objects are made of molecules, and there are many different kinds of interactions going on.

The normal force is not really due to any of the four force of nature. The forces of nature are not all the forces in the macroscopic sense, they are just the fundamental bosonic particles in a modern quantum field theory description.

The normal force is due to the Pauli exclusion principle almost exclusively. This is because electrons have the property that two electrons cannot be in the same quantum state. Two electrons can't be at exactly the same point.

But you might be thinking, "two point particles in three dimensions can't ever be at the same point, it's infinitely improbable!" In quantum mechanics, the particles are spread out in a wavefunction, and the condition that they can't be at the same point means that wherever their spread-out-ness overlaps, the wavefunction is zero. The wavefunction is in 6 dimensions for 2 particles, so it is hard to visualize, but the zeros appear on the diagonal part, where the two positions for the particle coincide.

When you bring two objects to touch, the electron wavefunctions are squeezed together, and the average scale of variation increases slightly, because of the exclusion. The rate of change of the wavefunction is the momentum of the electron, and as you push them closer, it costs energy. This is the source of the normal force. It would not exist if electrons were elementary bosons.

I have no idea if you will ever read this, you might because as far as I can tell you are a user, but ALL of the answers given here are completely wrong. The Fn occurs simply as a reaction to gravity pushing down on a surface, as per Newton's Third Law.

To answer your question of what force is behind Fn, the answer is GRAVITY, and most certainly not electromagnetism.

Not the answer you're looking for? Browse other questions tagged electromagnetism newtonian-mechanics forces pauli-exclusion-principle or ask your own question.

111
How can I stand on the ground? EM or/and Pauli?
0
Internal mechanism of normal contact force in a lift or other situations