How is wind created?

I know that 'blowing air is called wind', but what I don't know is, how is wind created?

And I don't want the answer from Google Search. I want to know more about wind at the atomic or molecular level.

A friend of mine once overheard a conversation between a father and his child on a public transit bus on a windy day. Child: "Why does the wind blow?". Father: "Some places are cold and some places are warm. That is not fair. Thus, the wind takes the cold air away and moves it to the warm place so that everybody's happy." - IRO-bot, from Earth Science Stack Exchange

Wind is created in three steps$^1$:

I assume you would like an atomic/molecular description of #3 (say so if not and I can update the answer).

Q: Why does new air rush in to replace rising hot air?

The short answer is: because gas molecules fill their containers.

We need only one equation, the ideal gas law:

Think of the atmosphere as divided into horizontal layers. When hot air rises to a higher layer because of buoyancy, that increases the number of gas molecules $n$ in that layer (and decreases the number in the layer below). Since the volume of the higher layer $V$ has not changed that means the pressure $P$ must have increased. This happens because if you add a more gas molecules to a fixed volume there will be an increased number of collisions of the gas molecules with the walls of the container, which will register as an increased pressure (see the kinetic theory of gases). This increased pressure in the top layer of the atmosphere and decreased pressure in the lower layer results in a downward force on the gas molecules in the lower layer surrounding the rising hot air as shown on the far right and left of the diagram$^2$ below: 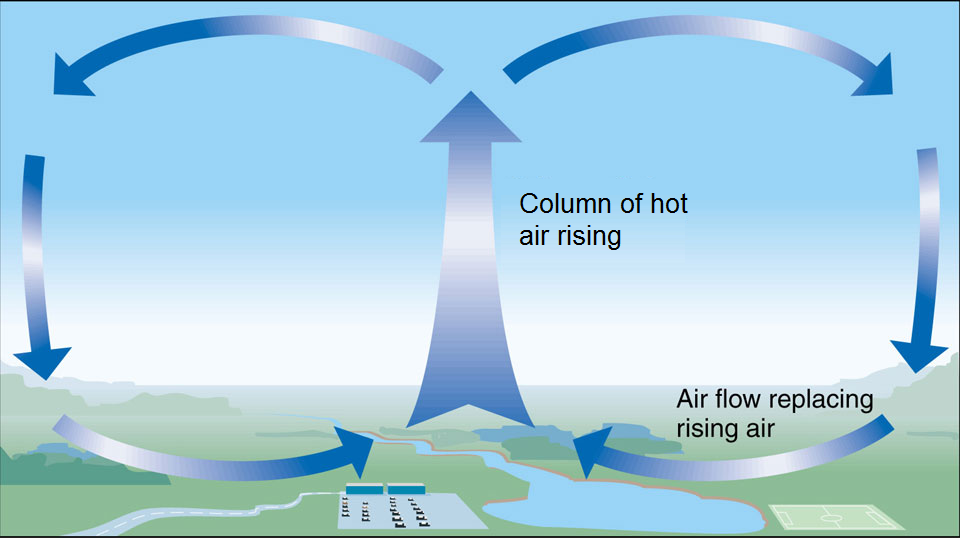 By the ideal gas law, the right side is at higher pressure. Since the right side has more gas molecules colliding with the wall than the left side does, the wall will experience a net force and move to the left until the number of collisions (pressure) is the same on both sides.$^3$

$^1$ Sources: UK National Weather Service and Iowa Energy Center
$^2$ Image source: UCSB, Geography 110 taught by Joel Michaelsen (modified)
$^3$ Note that this assumes the collisions are equally as energetic, i.e. the gas is at the same temperature on both sides.

I know that 'Blowing air is called Wind' but what I don't know is, how is wind formed? And I don't want the answer from Google Search. I want to know more about wind in atomic or molecular level

It is not out of a quirk of physicists that even though we have an enormous knowledge of how the microscopic framework of atoms and molecules works, we still teach and study Thermodynamics. The study of statistical mechanics shows how thermodynamic quantities emerge from the many particle complex system at the molecular level.

At the molecular level interactions are all electromagnetic, repulsions and attractions all at the basic level are due to various electromagnetic interactions with the spill over forces from the positive and negative electric fields of atoms. As an example the van der Waals force

It is also sometimes used loosely as a synonym for the totality of intermolecular forces.

The Pauli exclusion principle also defines the relative compressibility of the volume that molecules and atoms can occupy .

Thus the collective motion of atoms and molecules in air can be described by these forces and interactions, BUT when one has the tools of thermodynamics it is like using a surgeons laser knife to dig a well. One chooses the appropriate physics framework theory, and thermodynamics with fluid mechanics equations are sufficient.

The temperature of an ideal monatomic gas is a measure of the average kinetic energy of its atoms. The size of helium atoms relative to their spacing is shown to scale under 1950 atmospheres of pressure. The atoms have a certain, average speed, slowed down here two trillion fold from room temperature.

Let us take a simple example: Hot air rises in the fireplace and a wind is generated. What happens at a molecular level is :

The average velocity of the molecules becomes higher from being kicked by the fire's heat.

All molecules are subject to the force of gravity. At very low kinetic energies, the air would stay at the surface of the earth.

In the chimney before the heat is turned on the average kinetic energies at all levels is the same. Therefore the pressure which is statistically built up by the collisions is the same, as many molecules transfer an impulse down as get kicked up.

For simplicity then let us consider upward and downward forces only. To rise, an individual molecule will have to overcome the force of gravity. Thus by creating a "hotter" sample, it will have higher average kinetic energy and a statistical motion against gravity is built up, and the hot statistical sample becomes more widely distributed in volume. This allows phase space for the adjacent cold sample molecules in their scatterings to diffuse and spread, and since the "emptying" is perpendicular the fill up will be perpendicular too, and there it is heated and goes up too.

Basicaly, atmospheric wind are created from pressure differences from one area respective to another, so air molecule are pushed toward the lower pressure zone. This air molecules movement is called "wind".

After rearranging one can obtain the Venturi relation

When a region heats, and another region somewhere cools it creates a difference in pressure. Hot air rises, and it then goes towards the region of low pressure to equal the pressure at both regions.

Now, why does the air rise? I mean, why hot air rises. A simple explanation is:

Hot air is less dense and experiences a buoyant force, just like a bubble of air in water.

I found this question and was hoping to see an answer stated more specifically in terms of the molecules themselves. Of course pressure is meaningless at the molecular scale where only velocity and collisions enter in. Despite the wide variation in molecular velocities and directions wind is a superimposed bias in one direction. It is caused by a bias in the direction collisions come from. There is a lot to think about, the magnitude of wind velocity vs the distribution of "random" velocities, the mean path travelled between collisions, and how collisions give rise to emergent features like pressure and vortices. I like the answers I read but at the scale of molecules it is quite another thing.

Not the answer you're looking for? Browse other questions tagged fluid-dynamics atmospheric-science geophysics or ask your own question.

6
Can wind blowing on smooth water create speckle interference patterns?
1
Why does the wind direction vary locally?
1
What is the height of breeze/wind?
3
Wind velocity required to get a flag flying/waving - is there a formula to estimate this?
5
Why does saliva on the finger give correct direction of wind?
1
What produces high and low meteorological pressure areas?
0
Wind speed limit