Width of the decay of Higgs boson into dimuon

According to Standard model, the partial width of the decay of Higgs into dimuon (up to tree level) is: $$\Gamma\approx\frac{m_H}{8\pi} \left(\frac{m_{\mu}}{\nu}\right)^2$$ with the Higgs mass $m_H=125 GeV$, muon mass $m_{\mu}=0.106 GeV$, and the vacuum expectation value of the Higgs field $\nu=246 GeV$, apparently the decay width is extremely small. Then why is the width of the resonance peak in the plot from ATLAS so wide? If it's due to experimental errors then is there any meaning in comparing it with the theoretical result? I'm having trouble understanding this. Could somebody please explain it for me? 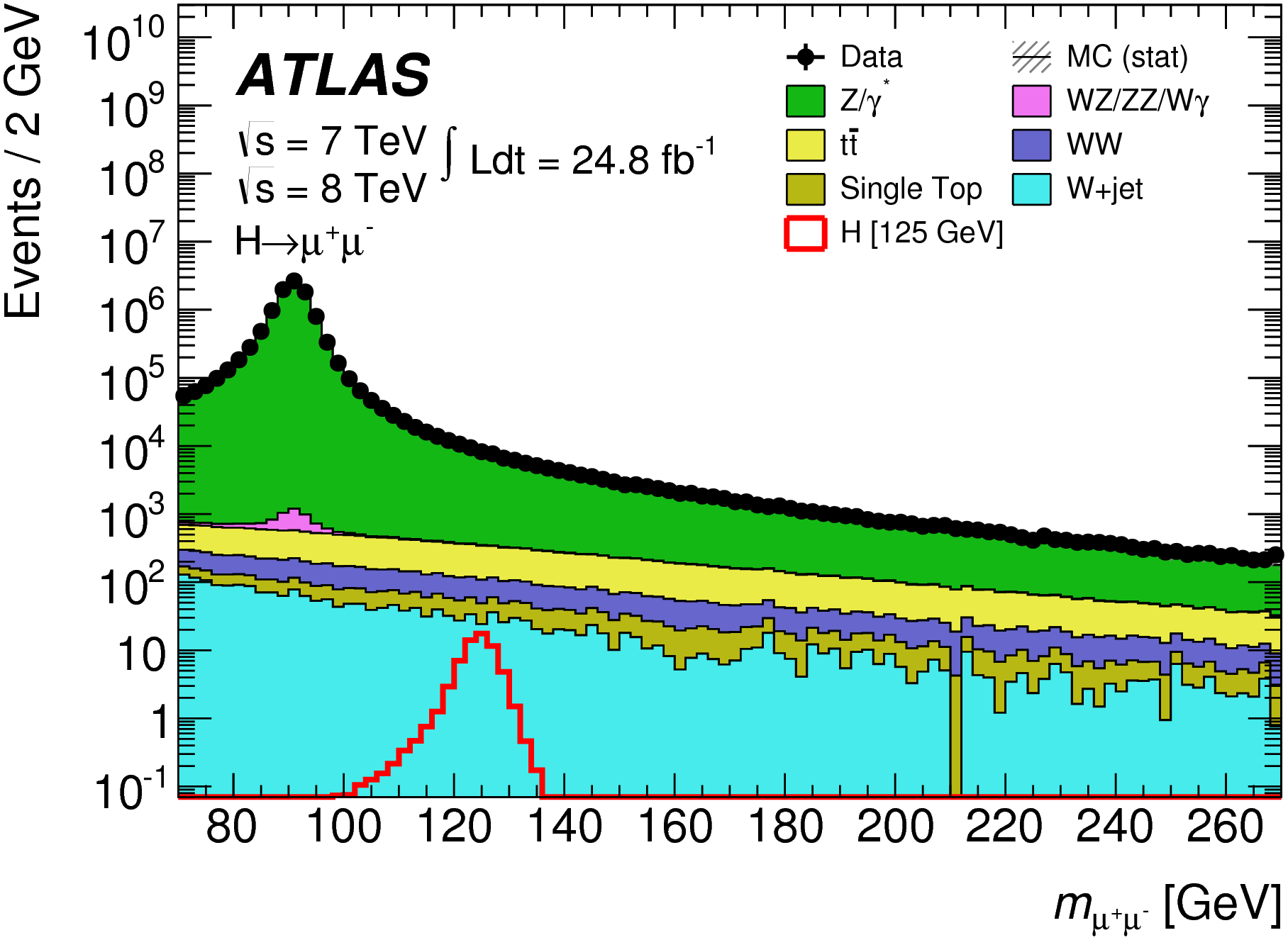 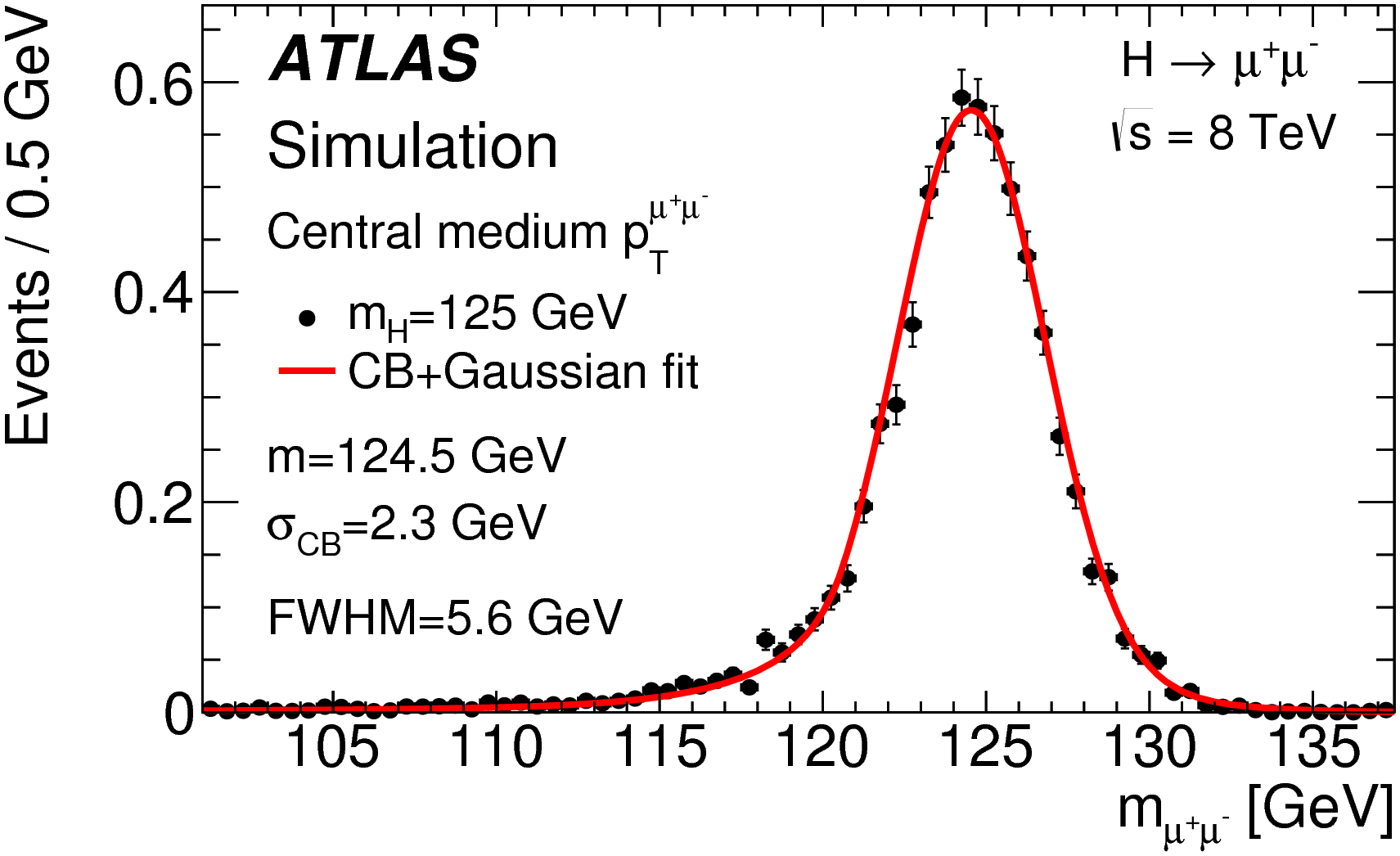 It is mainly measurement and detector errors that make up the width in the plots you show. The Monte Carlo simulates the detector resolution and folds in the theoretical values when it says that the width agrees. The real width is expected to be much smaller.

the CMS experiment has gotten the closest yet to pinning it down, constraining the parameter to < 17 MeV with 95% confidence. This result is some two orders of magnitude better than previous limits: stronger evidence that this boson looks like the Standard Model Higgs boson.

For a Higgs mass of ~125 GeV, the Standard Model predicts a Higgs width of ~4 MeV. Quite a low width, especially when compared to its compatriots, the W and Z bosons (with ~2 GeV and ~ 2.5 GeV widths, respectively). Before this new result, the best limit on Higgs width had it under 3.4 GeV, based on direct measurements.

So you were correct to be puzzled. The partial widths add up to the total width , that was how the width of the invisible neutrino decays of the Z have been found, by doing the sum and subtracting form the total. Leptonic machines have much better accuracies than hadronic. That is why the next collider will be a leptonic one, to study the Higgs accurately and nail down discrepancies to the standard model. Hadronic machines are just discovery machines.

The decay width of a particle is antiproportional to its lifetime. Looking at the partial width of the $H \rightarrow \mu \mu$ decay, one could expect that the lifetime of the Higgs is large. This would be correct, if the Higgs could only decay to muons. In other words: The Higgs decaying to muons has a low probability (a low branching ratio). This comes from the fact that the muon masses are relatively small, therefore the coupling of the Higgs to the muons is small too.

We can also look at this from the other way: The Higgs is heavy and there are no conservation rules that would prevent its decay, hence its lifetime is very short. A short lifetime means a large decay width. The total decay width is given as the sum of the partial decay widths:

Since $\Gamma_H^{tot}$ is large and $\Gamma_H^{\mu\mu}$ is small, we can conclude (again) that the branching ratio to muons is small.

In the nice plots from ATLAS that you show, the Higgs can decay to anything, hence we observe the large decay width, even when looking only in the muon spectrum.

Maybe this can be better understood by using Heisenbergs uncertainty principle. Since the lifetime of the Higgs is short, it's energy (mass) is not well known, it is smeared around its true mass. Thus when it decays, the invariant mass of the decay products is smeared as well, no matter what particles it decays to.

10
ATLAS Higgs Interpretation
6
Is a 125 GeV Higgs large (or small) for the MSSM?
9
How do you find spin of a particle from experimental data?
3
One-loop Higgs mass in the Standard Model
0
Higgs measurements at the LHC
2
Branching fractions for the 125 GeV Higgs boson
0
Calculating decay rate for $H \rightarrow W^+ W^-$
2
Why does neutral/EM meson decay scale as the cube of mass?