Rigid bar on the floor of a rotating space station

An easier method might be to just place a straight, rigid beam on the floor. If you find the floor is concave, you're probably on a space station. The technique you describe would only work on a relatively small station (which would therefore require a rather large angular velocity to achieve 9.8m/s centrifugal acceleration) where you would probably notice the concavity of the floor just by looking at it. This phenomenon would also be observed on Earth, but the angular velocity of the planet is sufficiently small that atmospheric drag tends to overshadow its affect on ballistic objects

The discussion was about distinguishing between real gravity and rotating space station. My question is what does the commentator mean by concavity of the floor?

Note: Since I have only a few reputation, I cannot comment on that answer to ask the commenter to explain it.

That the floor is not flat but circular, an the centrifugal force acts radially, and is the same at the same radius. If you cover the concavity of the floor with a planar surface or either make the stations of planar segments (a polygon instead of a circle), then you will measure different accelerations at different points of the floor, because they are not equidistant to the center of rotation.

what does the commentator mean by concavity of the floor?

He or she means that the surface you walk on is in fact the inside of a cylindrical surface. Like a very large version of the inside of a wedding-ring. The curvature of this surface can be measured. 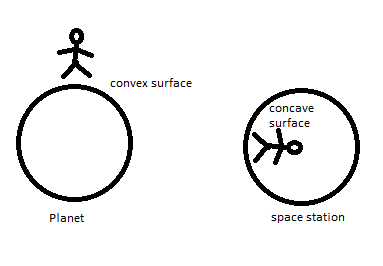 Not the answer you're looking for? Browse other questions tagged rotational-dynamics rotational-kinematics centrifugal-force centripetal-force or ask your own question.

22
Why does rotation simulate gravity if motion is relative?