Calculating the force required to lift a weight with a screw

I am trying to learn physics by myself as I do not have a good teacher at school. I've been reading Feynman Lectures on Physics and I can't figure out how he found out this number. Here is an excerpt of the book:

Let us now illustrate the energy principle with a more complicated problem, the screw jack shown in Fig. 4–5. A handle $20$ inches long is used to turn the screw, which has $10$ threads to the inch. We would like to know how much force would be needed at the handle to lift one ton ($2000$ pounds). If we want to lift the ton one inch, say, then we must turn the handle around ten times. When it goes around once it goes approximately $126$ inches. The handle must thus travel $1260$ inches, and if we used various pulleys, etc., we would be lifting our one ton with an unknown smaller weight $W$ applied to the end of the handle. So we find out that W is about $1.6$ pounds. This is a result of the conservation of energy. 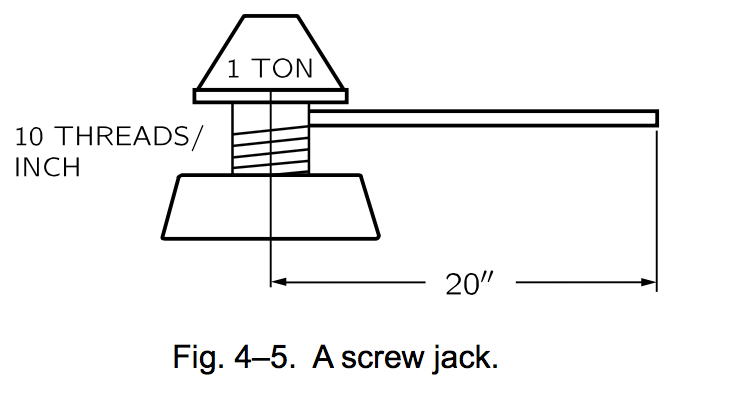 Here is my dimensional analysis:

I found this website, where you can find what I think is an email from an student reporting the teacher that he believes he got the number diving $\frac{5}{\pi}$ . Can you also explain me this?

Finally, in a thread in a Physics Forum question,they concluded that $1.6$ is just the force to keep the system at equilibrium, and you need $\text{a force} > 1.6$ to actually lift the ton. After, someone said that Feynman would have said this answer is wrong. Why is that?

Those who say that you need more than this force know that you need a short push to get the screw turning from a dead stop. This is similar to the fact that, even though you don't need any force to keep an object moving, you have to give it a push to get it moving in the first place. Once you've got the screw turning, you only need 1.6 lbs of force to keep turning it (ignoring friction).

From the geometry, you can state that in order to move the screw by 1 unit of distance, you have to move the end of the handle by $10\times 20\times 2\pi$ units of distance. Let's call the unit of distance $[L]$ - in this case, an inch might be a good unit but we don't have to be explicit about that.

Mathematically, we can say

so for a given force at the end of the handle, you know the force it can move on top of the screw is given by

Now you can express the force in pounds, Newtons, dyne, kgf, kip, pond, poundal, or whatever unit of force takes your fancy. Since the ratio of distances becomes unitless (the inches, in this case, cancel out) you can see that the two forces will have the same units. Dimensional analysis, in other words, works (it usually does).

You can see by simple manipulation that if the force exerted by the screw is 2000 units, the force on the handle must be $\frac{5}{\pi}$[units] as was stated.

As for the question of equilibrium vs motion: if the system is frictionless, then you need an infinitesimally small additional amount of force to set the system in motion (to accelerate it from rest) after which you can reduce the force to be exactly equal to $\frac{5}{\pi}$[units] in order to keep moving. At the end you can reduce the force slightly and the screw will come to rest. The total work done to move the mass up is independent of how much the mass was accelerated as long as it it at rest at the beginning and end of the exercise - and thus the average force will be exactly as calculated.

As David Richerby pointed out, because there is no friction, you need to maintain the force at all times in order to prevent the screw from spinning down again - but no work is done (in the physics sense) for just holding it still.

-2
What is the mechanism of a jackscrew?