Can neutrinos travel faster than the speed of light? [duplicate]

Possible Duplicate:
Superluminal neutrinos
What would be the immediate effects if light does not go at the maximum speed possible?

This is a hot topic right now, so I thought we should get a question going on it and hopefully keep it up to date with the latest evidence for or against this discovery.

Scientists around the world reacted with cautious shock on Friday to results from an Italian laboratory that seemed to show that certain subatomic particles can travel faster than light.

The journey would take a beam of light around 2.4 milliseconds to complete, but after running the Opera experiment for three years and timing the arrival of 15,000 neutrinos, the scientists have calculated that the particles arrived at Gran Sasso 60 billionths of a second earlier, with an error margin of plus or minus 10 billionths of a second. The speed of light in a vacuum is 299,792,458 metres per second, so the neutrinos were apparently travelling at 299,798,454 metres per second.

Ignoring the boilerplate media hype about the possibilities of time travel and alternate dimensions - I'm looking for academic sources that might suggest how this could be true, or alternatively, how this discrepancy could be accounted for.

I read the article published with their findings. It looks like they took an insane amount of care with their measurement of distance and time.

One of the most common skepticism of people who know nothing about the experiment is stuff like:

You might worry about[...] have they correctly accounted for the time delay of actually reading out the signals? Whatever you are using as a timing signal, that has to travel down the cables to your computer and when you are talking about nanoseconds, you have to know exactly how quickly the current travels, and it is not instantaneous. [2]

This experiment doesn't use that sort of 'stopwatch' timing mechanism though. There is no 'T=0', and no single firing of neutrinos. What is detected is watermark patterns in the steady stream of particles. The streams at the input and output are time stamped using the same satellites and any position along each stream has a precise time associated with it. By identifying identical patterns at input and output streams, they can identify how long it took particles to travel between the points. [1] 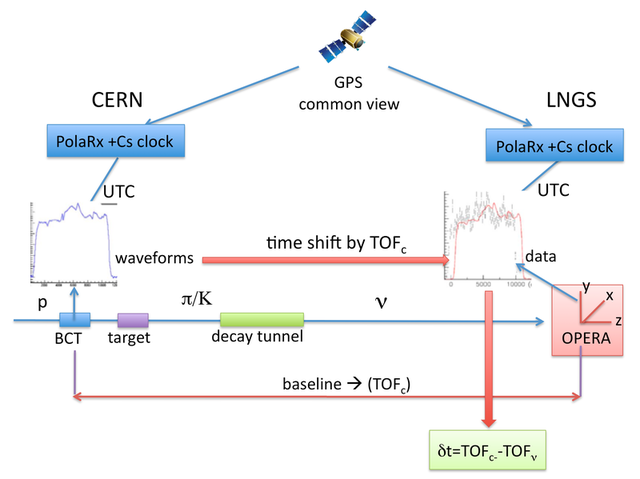 As for distance, they use GPS readings to get the east, north, and altitude position along the path travelled to great precision. So much so that they even detect slow earth crust migration and millimetres of changes in distance between source and destination when something like an earthquake occurs. When your particles are travelling on the scale (730534.61 ± 0.20) metres, this is more than enough precision: 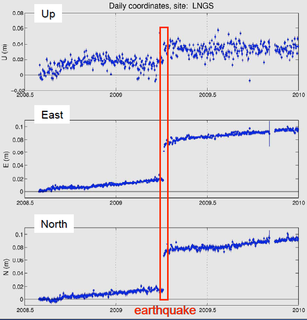 It's going to take a lot more than grassroots skepticism to think of what could have caused this discrepancy. I've seen suggestions such as the gravity of the earth being different along the path of the neutrinos, which warps space/time unevenly. The neutrino might not actually be travelling as far as they think if space/time is contracted at one or more points along the path where gravity varies.

Anyways, I'll be interested in seeing how it pans out. Like most scientists, my guess is an unaccounted for systematic error (because they definitely have statistical significance and precision and on their side) that has yet to be pointed out, but it probably won't take too long with all the theoretical physicists that will be pouring through this experiment.

Browse other questions tagged speed-of-light neutrinos or ask your own question.

89
Superluminal neutrinos
21
What would be the effects on theoretical physics if neutrinos go faster than light?
1
What are the implications of the speed of light broken?

12
If neutrinos travel faster than light, how much lead time would we have over detecting supernovas?
65
Where are all the slow neutrinos?
3
Why only charged particles can emit Cherenkov in glass (and Neutrinos themselves not)
2
How do we exactly use neutrinos to probe the core of the Sun (if they can only interact weakly)?