How did Rutherford's gold foil disprove the plum pudding model?

What stops one of the two following scenarios from happening, consistent with the plum pudding model?

Followup: did they know anything about the spacing of these plum-pudding atoms? Did they expect them to be lined up in a grid-like way; difficult to penetrate?

I am a physics undergraduate, I've only taken an intro QM class, it would be nice if that were kept in mind while answering.

The $\alpha$ particle, attracted by the electrons on the outer shell of the pudding, orbits nearly parabolically around the atom, causing the near-180 degree deflection angle seen.

This wouldn't happen because of momentum conservation. It was reasonably established in 1909 (when the gold foil experiment was done) that electrons were light, so if an alpha particle were to be reflected by interaction with an electron, the electron would be kicked out of the gold atom with even higher velocity in the opposite direction. $v_e \approx \frac{m_\alpha}{m_e}\Delta v_\alpha$

A gold nucleus is much more massive than an alpha particle, so it can reflect the alpha particle without recoiling very strongly itself.

The $\alpha$ particle hits a plum pudding nucleus directly, and because the nucleus consists largely of positive charge, it is deflected by nearly 180 degrees.

This is the plum pudding model of the atom 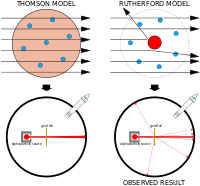 There are no electrons and no outer shells, quantum mechanics was yet to come when the experiment was done and the plum pudding proposed. They knew of atoms, and they though since they were neutral that the charges and masses were distributed evenly within the the atom.

. According to the then-dominant plum-pudding model of the atom, where the small negative electrons were spread through a diffuse positive region, backscattering of the high-energy positive alpha particles should have been nonexistent.

Parabolic as a solution could not come to 180 degrees because the masses were considered similar in the plum pudding.

There are no nuclei in the plum pudding.

Based on thomson's model, all of the alpha particles should go through or reflect back but in Rutherford's experiment, it was more of in between, some reflecting back and some going through, disproving the theory.

Not the answer you're looking for? Browse other questions tagged quantum-mechanics experimental-physics atomic-physics history or ask your own question.