Ball Rolling Down An Inclined Plane - Where does the torque come from?

There is a ball rolling down an incline, with no slipping. If we consider the point of contact between the ball and the inclined plane to be the pivot point (for our torque calculations), then I have noticed that friction is no longer in play, and gravity (and normal force) is the reason for the torque. However, if we consider the center of mass of the ball to be the pivot point, friction is the only factor, since both the normal force and gravity effect the center of mass (so the net torque caused by them is 0, since the pivot is the center of mass). However, both of these produce different torques.. for different reasons. So my question is,

Is gravity the reason a ball rolls, or is friction? And why?

[Note: This is not homework, it is a genuine question I had while looking at some physics problems.]

In these cases it always helps to draw a diagram: 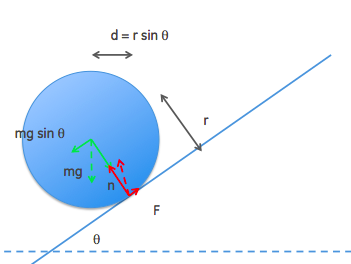 The green vectors represent the force of gravity $w=mg$ (dashed) and its components along the inclined plane and perpendicular to it. The red forces are the normal force of the plane on the ball $n$, the force of friction $F$, and their vector sum (dashed).

Now the sphere rotates about the contact point - that is the point that doesn't move. In that frame of reference, noting that the red vectors all pass through the center of rotation we compute the torque as the force of gravity $w$ times the perpendicular distance to the pivot point $d= r\sin\theta$, i.e. $$\Gamma = w\cdot r \sin\theta$$ and we consider the moment of inertia of the ball about this pivot to be $$I = \frac25 mr^2 + mr^2=\frac75 mr^2$$ (by the parallel axes theorem).

As you pointed out, by considering the motion about the contact point, the value of $F$ doesn't seem to come into play. But remember that the center of mass of the sphere must accelerate as though all forces are acting on it; after canceling out the normal forces, that leaves us with $mg\sin\theta$ down the slope, and $F$ going the other way. The difference between these two forces gives rise to the acceleration of the sphere's c.o.m. so we can compute $F$ from

To compute $a$, we first need the angular acceleration $\dot\omega$which is found from

From which it follows that

And if we know that, we can now compute the angular acceleration of the sphere about its center. The torque seen in the frame of reference of the sphere is

Now we use the moment of inertia of the sphere about its center in order to compute the angular acceleration, and find

which is the same result as before.

So there is no contradiction. The forces of friction and gravity work together to cause the rotation - the difference in apparent torque comes about from the fact that you are working in different (and non-inertial) frames of reference, but if you do the calculation carefully you get the same answer.

If we consider the point of contact between the ball and the inclined plane to be the pivot point (for our torque calculations), then I have noticed that friction is no longer in play, and gravity (and normal force) is the reason for the torque.

You have two choices for that point. Do you mean the point at rest on the ramp (only touching for an instant) or the moving point that is always touchting?

For the first choice, gravity does indeed provide a torque, but that torque is not going completely into rotation. Some of it is going into changing the angular acceleration of the ball that is due to its motion. That momentum is frame dependent.

For the second choice, since the ball is accelerating, the contact point is at rest only in a non-inertial frame. As such, there are fictitious forces that appear. You need to add a pseudo-force that operates on the ball's center of mass in the opposite direction of the acceleration. When you add in that pseudo force, the torque matches that when calculated around the center of mass.

4
A ball rolling at the bottom of a spherical bowl
1
Rolling in smooth inclined plane
45
What will happen to a ball kept on a frictionless inclined plane?
3
Why do heavier objects fall faster on hills but not in straight drops?