According to the initial mass function, should there be more brown dwarfs than red dwarfs?

According to the IMF and the stellar mass distribution, stars become more abundant the less massive they are. And while objects must have a mass > 0.075 solar mass to become a star, brown dwarfs with masses lower than this form by the same way as these stars. So would that mean that there are more brown dwarfs than red dwarfs in the galaxy according to this distribution ? 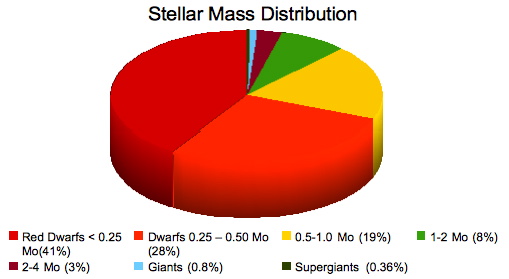 There are several commonly used analytic approximations for the initial (birth) mass function (IMF) that cover both stars and brown dwarfs. It is not yet absolutely certain which of these is more correct at the low-mass end, whether there is a lower mass cut-off as one approaches planetary masses, or whether the fraction of brown dwarfs (BDs) to stars varies depending on the birth environment. These are all active areas of research. However all of the modern IMFs predict that the IMF changes from being a Salpeter power law ($\phi(m) \propto m^{-2.3}$) at higher masses to one starts to flatten below about $0.5M_{\odot}$ and then falls at even lower masses.

Let us take the most commonly used analytic form, the Chabrier lognormal IMF. This claims that the number of stars/BDs as a function of their logarithmic (base 10) mass is given by $$ \phi(m) \propto \exp \left(- \frac{(\log m - \log m_c)^2}{2 \sigma^2}\right),$$ where the parameters of the model are a ``peak mass'' $m_c$ and a width to the lognormal function $\sigma$. In its most recent formulation, Chabrier (2005) suggests that an IMF with $m_c = 0.2M_{\odot}$ and $\sigma=0.55$ universally fits the observed mass functions of both the nearby field and young open clusters.

We can use this parameterisation to explore your question. Let us class a ``red dwarf'' star as something with $0.075 < M/M_{\odot} < 0.5$ and a brown dwarf as something with $0.01 < M/M_{\odot} <0.075$. As I said above, what the lower limit should be is a matter of current research, but as the IMF is falling steeply here, the exact value does not change the conclusion.

Brown dwarfs are much less numerous than red dwarfs.

Not the answer you're looking for? Browse other questions tagged astrophysics stars galaxies observational-astronomy brown-dwarfs or ask your own question.

3
Could the estimated stellar mass for the Milky Way galaxy include brown dwarfs?

3
Is there a way to tell what centile of the overall sample a star's mass is in?
3
How can the Andromeda Galaxy alone have more mass than the Local Group?
8
What is the luminosity of the Milky Way galaxy?
3
Could the estimated stellar mass for the Milky Way galaxy include brown dwarfs?
6
What does this stellar mass distribution mean?
3
What is the average mass of galaxies according to Hubble Deep and Ultra Deep field observations?
3
What would a very massive rocky body look like?
2
Can the lithium test be applied to differentiate brown dwarfs from other substellar objects?
2
If I add more mass to a red giant, will it become a supergiant?
3
What's lowest mass object that can form from collapsing gas?