What would Earth have been without the Moon?

Would Earth rotation have been more slowed down because of the tidal effect from the Sun, as seems to be the case with Mercury and Venus? Due to the giant impact hypothesis the angular momentum from the impact was increased and split.

If Earth not would have been a two part angular momentum system, but a single planet with the same rotation at that time as it have today, what would the tidal effect from sun have done to earth?

Are there any theories meant to explain the distribution of angular momentum in the Solar system? Roughly!

The reason for my interest is of course the question how important the Earth-Moon system's creation was to the development of which we are a part. It's a pretty well-shaped planet we live on. 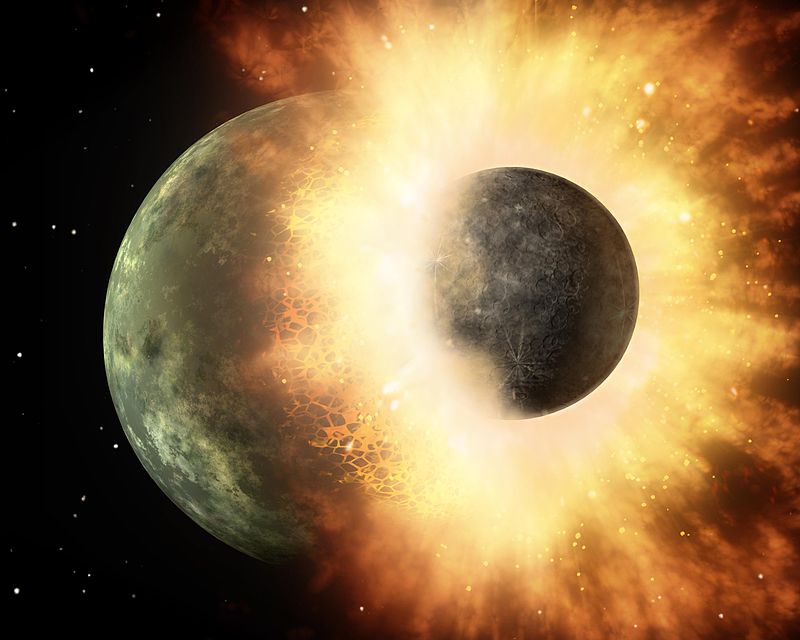 Tidal forces drop rapidly with distance - the derivative of $1/t^2$ is $-2/r^3$. Further, the difference in radius of the orbits of Earth and Mercury is a little more than a factor 3x and radius of mercury is about 2.5x smaller than that of earth.

From the orbits we gather the tidal effect is 27x smaller - from the radius we gather that moment of inertia is about 100x larger. The tidal torque probably scales with radius, so the final effect of tidal drag (rate of deceleration) on a moonless earth is about 1000x smaller than for Mercury.

Given that Venus is also not tidally locked it is reasonable to assume that Earth, even without the moon (and the impact that caused it) would probably still be rotating.

Of course without the lunar tides, there might have been no tidal pools and no evolution as we know it... But I think there would still be days and nights. Weekends might last a little bit longer, is all.

As shown in a previous answer,

Assuming they have the same density (the Sun's average density is not much smaller than that of the moon) , if they had the same apparent size in the sky, then the mass M of the object will grow as r3 (because M=4/3ρπR3 and R=θr), so the force actually grows linearly with r.

this implies that for same apparent size and density the tidal force is independent of distance , that is, the tidal force of an object of the same aparent size and same density doesnt change with distance. The apparent sizes on the sky of the Sun and the moon are about the same (imagine a total eclipse), although the density of the moon is about 2.3 larger that than of the Sun. Thus, asuming we were still rotating, we would still have tides, although a bit smaller in magnitude.

If the moon were not present the rate of precession would be much less than the current figure of 1.4 degrees per century. More seriously, the tilt of the earth's axis would vary over a much greater range than at present and this could have grave consequences for the climate which would show much larger variations than have been known up to now. The emergence of life could be made more difficult, or possibly easier, I can't say.

Not the answer you're looking for? Browse other questions tagged orbital-motion solar-system celestial-mechanics tidal-effect or ask your own question.

8
Does a tidally locked planet have seasons?
10
What if the Moon was 100x more massive: Binary planets?
5
Conservation of angular momentum in Earth-Moon system
1
Could this planetary superalignment happen?
4
Is there a prediction when our solar system would fall apart?
2
How would a gradual joining of the Earth and Moon affect their orbits?
3
How the moon takes energy from Earth (if at all)?