How are the half life of particles mathematically related to the inverse square laws?

This video https://www.youtube.com/watch?v=K6i-qE8AigE&list=PL3B0924C6A0CB8B67 explains how forces are boson particles. It talks about the other non-force particles giving off and creating bosons, which then decay, or disappear, or run out of energy. The bosons given off interact with other bosons given off, which macroscopically is experienced as force.

My immediate question then was, "how do the half-lives of bosons result in the inverse square law for gravity, the inverse x^4 law for other forces, and so on?"

And then the relativity stick comes a knocking to complicate things even further...

For a simple classical explanation, you can think of it as follows. If the force is mediated by a stable boson that doesn't decay, such as a photon in the case of electromagnetism, then the number of photons emitted by a charged particle will be conserved, unless of course another charged particle comes along and eats the photon. If the latter happens, then you have an electromagnetic interaction. But until the photon hits another charged particle, it won't just suddenly disintegrate (this is in contrast to the bosons that mediate the strong and weak nuclear forces, which are exponentially suppressed at long distances).

So let's say that we have two electrons, separated by a distance $r$. The first electron emits $N$ photons, and these spread out in random directions at the speed of light. When these photons reach the distance $r$ from the first electron, then all these photons will lie at a spherical shell of radius $r$, and the surface area of such a shell is $4\pi r^2$. This means that the concentration of photons at any part of this spherical surface will now be $N/4\pi r^2$. So this is a simple explanation for why the electromagnetic force is a $1/r^2$ force: because $1/4\pi r^2$ is the ratio of photons emitted by the first charged particle that actually reaches the second charged particle.

(If you want a more rigorous and mathy explanation, then I think there was one in the first few chapters of Quantum Field Theory in a Nutshell by Zee.)

you must have misunderstood.

You are talking in words about virtual exchanges of gauge bosons, but first order interactions are between particles exchanging a gauge boson. Photon photon interaction is very weak, and the same is true for the W and Z. This is a typical interaction: 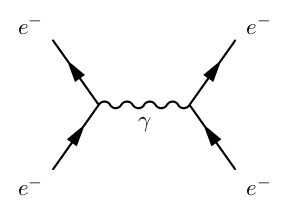 One possible Feynman diagram for electron-electron scattering: electrons (labeled "e") repel each other because one spits out a photon ("γ") that hits the other. Our rules take care of everything else. The photon trajectory is horizontal because I'm still learning the graphics package to draw these diagrams.

The above quote for the figure is in as a naive language but it correctly states the exchange of a boson between two particles to build up the force of interaction.

All this picture of exchanged particles comes from the language of Feynman diagrams, which diagrams are very useful in ordering the method of computing interactions between elementary particles. The exchanged particles are called virtual particles because they cannot be measured independently, and their four vector does not have the mass of the particle it is labeled with, only the other quantum numbers. It is heuristic to talk of them as building up the forces we see macroscopically, a mathematical representation of what really happens when one sets the 1/r potentials in the quantum mechanical equations and computes the interactions.

There are no half lives for these virtual bosons. They are just a part of the integral to be computed to fit the specific measurements, in the above case electron electron scattering.

Just to elaborate on the above excellent answers, the inverse square law results from being in 3 spatial dimensions. It's what you get when you solve Laplace's equation in 3 dimensions, which roughly follows from solving the wave equation for these force particles' wave-functions. This results from the potential energy being an inverse $r$ law: $$V_\text{Coulomb}(r)= -\frac{g^2}{r}$$

Now, if the force particles have mass, then the wave equation is different. In particular, the potential energy between two particles that exchange a massive intermediary, is given by the Yukawa interaction: $$V_\text{Yukawa}(r)= -g^2\frac{e^{-kmr}}{r}$$

Not the answer you're looking for? Browse other questions tagged forces particle-physics or ask your own question.

3
How do particle scattering cross sections scale with energy in colliders?
4
Combining Proportions to get Newton's Law of Universal Gravitation
10
Why doesn't my particle simulation end in a flat disc?
2
What laws (formulas) govern forces between atoms?
1
Force with different distance dependence
1
Do force fields come from potential fields, or do potential come from forces?
1
Two People Pushing Off of Eachother, Newton's Third Law, and Unbalanced Force