Why can we inflate the balloon?

I have an elementary question:

I know from experiences that human can inflate (or fill with water) the standard ballon or latex medical glove. But I know also that in rubber/latex there are a pores.

Why can we do it? Which physical effect is responsible for this? How big could be holes in elastic material to one still be able to inflate balloon?

Natural rubber latex is made from the milk juice of various plants such as Hevea brasilensis. It contains a polymer called cis-1,4-polyisoprene with long molecular chain (typ. C-15,000) which is typically 'vulcanized' using sulphur to form strong lateral connections, thereby creating a durable elastopolymer matrix with high strength, durability and capable of high elongation before break. It is popular in surgical gloves, condoms and balloons. The inter-molecularly polymerised rubber material naturally has tiny 'gaps' or 'pores' between the individual polymer chains, as shown in the image below (taken with a scanning electron microscope).

These 'pores' expand significantly when the latest is stretched, as shown in the image below. The size and shape of the pores varies with elongation and tensile stress, as the links in the polymer can break under strain. 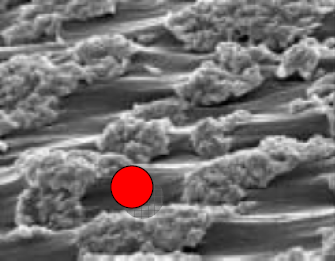 The effect of a gas passing through a small hole, such as the pores in latex rubber, is called effusion.

For small molecules of gas (such as helium or oxygen/nitrogen found in air), Graham's law of effusion states: Rate of effusion is inversely proportional to the square root of either the density or the molar mass of the gas. For this reason, helium will leak out of a balloon within a few days, whereas air will take several weeks.

The 'diameter' of water molecules (~0.29nm) is nearly twice as a these diatomic gases. Although the pore size in latex balloons is considerably larger than this (~microns), the water molecule is not 'linear' like the diatomic gas molecules. This gives the water molecule a 'polarity' (ie: slight positive charge in the region of the hydrogen atoms and slight negative charge in the region of the oxygen atom), which results in the formation of strong hydrogen bonds between adjacent water molecules, making the water 'stick together', with a 'surface tension' which keeps it together. The latex on the other hand is non-polar and 'hydrophobic', meaning it will 'repel' water, so the water will not normally get through the latex pores under 'normal' pressures.

Latex gloves for use in surgical applications are tested for permeability of water and air in accordance with international standards ISO 10282 and EN455. 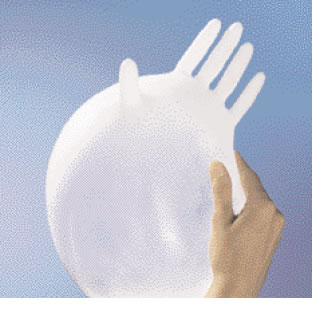 Although all latex products have an intrinsic pores in the micron size range, they do not generally go all the way through the glove, causing the glove to leak. Some research suggests that penetration of nanoparticles and HIV-sized viruses may be possible, although in the case of condoms, some reports indicate that leakage rate through the pores presents a lesser risk than tearing. Some manufacturers offer product which have been tested to ASTM F1671/F1671M, which uses a surrogate microbe (Phi-X174) similar in size and shape to Hepatitis (B and C) and HIV viruses.

Surgeons typically wear two sets of surgical gloves which are changed at least once every hour.

2
How do I figure out the momentum of a water balloon when it reaches the person I am throwing it at?
1
What causes the balloon to pop when we push with needle onto it's surface?
1
Water Balloon Under the Ocean
58
When a balloon pops and lets a brick fall, where does the energy come from?
0
How might one design an infinity balloon without an appropriate material