Why aren't there spherical galaxies? [duplicate]

According to the Wikipedia page on Galaxy Types, there are four main kinds of galaxies:

Now, from what I can tell, these all appear to be 2D, that is, each galaxy's shape appears to be confined within some sort of invisible plane. But why couldn't a galaxy take a more 3D form?

So why aren't there spherical galaxies (ie: the stars and other objects are distributed within a 3D sphere, more or less even across all axes)? Or if there are, why aren't they more common?

This whole question is a mistaken premise. There are spherical (or at least nearly spherical) galaxies! They fall into two basic categories - those elliptical galaxies that are pseudo-spherical in shape and the much smaller, so-called "dwarf spheroidal galaxies" that are found associated with our own Galaxy and other large galaxies in the "Local Group".

Of course when you look at a galaxy on the sky it is just a two dimensional projection of the true distribution, but one can still deduce (approximate) sphericity from the surface brightness distribution and large line of sight velocity distribution for many ellipticals and dwarf spheroidals.

Dwarf spheroidal galaxies may actually be the most common type of galaxy in the universe.

These galaxies are roughly spherical because the stars move in orbits with quite random orientations, many on almost radial (highly eccentric) orbits with no strongly preferred axes. The velocity dispersion is usually much bigger than any rotation signature.

There is an excellent answer to a related question at Why the galaxies form 2D planes (or spiral-like) instead of 3D balls (or spherical-like)? 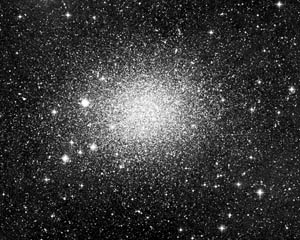 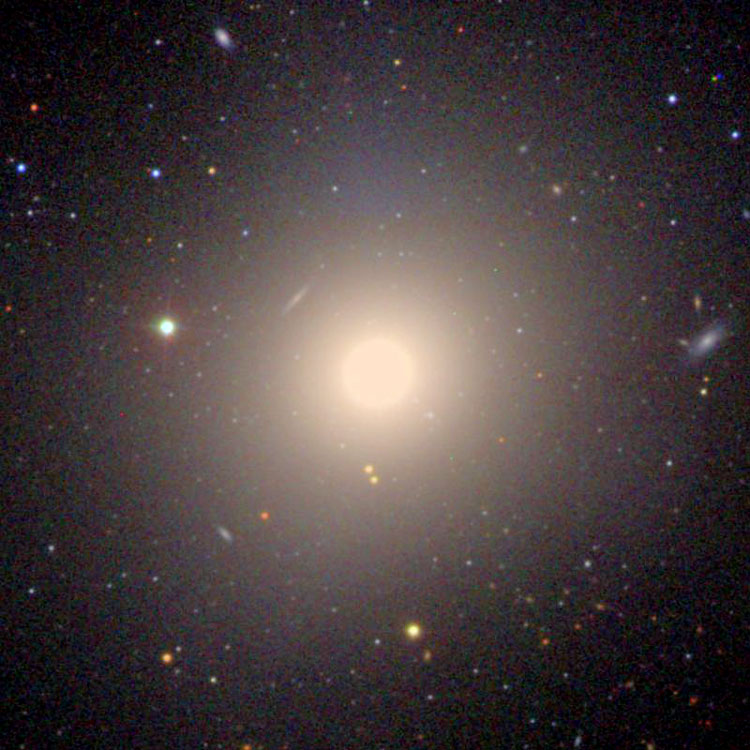 Details: I have found a couple of papers that put some more flesh onto the argument that many elliptical galaxies are close-to spherical. These papers are by Rodriquez & Padilla (2013) and Weijmans et al. (2014). Both of these papers look at the distribution of apparent ellipticities of galaxies in the "Galaxy Zoo" and the Sloan Digitized Sky Surveys respectively. Then, with a statistical model and with various assumptions (including that galaxies are randomly oriented), they invert this distribution to obtain the distribution of true ellipticity $\epsilon = 1- B/A$ and an oblate/prolate parameter $\gamma = C/A$, where the three axes of the ellipsoid are $A\geq B \geq C$. i.e. It is impossible to say whether a circular looking individual galaxy seen in projection is spherical, but you can say something about the distribution of 3D shapes if you have a large sample.

Rodriguez & Padilla conclude that the mean value of $\epsilon$ is 0.12 with a dispersion of about 0.1 (see picture below), whilst $\gamma$ has a mean of 0.58 with a broader (Gaussian) dispersion of 0.16, covering the whole range from zero to 1. Given that $C/A$ must be less than $B/A$ by definition, this means many ellipticals must be very close to spherical (you cannot say anything is exactly spherical), though the "average elliptical" galaxy is of course not.

This picture shows the observed distribution of 2D ellipticities for a large sample of spiral and elliptical galaxies. The lines are what you would predict to observe from the 3D shape distributions found in the paper. 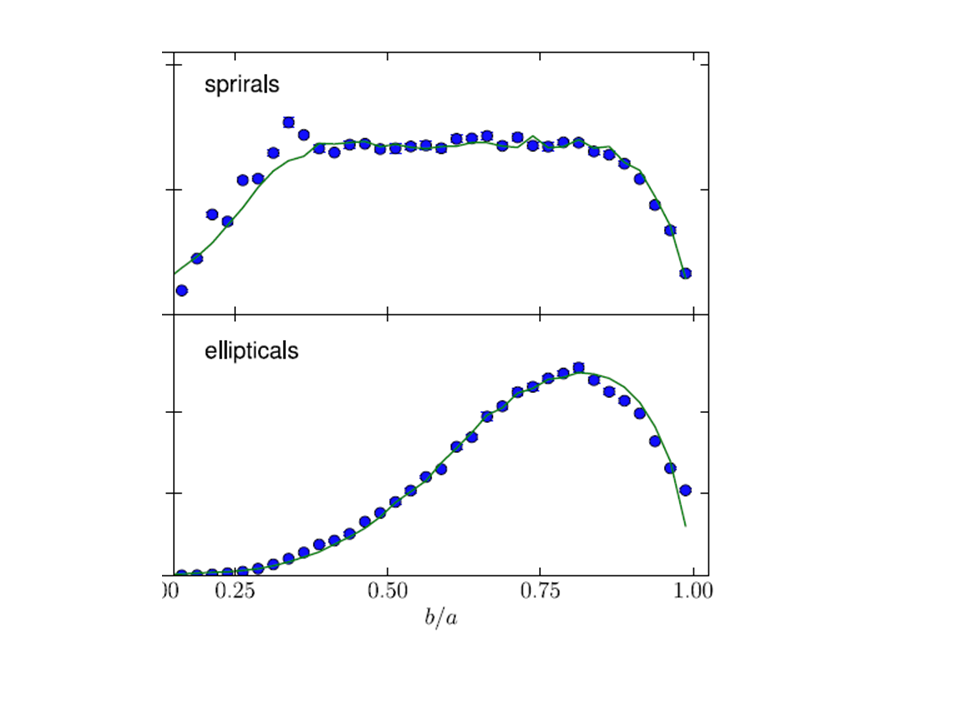 This picture from Rodriguez and Padilla show the deduced true distributions of $\epsilon$ and $\gamma$. The solid red line represents ellipticals. Means of the distributions are shown with vertical lines. Note how the dotted line for spirals has a much smaller $\gamma$ value - because they are flattened. 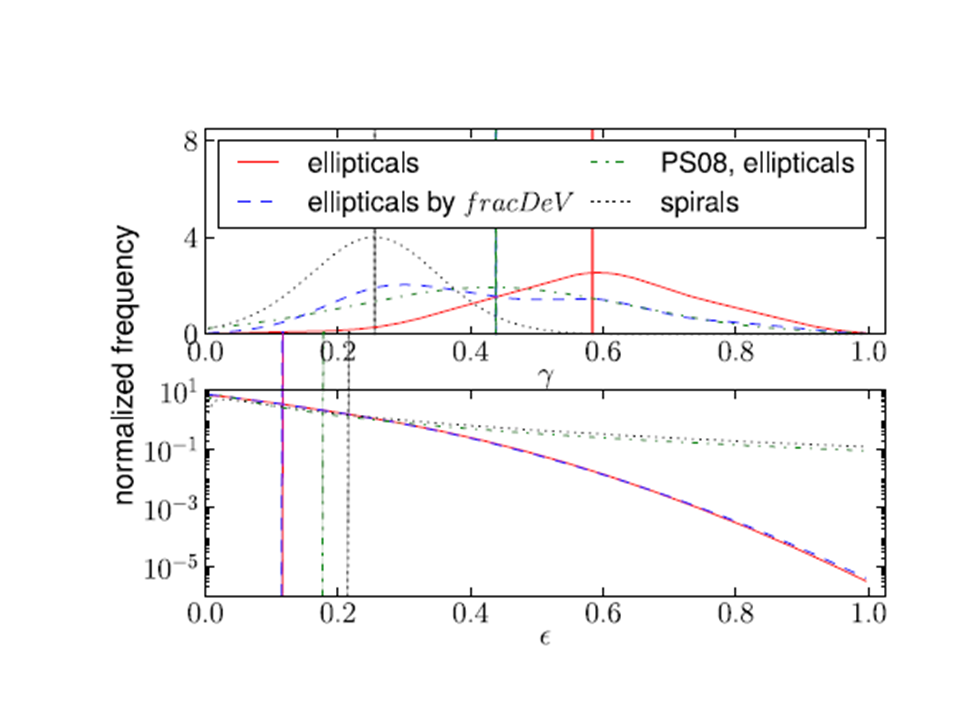 Weijmans et al. (2014) perform similar analyses, but they split their elliptical sample into those that have evidence for significant systematic rotation and those that don't. As you might expect, the rotating ones look more flattened and "oblate". The slow-rotating ones can also be modelled as oblate galaxies, though are more likely to be "tri-axial". The slow rotators have an average $\epsilon$ of about 0.15 and average $\gamma$ of about 0.6 (in good agreement with Rodriguez & Padilla), but the samples are much smaller.

Actually, there are parts of a galaxy that extend beyond the galactic plane:

I list these as examples to show that not all objects stay in the galactic plane. The other answers should give you an idea of why most objects do stay in the plane.

All matter in the galaxy has to rotate (not necessarily in the same direction) so that a centrifugal force acts. Without the centrifugal force, all matter contained in the galaxy will collapse into the center of the galaxy due to gravitation. The rotation happens about an axis, a line about which all matter revolves in the galaxy. Now, the manner in which all the matter revolves around that axis is planar. Why is it planar and why does it have to rotate about an axis only? The answer to this question will decisively clear that doubt.

But how does the planar galaxy continue to retain planarity for billions of years?

Let's imagine that a planar galaxy has a few bodies which don't revolve around the central axis and have their own axis of rotation. In any direction perpendicular to that axis, centrifugal force keeps the body from collapsing into the center of the galaxy. In any direction parallel to that axis however, there is no such centrifugal force; but there is a component of the gravitational force from the matter contained in the planar galaxy below. This component of gravitational force keeps pulling the body toward the plane, and there is no force to stop it. Thus, even this body will eventually join the galactic plane. All such fringe bodies which do not obey to the galactic plane will be attracted by gravity to eventually join the plane. Therefore the galaxy manages to maintain planarity.

It is due to the combined effect of rotation and "dissipation". A rotating cloud of gas consists of particles which interact strongly with each other (colliding physically) on relatively short timescales can radiate away some of their energy and momentum by emitting photons. For both of these reasons, a dense cloud of rotating gas will collapse to form a rotating disk. But there are some star systems that do remain pretty spherical, they called globular clusters.

On the other hand, if the gas in a cloud forms stars very quickly, so that the particles in it are stars rather than atoms, then these stellar "particles" do not interact strongly on short timescales (for instance the time between direct collisions for a star in a globular cluster is > $10^{10}$ years, and globular clusters are pretty much spherical) can not radiate away their energy and momentum by emitting photons; they can emit gravitational radiation, but that's not as effective

For these reasons, a spherical cluster of stars will remain spherical for very long periods of time; much longer than the current age of the universe.

You mentioned elliptical galaxies, which the other answers haven't touched upon.

Contrary to your statement about the galaxies being 2D, elliptical galaxies are "3 dimensional" in the sense that the stars are not confined to one plane; You could think of them as being "egg shaped".

So why are elliptical galaxies not confined to a plane? Mostly because they (usually) have low angular momentum, i.e., they aren't spinning too fast about any axis, so the reasoning in Simha's answer no longer applies.

Also, it's worth noting that this doesn't mean that there is no spinning motion. The galaxy as a whole need not be rotating about an axis, but the stars within the galaxy will be. The stars will all be moving around fairly randomly within the elliptical galaxy, so the net angular momentum is near zero.

In contrast to a spiral galaxy, the galaxy as a whole has a very definite angular momentum, so in addition to the stars own velocity (often called it's peculiar velocity) the star will be rotating about the galactic centre in the same direction as it's neighbours, and indeed every other star in the galaxy.

Not the answer you're looking for? Browse other questions tagged gravity newtonian-gravity astrophysics angular-momentum galaxies or ask your own question.

56
Why the galaxies form 2D planes (or spiral-like) instead of 3D balls (or spherical-like)?
64
Why does everything spin?
12
Why don't stars have Keplerian orbits?
8
Why are stars spherical whereas (some) galaxies are disks?
4
Why is the Milky Way flat?
0
Why does most galaxies resemble a 2 dimensional plane?

5
Why are there not many detectable supernovae?
25
How do spiral arms form?
56
Why the galaxies form 2D planes (or spiral-like) instead of 3D balls (or spherical-like)?
4
What is the average mass of galaxies according to Hubble Deep and Ultra Deep field observations?
0
Gravitation and the structure of galaxies
8
Why are stars spherical whereas (some) galaxies are disks?
1
Galaxy Superclusters