While studying photoelectric in my school, my teacher drew a graph of current versus the potential difference across the two electrodes: 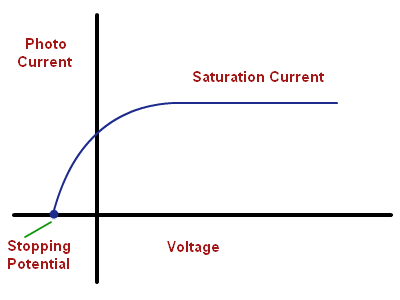 I am not able to understand why do we get saturation current. I know that at saturation current all the electrons emitted from the metal surface are able to reach the other electrode. My question is suppose we increase the potential difference between the two electrodes further. I think that one of the following two things should happen:

So in no case should we get a graph as shown in the link.

It may be that I have not understood the photoelectric effect completely. If that is the case please tell me where am i wrong?

In the photoelectric effect, photons incident on the cathode cause the emission of electrons. Assuming there is a sufficient electric field, these electrons will make their way across to the anode, contributing current.

Current is charge per unit time. If the electron has a charge $q_e$, then $N$ electrons per second carry a current

There is nothing here about the velocity of the electrons... not about the time it takes them to cross the gap. If they went 100 times faster, it would not change the number of electrons crossing the gap per second. That number is determined by "how many start the trip per second" and "how many don't make it". The second of these explains that the curve starts out not completely flat: very slow electrons may not make it, especially with a small retarding potential. But once they go fast enough to fully escape, their final speed really doesn't matter. And neither does the transit time in the wire.

Did you ever calculate how slowly electrons move in a current carrying wire (for example, copper wire)? While the electrical signal is very fast, the drift velocity of the electrons themselves is very very slow... because there are so many electrons per unit volume. But that is only tangentially relevant here.

I want to add to the answer by Floris, which explains the phenomenon correctly. Ask yourself the meanings of stopping potential and the saturation current.

The stopping potential is determined by the energy of the photons minus the work function of the material in question. Let's idealize the situation: For example, the work function of copper is 4.7 eV. Say if you have a light source and shine the copper with light of energy 5.7 eV then the stopping potential will be roughly -1 V. That is because, a photon with energy 5.7 eV hits an electron, electron uses 4.7 eV to free itself from the copper metal and gains 1 eV as kinetic energy. But it can never make it to the other electrode because it is stopped by the voltage. Increase the potential (that is go towards 0 and positive values) then the electron can make it to the other electrode and you get current.

In reality, however some of the electrons looses their kinetic energy even before they can escape from copper. That is, they end up with kinetic energies less than 1 eV and therefore they need a "push" to be able to reach the other electrode. As you increase the voltage you give that push to these poor electrons and make them reach the electrode and hence increase the current.

There nothing much to add to the beautifully scripted answers above.

Regarding the second point, The current flowing depends on the intensity of light. The electrons flow in the area between the plates in almost same speed as in the wire.

What is Current ? Current is flow of electrons in a given time i.e if the intensity of the light is Constant then Photons incident on Cathode (ejector plate) is also constant. As we know that minimum K.E, that photo-electron can have is 0 and max. is energy of the photons minus the work function of the material. And saturation current means flow of electron in a given time is constant i.e no. of electrons ejected from Cathode is constant as no. incident photons are constant.