Would a wormhole in space look like anything at all?

In movie "Interstellar", the wormhole is elaborately depicted as a sphere, complete with an explanation about why it is spherical, and as it is approached, it looks like a sphere containing fabulous galaxies etc.

If I have anything approaching a reasonable mental model, a wormhole is simply a region of space that has the property that if you traverse it you arrive at a different place in space than your apparent 3D trajectory would suggest. But it's still "just space". It doesn't have a "surface" or a distinct "entry point" or any particular features at all, does it?

Note: I appreciate that nothing in "Interstellar" should be taken as a representation of actual real world physics - it was simply the thing that triggered the question about real physics!

The site you linked to on the modeling of what theoretical wormholes would look like shows two reasons a wormhole could be visible: 1) the scene you see through it might not match the surroundings on your end, and 2) there's a lot of distortion of the image of any objects which from your perspective are near the "edge" of the wormhole. 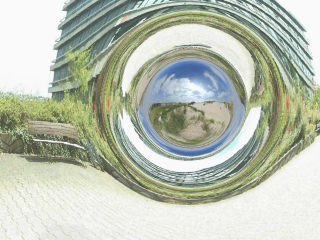 Both effects seem to be at play in the interstellar wormhole, if you look at the large image here. For 1), the image shows a bunch of nebula and a greater overall density of stars in the space on the other side, so that makes it stand out against the starfield on our side. And for 2), you can see that there's a lot of visual distortion in the shapes of the nebulas and things near the circular edge, not much at the center.

Kip Thorne, the physicist who was the science consultant for the movie, says in Chapter 15 of The Science of Interstellar that there were three main adjustable parameters or "handles" that they could use to find a look for the wormhole that Christopher Nolan and effects supervisor Paul Franklin liked best: the wormhole's radius, its length, and something called the "lensing width" which is determined by the curvature of space outside each "mouth". But for any given values of those parameters, they used the real theoretical predictions of Einstein's theory of general relativity to determine the wormhole's appearance:

Just as I had done for Gargantua (Chapter 8), I used Einstein's relativistic laws to deduce equations for the paths of light rays around and through the wormhole, and I worked out a procedure for manipulating my equations to compute the wormhole's gravitational lensing and thence what a camera sees when it orbits the wormhole or travels through it. After checking that my equations and procedure produced the kinds of images that I expected, I sent them to Oliver and he wrote computer code capable of creating the quality IMAX images needed for the movie. Eugénie von Tunzelmann added background star fields and images of astronomical objects for the wormhole to lens, and then she, Oliver, and Paul began exploring the influence of my handles.

The book also includes some pictures showing how the visual appearance of the wormhole changes when these three "handles" are adjusted in various ways. In particular he shows that the amount of distortion of objects near the visual edge of the wormhole depends on the "lensing width", which measures the sharpness of the transition from the throat to the space outside the wormhole's mouth--if transition is sharper, so the space outside becomes nearly-flat at fairly short distances, then there's a thinner region of distorted shapes at the edge.

Finally, at the end of the chapter Thorne notes that although they modeled the external appearance accurately, for the trip through the wormhole, the visual effects people took some artistic license, creating "an interpretation informed by simulations with my equations, but altered significantly to add artistic freshness."

1
Do wormholes have a side to their path through space?