To see what I mean take the sun as an example. We know precisely how many neutrinos are leaving the sun and we know that they are all produced through the weak interaction, and so all the neutrinos leaving the sun are left-handed. If the mass matrix above is correct then the neutrinos would begin oscillating with their right-handed counterparts.

Thus when we detect neutrinos on earth (through a detector that only notices the weak interaction) only half the neutrinos should be left-handed and we should see half the signal we expect. This is of course not the case since this model isn't ruled out. What am I missing?

Neutrinos interact in the Standard Model only through their left-handed component, via electroweak interactions. However, the propagating neutrinos, which are mass eigenstates, are described by a field that is a Dirac spinor, i.e. with both chiralities $$ \nu=\nu_L+\nu_R. $$ Therefore, when neutrinos are created or measured, the Dirac spinor is projected onto its left-handed component $$ \nu_L=P_L\,\nu=\frac{1-\gamma_5}{2}\nu. $$ This projection does not halve the number of counts, it just selects the interacting component of each Dirac spinor.

A reduction in the number counts is observed when oscillations among flavours are taken into account, and this is the effect measured by oscillation experiments.

The point is that there is no mass difference between left-handed and right-handed neutrinos. The mass is only defined for the complete field $\nu=\nu_L+\nu_R$. For this reason, I think it's not correct to use the oscillation probability formula to compute oscillations between LH and RH neutrinos.

I think I now have an answer. My problem was that I assumed how much neutrinos oscillated depended solely on their level of mixing. With that intuition it seems that neutrinos should oscillate significantly into their right handed counterparts. However, there is more to the story. Oscillations are also dependent on the difference of masses between the mass eigenstates. If mass eigenstates are degenerate no oscillations can't take place (I still don't really have intuition to why this needs to be true...).

Maximal mixing (the situation above) corresponds to the case where $\theta=45^o$ and we indeed have $\sin^2\theta=1$, a mixing enhancement. However, there is a second contribution dependent on the difference of the masses between the eigenstates. When this is zero (as above). The oscillation probability also becomes zero. 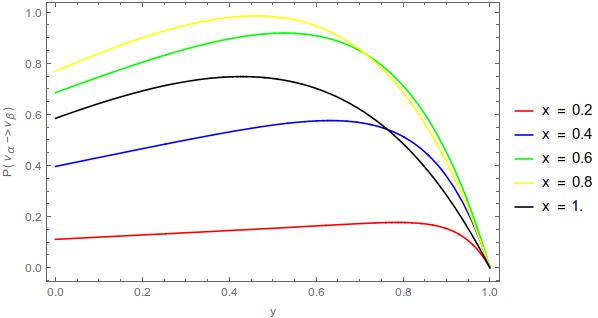 We see that at small $x $ (small mixing) and large $y$ (small mass difference) the oscillation probability vanishes. With this we see that number of measured neutrinos can put bounds on pseudo-Dirac neutrinos (ones with both Majorana and Dirac masses) but not Dirac neutrinos.

15
What was missing in Dirac's argument to come up with the modern interpretation of the positron?
15
Is Zitterbewegung an artefact of single-particle theory?
2
chirality oscillations in weak interaction
0
Theoretical supporting factors to consider neutrinos are majorana type particles or dirac type particles