Why are flight feathers asymmetric?

I've always heard that flight feathers were asymmetric because the shape generates lift, like an airplane wing airfoil shape. But, the feathers are not oriented with the shaft perpendicular to the body, but hang back from the arm and hand.

Looking around the web now, I found a vague statement saying it was for flexibility. I don't know what is meant by that.

I always hear that this shape is an indicator of flight, when interpreting fossils.

So why do the feathers have that characteristic shape?

Some looking through the literature reveals that this is possibly a topic of ongoing research in zoology, however some zoologists do cite a physics concern(PDF), a result in stability analysis, which might be a dominant reason for the asymmetry.

Some feather background: a feather consists of a thin shaft called the rachis and a flat surface which protrudes from it, called the vane. The vane is actually made of a bunch of little shafts called barbs which themselves have thin overlapping fibers called barbules protruding from them and interlinking to form the vane, and the barbules hook together by little notches called, appropriately enough, hooks. If you search for these terms you can find some sources online.

While we're at it let's talk about feather orientation. Here is what a Spanish Imperial Eagle looks like in flight, courtesy of Wikimedia Commons: 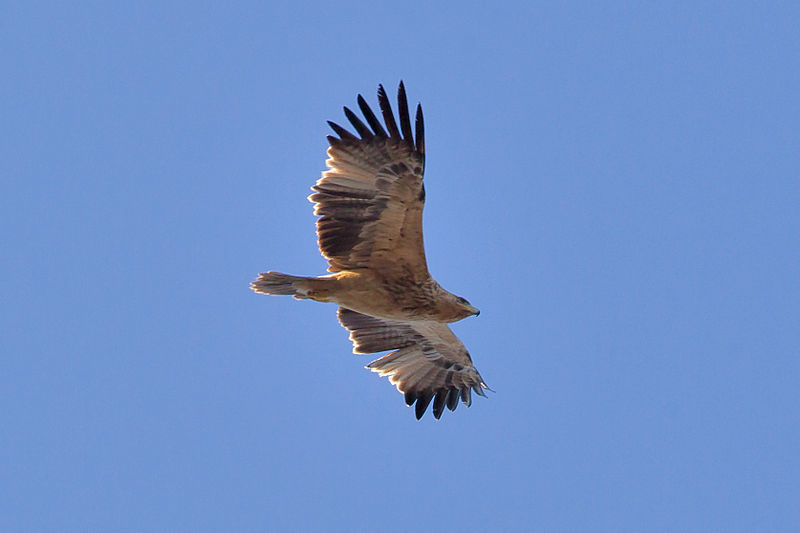 While I do not know whether I can include the relevant image here, an image of the feathers of this magnificent species is freely available here, apparently a preview for the (upcoming?) Feather Atlas for the Birds of the Western Palearctic.

The general pattern, comparing the two, could be summarized that the more forwards-facing the feather is in-flight, the more vane-asymmetry it displays. These backwards-facing feathers that all overlap each other anyways, do not seem to have nearly the asymmetry that the primary feathers have.

So what is this "stability analysis" reason? I will try to translate it into more normal speech. It is relatively simple: apparently in both flapping and gliding flight, you see the same pattern, which is that any flat surface will have a center-of-pressure roughly a quarter of the way down the vane, as measured from the leading edge to the trailing edge. This means that the pressure of the air in either flapping or gliding motions, acts equally on both sides of that "quarter-way-down" line that goes along the feather. So if you were to engineer the rachis exactly on this line, you would already see some asymmetry. At this tradeoff, flapping and gliding would not twist the vane around the rachis.

If the rachis were in the center, then the pressure would predominantly be felt by the leading edge of the feather, twisting it upwards. We would say it "increases the angle of attack" of the feather. You might think this is a good thing because generally as a surface increases its angle of attack, it increases its lift. However this is dangerous thinking: after a certain angle of attack, air no longer smoothly flows over the top edge but instead it forms a big stream of vortices above the wing, and you see an abrupt drop in lift at this "stall angle".

It is somewhat hard to twist an airfoil about a small, thin center, and as the feather gets longer you would need a great torsional stiffness so that muscles down near the base of the feather could affect the behavior at the tip of the feather. So an aspiring feather-engineer does not want to put the rachis to the center of this 1/4 line because it twists the feather upwards and this kills its lift. In fact, while the 1/4 line might be fine for some of the feathers, these primary feathers should probably be made self-stabilizing, which means that the rachis should lie forwards of the 1/4 line so that extra pressure tends to diminish the angle of attack.

This is also why tail feathers are nearly symmetrical, while the primary flight feathers exhibit the greatest degree of assymetry. The closer the rachis is to parallel with the airflow, the less relevant this effect becomes.

Concerns regarding the feather's center of lift not passing through the rachis are not especially relevant as the feathers are interleaved and can transfer forces to each other.

Not the answer you're looking for? Browse other questions tagged aerodynamics biophysics or ask your own question.

1
In-flight damage to a supersonic jet
7
Why airplanes fly: the final truth
15
Why is a beam reach the fastest point of sail on modern sailboats?
1
Simulating supersonic flight in game
2
Why wasn't the Stipa-Caproni plane efficient in its flight?