Why is less force required to open a door when we apply a force at a greater distance from the hinge?

I know that the magnitude of a torque increases with the distance from the axis of rotation.

What is the reason of that : how can a force exert a greater torque when the force is applied at a greater distance from the axis of rotation?

For the door, it's very similar except that the hinge end cannot move. If you apply force at the hinge, it won't rotate because all of that force will be opposed by the wall to prevent the hinge from moving, so the door won't move. As the applied force moves away from the hinge, the process I described in the above paragraph kicks in. The more of the door is on the same side of the force as the hinge, the more inertia that side produces and the slower it accelerates. Again, because the hinge can't move, it provides an opposing force. But if that side accelerates slower, then the opposing force decreases and your net force increases (that means the door becomes easier to accelerate). As you move to the other end of the door, the hinge can actually gain the desire to accelerate backwards (like I described above), so the opposing force would push back in the same direction as the applied force.

I want to clarify something in case it was confusing. If you're pushing on the same side of the centre of mass of the door as the hinge, the door wants to rotate the other way (as if the hinge was on the other side). But the hinge is fixed and the net force you apply means the centre of mass has to go in the direction you push. So the hinge provides a counter-force large enough to prevent that end from accelerating but not large enough to stop the door from moving. This makes the free end accelerate faster to compensate, thus rotation occurs.

But what it comes down to is that the further from the hinge you apply a force, the less inertia will be on the side of the force opposite the hinge and the faster it will be able to accelerate and the less opposing force the hinge has to provide to cancel the acceleration on its end. This means your forces are more effective (less opposed) when further from the fixed point.

One other way of looking at it is that the total amount of work needed for opening the door is constant. The work done by a force is the force multiplied by the path length: $W = F\cdot s$. If the force changes along the path (or is not parallel to it), this expression generalises to an integral: $$W = \int_{s1}^{s2}\vec{F}\cdot \vec{ds}$$

From this, you can see that if you apply the force over a longer path, you need less force to perform the same amount of work. This is exactly what you're doing when you're pushing the door at a point further away from the hinge. The arc your hand makes becomes larger (see image), so you don't need to apply as much force to open the door. 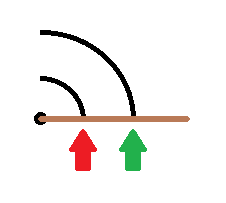 Because you have to push it further.

Not the answer you're looking for? Browse other questions tagged newtonian-mechanics forces rotational-dynamics everyday-life torque or ask your own question.

2
Why is moment dependent on the distance from the point of rotation to the force?
5
What happens inside a body when it rotates?
3
What is really the force required to open a door?
1
How is rotational torque calculated when a force is applied uniformly over a surface?
0
Off-axis torque
0
Why torque is defined to have a direction as the axis of rotation?
0
Confusion regarding torque and calculating linear/angular acceleration of an object when a force is applied a distance from its center of mass?
0
Express torque as 3d vector (calculating the applied force vector)