What does the exponential decay constant depend on?

We know the law of radioactivity:

where $\lambda$ is the exponential decay constant. My question is: This constant depends of what?

The constant is a function of the stability of the nucleus, and is experimentally determined for every isotope. In other words - every kind of nucleus has its own value of $\lambda$ and there is no way (that I know) to get an accurate value for it, other than measurement.

But there are some nuclear physicists roaming who will put me out of my misery, I'm sure...

The transition probability per unit time of a nucleus from an initial state i to a final state f, representing the decayed system, is modeled by Fermi's Golden Rule: $$\lambda=T_{i\rightarrow f} = \frac{2\pi}{\hbar}\left|\left\langle i\left|H'\right|f\right\rangle\right|^2\rho$$ Where $T_{i\rightarrow f}$ is the transition probability from state $i$ to state $f$ per unit time, $H'$ is the matrix element of the the transition operator, and $\rho$ is the state density about the final nuclear energy.

The experimental measurement of a decay constant provides a benchmark for validation of theoretical models of the physics of nucleon-nucleon interactions and nuclear energy structure. In some rare cases, the decay probabilities are so minute that the Golden Rule provides a useful a priori estimate of the decay likelihood, which can guide the design of experimental measurements of such rare decays.

Here is a table of isotopes versus lifetimes the color code of the lifetimes on the right hand column: 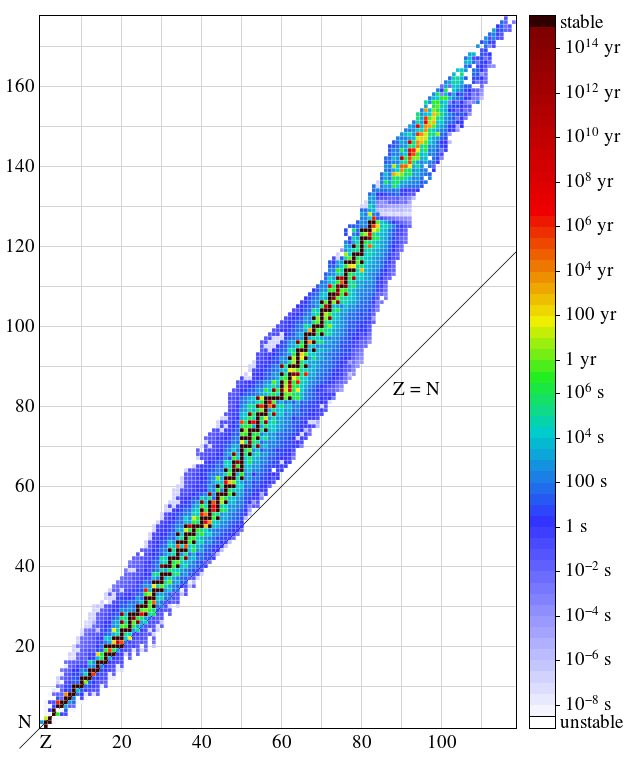 Modeling a nucleus is a many body problem and also a many forces problem. There exists the nuclear force ( strong), the weak and the electromagnetic, leading to sequential decays. As most many body problems the models have to follow the data rather than be predictive.

The nuclear force will give short lifetimes, the electromagnetic ( electron capture for example) a bit longer and the weak the longest of all, as basic inputs. BUT the particular shells of the nucleus filled, the binding energies per nucleon and the ratio of protons to neutrons will have a strong role too, modifying the intrinsic lifetimes of the underlying interactions.

The nuclear shell model allows for the possibility to use fermi's golden rule as given in the answer by user22620, but the specifics of the nuclide under study have to be taken into account, no general solution.

Here is a power point presentation for the essentials of nuclear physics for those interested further.

There are many types of nuclear decay, and many techniques for estimating half-lives.

There are many other cases, e.g., a superdeformed nucleus (shaped like an ellipsoid with a 2:1:1 axis ratio) can decay to a normally-deformed state, and one technique for estimating the decay rate would be the one used for fission, but with the tunneling going from superdeformation to normal deformation (decreasing $\beta$) rather than from normal deformation to scission (increasing $\beta$). Nuclear structure physics is not a unified, well understood field with simple methods that work in all cases. It's a hodge-podge of approximations.