It is known that the moon is moving away from Earth 2cm a year, and in doing so makes the days longer.

I want to know how many hours will have one day, when our planet is near its end.

The OP suggests the end of the planet is about 5 billion years into the future. The end is much sooner than that. The Sun will be about 10% more luminous then than it is now about a billion years in the future. That should be enough to trigger a moist greenhouse, followed soon by a runaway greenhouse. That moist greenhouse / runaway greenhouse pretty much spells the end of the lunar recession. While some of the tidal dissipation does result from the Earth tides, that is but a tiny contributor to the lunar recession rate. Almost all of the dissipation that leads to the lunar recession results from the ocean tides. Once the oceans vanish, the tidal recession of the Moon will pretty much stop in its tracks.

The above assumed a constant recession rate. While that is not a good assumption, that range of one to four centimeters per year is probably okay. The lunar recession rate has ranged from over 1.1 to under 3.9 centimeters per year over last several hundred million years. The key culprit in the variations is the shape and orientation of the continents. The current rate of 3.82 centimeters per year is anomalously high thanks to the Americas and Afro-Eurasia, which together create two huge north-south barriers to the tides. This alignment also creates for some marked resonances that increase tidal friction even more than that suggested by the barriers. At other times, the orientation and shape of the continents has impeded the flow of the tides to a much lesser extent.

Once the oceans vanish, it's only the atmosphere and solid Earth tides that can result in the Moon receding from the Earth. The atmosphere will be thicker, which will greatly magnify the atmospheric contribution to tidal recession. However, that contribution is currently extremely tiny. Greatly magnifying a tiny number results in a still tiny number. Moreover, plate tectonics will stop shortly after the oceans disappear. Mountains will disappear. Friction between the atmosphere and the Earth will be much reduced. The other factor, Earth tides, is also very small. That range of a 25.5 to 31.7 hour long day might grow a bit in the four billion years between the end of the oceans and the five billion year figure cited in the question, but not by much.

The strict answer:
By definition the day (mean solar day) has 24 hours. Ever.

The statement 'and in doing so makes the days longer' is not supported by the last 44 years or so OF official most precise satelite mesurements .

EDIT ADD:
As can be seen in this official graph the Length of Day as compared to a more constant reference (86400 atomic seconds) is shortening indicated by a downward trend.

The naive mistake we observe in the media is this: One more leap second? Then the LOD is enlarging. 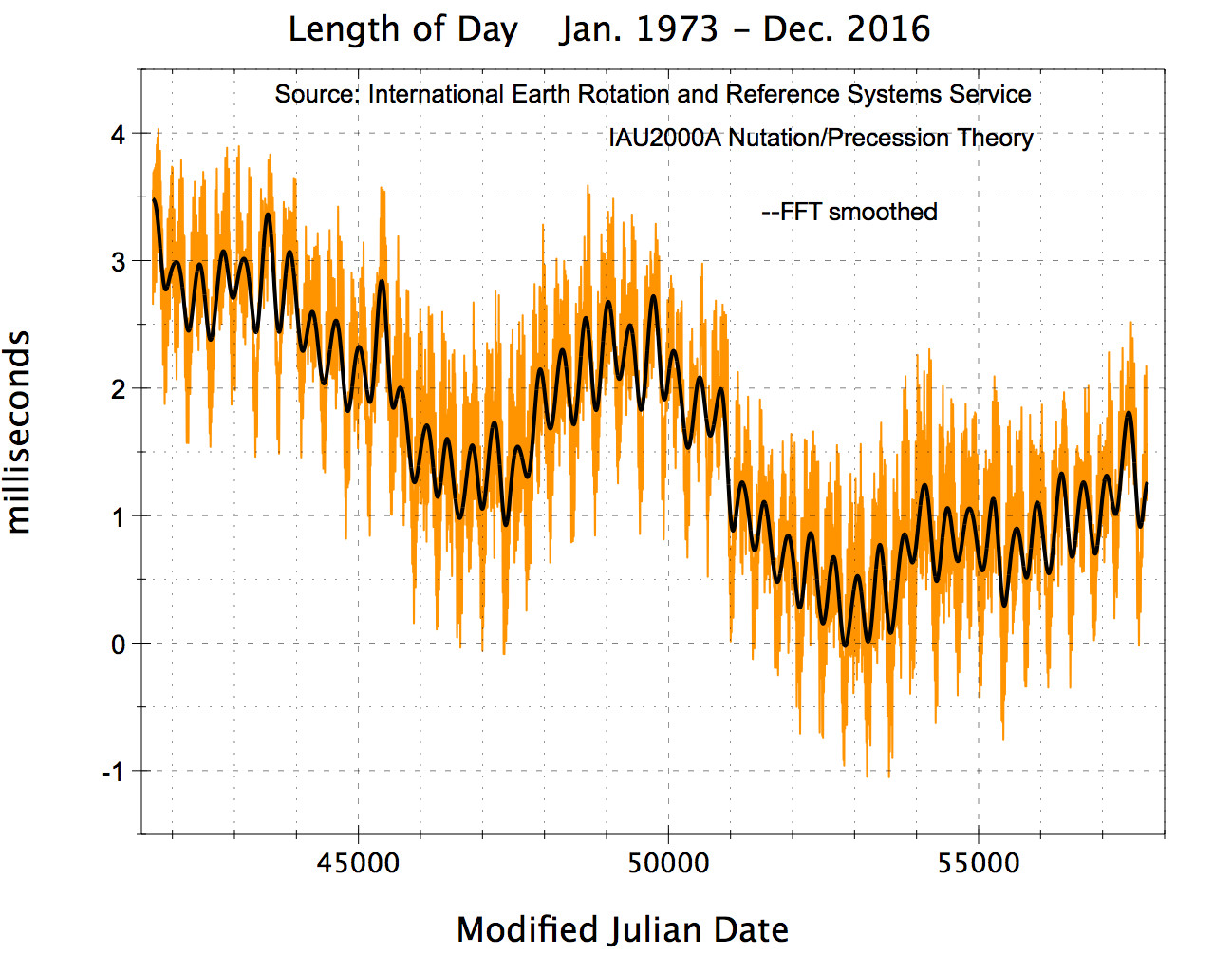 Not the answer you're looking for? Browse other questions tagged time earth solar-system moon tidal-effect or ask your own question.

1
How to distinguish between the spectrum of an atom in motion and the one of a scaled atom?

8
How long was a day at the creation of Earth?
2
True or false: the Moon was touching the Earth 1.2 billion years ago
6
How much effort would be required to fix the Earth's rotation?
0
Will climate change cause the Moon to move away from the Earth at a faster rate?
2
Will the Earth's rotation someday be synchronized with its revolution around the Sun?
4
Venusian days vs. Terrestrial days: Why the Big Difference in Length?
20
How many minutes in a year?
1
Rotation rate of Mercury vs. a day on Mercury
1
Variance of earth's rotational speed due to tidal effects