Liquid placed in a rotating cylinder

A closed vertical cylinder is filled with an incompressible liquid of mass m completely. The cylinder is now sealed from all sides and rotated about a vertical axis with uniform angular speed. Force applied by liquid on the bottom of cylinder will be:

[B] Greater than mg

Here F is the force applied by bottom of container on liquid. For equilibrium of liquid,

Now this is the solution, but I do not understand the first line itself. Why will the liquid tend to spill out? Which force is responsible for this? Even if we consider the frame of the rotating liquid, it experiences a pseudo force only in the horizontal direction, so which force is acting in the vertical direction?

It took me some time to convince myself that answer (B) is correct. Here is my reasoning:

It is not enough to say "the liquid would spill out of the top if the top wasn't there" - because the middle of the liquid is lower, and you can't decide just from that piece of information whether those two effects balance out, or whether one is bigger than the other.

Now if we had a cylinder that was a little bit taller than the liquid level, this pressure differential would result in a slope on the surface of the liquid that is a function of $r$ - specifically, the slope would be proportional to $r$ so the surface takes on the shape of a parabola (ignoring surface tension effects). See https://physics.stackexchange.com/a/88344/26969 for a derivation, or http://www.mne.psu.edu/cimbala/Learning/Fluid/Rigid_body/rigid_body.htm for a more complete analysis including pictures.

Here comes the "bit of insight" that I needed:

Now we start moving the lid down. When we first touch the water, we start to experience a force - we have to push down against the pressure of the water in order to push down the lid. As we push, the water is pushed inwards. Now in pushing on the lid, we are applying an additional external force on the liquid in the vessel - and so there must be an additional upward force by the bottom of the vessel on the liquid to keep things in equilibrium.

This diagram tries to explain it - the numbers are fictitious: 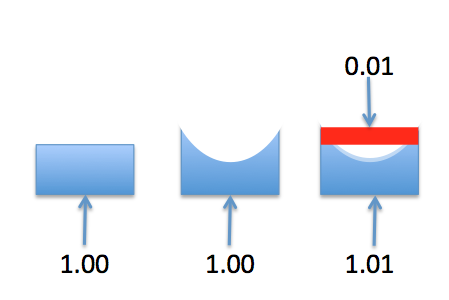 Not the answer you're looking for? Browse other questions tagged newtonian-mechanics forces fluid-dynamics or ask your own question.

12
Fluid in a rotating cylinder