I've been trying to model the orbit of a comet of arbitrary mass around our sun from having a known initial condition with $r_0, v_0$ with angle $\alpha$ at $t_0$ around our sun. 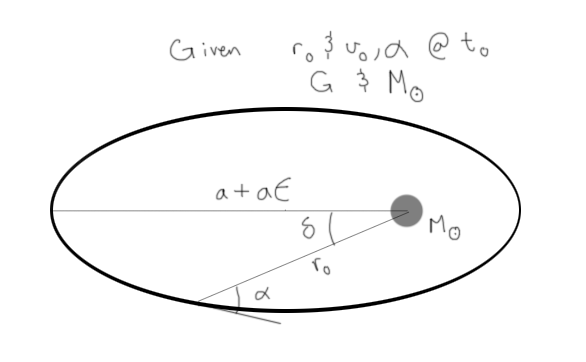 I've been able to derive the radius in the form

With c, and $\epsilon$ corresponding to their meanings in conic sections (effective radius and eccentricity).

My problem is almost done, I just wanted to know if there was a geometric relationship between $\delta$ and $\alpha$ I could exploit? There is an energetics way of solving this but a geometric method to find the tangent line as a function of angle from foci seems like something that should be solvable.

Not the answer you're looking for? Browse other questions tagged newtonian-mechanics orbital-motion visualization or ask your own question.

8
Orbital mechanics and rocketry: Is it ever a good idea to intentionally lower periapsis?
4
Satellite in Elliptical orbit
2
Plotting Ground Track of Elliptical Orbit with Inclination Angle
1
Torque and angular acceleration in elliptical orbit