Twin paradox where the twins start at different locations

Suppose we have this scenario with twins A and B:

3) At some pre agreed upon time B accelerates towards A, reaches some velocity and travels all the way to A at that velocity. Once he meets A he decelerates and enters A's reference frame

1 ) When B travels towards A, wouldn't each twin observe the other's clock moving slower? In that case when they meet and before A decelerates what would each one observe regarding the other's clock?

2) When B decelerates and enters A's reference frame would he observe A spontaneously age?

1 ) When B travels towards A, wouldn't each twin observe the other's clock moving ["running", "ticking"] slower?

No, quite the opposite:
If two participants (such as A and B) were moving towards each other (at constant mutual speed, $v := c~\beta$, $\beta > 0$)
and if one stated signal indications at constant frequency $f$ (as "ticks" of a good clock)
then the indications of the other having observed these signal "ticks" occured at larger frequency $f \sqrt{\frac{1 + \beta}{1 - \beta}}$; or in other words: quicker than the signal indications had been stated; cmp. blueshift.

In the described setup this applies to both clocks, mutually.

let's say the twins start out some distance apart, in the same reference frame.

... more precisely: the twins are initially at rest to each other, some distance apart.

3) At some pre agreed upon time B accelerates towards A, reaches some velocity and travels all the way to A at that velocity. [...] when they meet and before A decelerates what would each one observe regarding the other's clock? 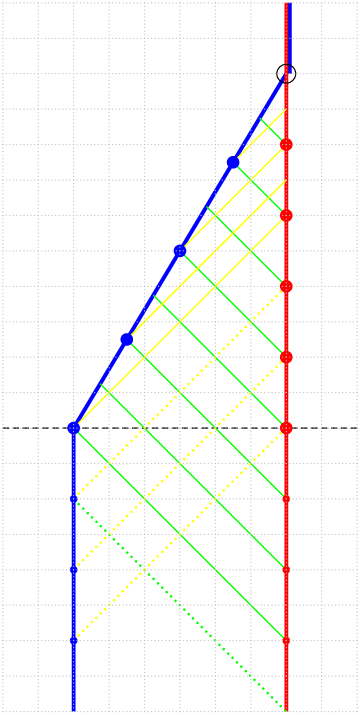 When B decelerates and enters A's reference frame would he observe A spontaneously age?

When B decelerates and has come to rest with respect to A they can again determine which indication of one has been simultaneous to any indication of the other. And both clocks would again tick at equal frequency, since both clocks were supposed to have been and to have remained good.

As far as the "deceleration phase" B, too, is of negligible duration compared to the "drift phase", they would still find the relation between their good clocks as it was observed at their meeting:
clock A is and remains $n (1 - \sqrt{ 1 - \beta^2 })$ ticks ahead of clock B.

At step 1 and 2, what that means is that A sees B's clock in a telescope at some time in the past, and calculates that it is really the showing the same time now when accounting for communications delay.

In step 3, B's clock runs slower but gets closer so the delay is less. The view through the telescope shows a clock that smoothly gets closer to A's time (but never catches up all the way)

Q1.2) (edit: original posting said it wrong) When they meet, B's clock will show earlier than A's. Each observes the other running slow. The point to remember here is proper time. The lack of symmetry (was it A or B that was moving toward the other) is a paradox in SR but explained in GR. It's the same as the parable about having clocks on the floor and ceiling of an elevator.

P.S. To check that and really follow what's going on, draw a diagram. Try posting your sketch and we'll give feedback and corrections.

I figured out how to explain the resolution. 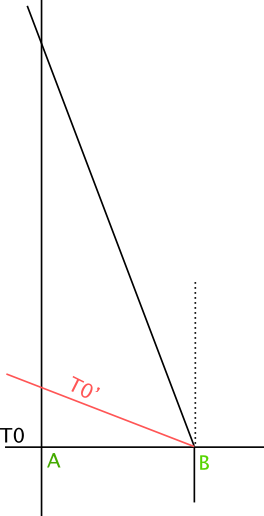 Here is a diagram of what you posed. A and B are in the same frame (both have space axis running vertically and a common time axis of T0) and decide to synchronize clocks.

Now B accelerates. Suppose the acceleration is so high that it occurs over too brief of a time to measure, and certainly doesn't show up on the scale of the drawing. The period of acceleration is t-blink, perhaps a few microseconds, but arbitrarily small. At T0 both have the same time. At T0+tblink, A still shows the time at (about) T0, and so does B.

But B is in a different reference frame now. When he combines his telemetry coming from A (the image of the clock that's just now arriving) with the relative velocity and distance, he calculates that A's clock is “now” rather later, where T0’ intersects A's track.

So B doesn't “see” A's clock jump, but determines that it jumped if the instrument is working according to the current reference frames each time it updates. The instrument labeled "A's clock now" will jump ahead. But A's clock never changed in a funny way; the thing being measured has changed.

If there were separate instruments showing "time of A in frame 1" and "time of A in frame 2" they would show different results and always did, even though B synchronized his local clock according to the left-hand instrument. It doesn't matter that B himself is in frame 1 or frame 2 or something else, as the instruments know that and always calculate the proper compensation based on telemetry and the absolute 4D interval between events on the respective frames.

So one B syncs his clock with the left display, and when he arrives the two displays show the same thing. As they get closer together, the "rise" of the red line does less.

Since the two instruments show the same thing, it doesn't do anything funny when B changes from being in one frame to the other. However, during the course of the trip, B's clock showed less elapsed time than A as measured from T0 to their common rendezvous, and more elapsed time as measured from T0′ (red line), since in that frame A started later.

So the situation is symmetric regardless of which ship “really” moved, as there's no such thing and either view is correct. The symmetry is broken by how you asked the question. You asked about the time from T0(black) on both paths. microseconds after the acceleration, you can't tell whether T0 or T0′(red) is better or more appropriate. You checked before that maneuver, so it was natural to agree on T0. But in either case, B could have synchronized his clock with the readout of the second instrument. If he had two clocks he could do both, and see that when they met one clock was less and one was greater than A's.

B should be younger than A because of the two accelerations B goes through.

Now assuming the entire process took T time in A's reference frame and T' in B's reference and the time difference due to velocity time dilation as td,

The age difference calculated by A will be

Calculated by B will be

Having a td difference in age for both of them. I am thinking it will be equal to the propagation delay between the initial positions of A and B or the difference in time in the synchronized clocks. Assuming distance to be X

Not the answer you're looking for? Browse other questions tagged general-relativity special-relativity relativity twin-paradox or ask your own question.