Rate of acceleration for two hanging masses in two experiments

I conducted an experiment where two masses of different weight were attached by a string and fed through a pulley. The difference between the masses was $0.025\: \mathrm{kg}$. The lighter mass was pulled to the the floor, causing the heavier mass to be suspended in the air. We timed how long it took for the heavy mass to reach the ground once the lighter weight was released. The average acceleration of the system was $0.883\: \mathrm{m/s^2}$.

We then performed the exact same procedure but decreased the total weight of the system. The difference between the masses was still $0.025\: \mathrm{kg}$. The average acceleration for this system was $0.922\: \mathrm{m/s^2}$.

One way to think of this conceptually is that the inertial mass of the system is in fact different from the gravitational mass. That is, while the net force on the systems are the same, the two systems have a different amount of mass, and so they resist changes in velocity to different degrees. 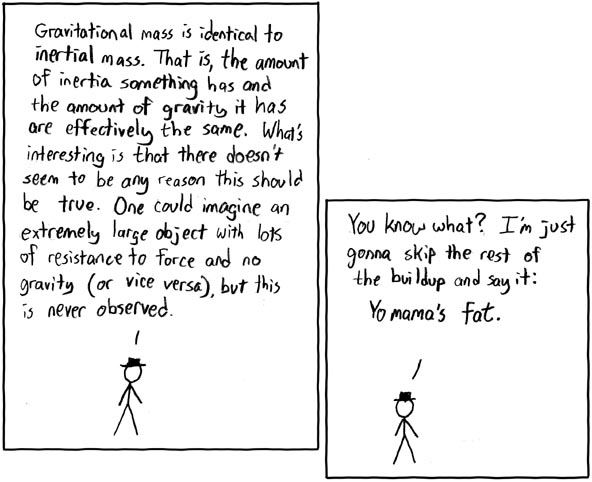 Except that in this case, we are considering a compound system, not just a single object.

So, this system has a total mass of about $\rm 0.2777\: kg$. We could also find the masses of the individual weights, since we know their sum and difference; this I leave as an exercise to the reader.

Not the answer you're looking for? Browse other questions tagged homework-and-exercises newtonian-mechanics forces newtonian-gravity acceleration or ask your own question.

5
Can a massless rope accelerate?
0
Total tension in a rope caused by two hanging masses at opposite ends?
1
Experiment to show $a \propto F$
0
About a pulley, a rope, four masses and two springs: solvable or not?
1
How is energy conserved in an elastic collision between two unequal masses?
0
Why other forces contribute to tension in a system where there are 2 different masses hanging from a pulley?
0
What will be the direction in which these masses accelerate and move?
1
Will the lighter mass instantly come to rest?