Calculating rate of vaporization of water

Let there be a cylindrical vessel with diameter $D$ that only has liquid water and water vapor as the picture below shows (The water vapor is the grey portion and the liquid water is the blue portion). All contents of the cylinder are at temperature $T$. The water vapor is at pressure $P$. The contents of the container are heated using a burner. The power delivered from the burner to the cylinder is $\dot Q$. As a result, I believe that some of the water will evaporate.

If $m_v$ is the total mass of the water vapor in the container, then I believe that $m_v$ will be a function of the diameter $D$, $h$, $P$, $T$, and $\dot Q$. I don't know what this function is. I would be really glad if someone could give it to me or give me a reference. 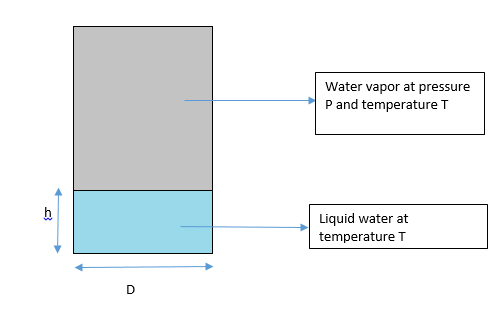 Are you studying basic thermodynamics? Because your question is exactly what people learn in the first few classes of this subject.

First Law of Thermodynamics tells us that every joule of energy from the burner will act to increase the system's internal energy.note 1 Also, the total volume of your system is constant (isochoric process). We need only to use the fact that the state of a pure, simple substance is uniquely determined by two independent parameters in order to predict the behavior of your system.

What we want to find is the parameter named quality (symbol $x$), which is the mass of vapor divided by total mass. As with any other parameter, it can be expressed as a function of two others (so $x=x(U,V)$. Once we have it, we find the mass of vapor by: $$m_v=m\cdot x(U,V)$$

where $m$ is the total mass of water.

There's only one problem: finding an explicit formula for $x(U,V)$. Some exist, but finding them is not straightforward. However, there are many tables and graphs readily available on the internet, and you can find solutions for individuals points $(U,V)$ with them. Below I'll show you how to do it with a water table, but first check out these graphs. They give you an idea of how your process evolves with time. 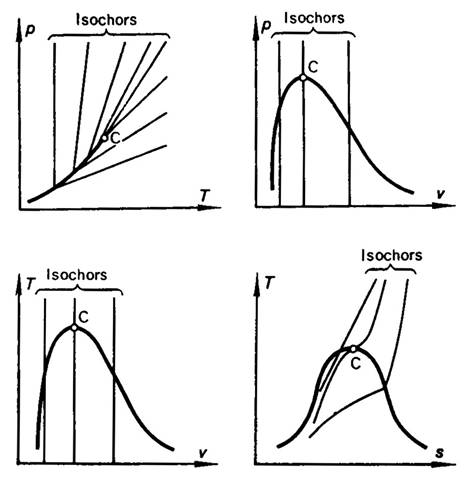 ¹ if your system was under constant pressure, we should use the enthalpy of vaporization, but since the cylinder is constant-volume, the correct one is indeed the energy of vaporization. All this comes from the First Law: $Q=\Delta U+W$

Example: finding how much water evaporated after $t$ seconds

Suppose it's a 1 m³ cylinder with 1 kg of water inside, receiving 2 kW from a burner. Initially, it's at 20 °C. We want to know how much water vaporized after 5 minutes.

We are going to use this table as our model of the behavior of water.note 2

I measured evaporation in an open container to be about 0.6 grams per hour. Room temperature average about 72 degrees. Surface diameter of water is about 6 inches.

Regarding the volume of liquid and vapor, as the liquid expands in a closed container, it takes up more volume than it originally did, so the "liquid" space expands while the "vapor" space contracts. I don't know if an analytic solution exists for this process, but a numeric simulation, and a resulting curve fit, yielded the following for liquid and vapor volumes:

The equilibrium vapor pressure $P$ of liquid water at a temperature $T$ can be accurately estimated using the Tetens equation:

The amount of water vapor is given by the ideal gas law $PV = nRT$ once it has been rearranged to $n = PV/RT$. Use the heat capacity of the water along with the amount of heat input $\dot Q$ to the system by the burner to figure out the final temperature $T$ of the water after heating. Once you have the final temperature of the water $T$, the volume of the container $V$, and the vapor pressure $P$ (from the equation above) the problem becomes a plug-and-chug. If using $R= 0.082 \frac{L\ atm}{mol\ K}$ then to convert moles water vapor to mass water vapor all you need to do is multiply by the molar mass.

Not the answer you're looking for? Browse other questions tagged thermodynamics evaporation or ask your own question.

0
Do different ways of vaporizing water have different efficiencies?

3
The thermodynamics of heating water in a rigid container
0
Confusion about the Definition of Boiling Point
0
Dependence of relative humidity on temperature and pressure
0
Why liquids evaporate completely when heated at their boiling points?
0
Determining final conditions of boiling water in closed system
1
Finding the equilibrium vapor pressure of two solutions(of different concentrations) enclosed in a vessel
0
Kinetic energy of evaporated gas as source of energy loss for evaporating liquid?