Why do you have less control over a bicycle with a broader steer?

I recently had an argument with someone on why a bicycle with a broader steer gives you more control. We both had different answers to this question and neither could convince the other.

First a schematic drawing of the situation: 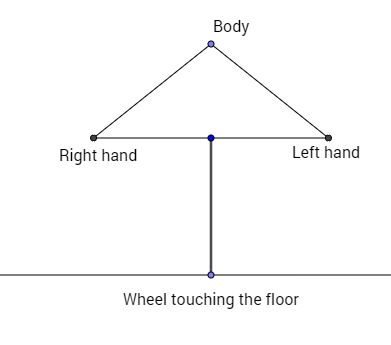 Both claims assume that the only force on Body is gravity, denoted $F_g(Body)$. This force is carried on through the bicycle to where the wheel touches the floor. The bicycle is assumed to have no mass.

My question now is: "Why do you have less control over you bicycle when the steer is broader. I would like to know the correct physical explanation and what is wrong with the claims (or perhaps somethings wrong with our assumptions)."

N.B. I am not a physicist myself (I'm a mathematician), so forgive if I made some obvious mistakes.

The mechanics of steering a bicycle are more complicated than you think - as evidenced by the fact that it's quite easy to ride a bike without touching the handlebars, for example.

The key to the stability of a bicycle is the angle of the fork - both the angle of the main pivot, and the offset of the wheel with respect to that pivot - and the point where that line meets the road (green dashed line in the below): 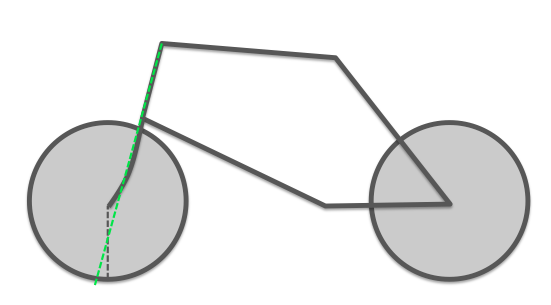 When the bike starts to "fall over", the wheel will start to turn because the green line intersects the road in front of the point of support of the wheel. And when the dashed line is in front of the wheel, it will turn the wheel in the right direction to "counter the lean" - in other words, it is a stable situation. If the fork is bent so the green line ends up behind the support, the bike becomes impossible to control.

Now assuming that the fork is correctly sized and aligned for the bike, the question becomes "what is the role of the handlebars?". These allow you to either amplify, or counter, the force that the wheel is exerting by itself. Wider handlebars do three things:

I think that points (1) and (2) in particular will give you the sense that you have less control over the bike, although (3) could, in experienced hands, provide the opposite sensation. But by FAR the most important factor in the control of your bike is the correct alignment of the fork.

Its easy...when you get used to riding a bike with one steer, you get used to the fact that same movement of your arms turn the steer in the same angle. But, if you make the steer shorter, that same movement will turn the wheel more, and you will be somewhat out of control, because your instincts are now a bit off...its all about the difference between angle and displacement, if you are close to the point, origin of the angle, you need less displacement, and if you are far from this point, you need more displacement. FOR THE SAME ANGLE, of course.

I think that wider steer actually increases your control over the bike.

From bicycle design point: the steer widths are different on different types of bikes. Bikes designed for paved roads only have the narrowest steers. Logic suggests that riders want better control on more rough terrain. There are even bike bar ends that can further increase the distance between your hands.

You can make an experiment: have one person grip at handlebars and another person grip somewhere in between, then have them try to turn the wheel in the opposite direction. Given the same physique the wider grip should win. Isn't that better control?

Another factor that can also contribute to the self-stability of traditional bike models is the distribution of the mass in the steering mechanism, which includes the front wheel, the fork and the handlebars. If the center of mass of the steering mechanism is in front of the steering axis, then the force of gravity will also cause the front wheel to move in the direction of inclination. This can be seen by leaning a stationary bike to one side. The front wheel generally moves on that side regardless of any interaction with the ground. Additional parameters such as the center-of-mass front-to-back position and the center of mass elevation also contribute to the dynamic behavior of a bike.

4
How do I turn my bicycle?

0
How can the torque a bicycle experiences be calculated based on the center of gravity, weight and a force?
1
Question about a car on a banked turn with no friction
0
Horizontal and vertical acceleration of a ball on a slope?
2
The dynamics of a cornering wheel
0
Reaction forces acting on a ladder against a wall
0
What are the vector forces that cause a high side accident?
1
Newton's third law (action and reaction) and work done with a wheel