Why does my measured I-V curve for a film of aluminum suggest high resistance?

I plotted the I-V curve between two points (few microns apart) on a thin aluminum film.

I expected this metal to be a conductor and have a much lower resistance, but the slope suggests that it is actually about 4Ω. Does this make sense? Is this an equipment limitation?

Here is the plot. The equipment is limited to 0.1A current. 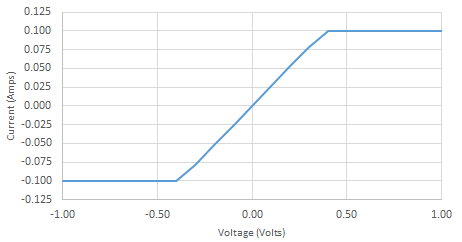 This isn't really an answer, because your question doesn't provide enough information for an answer. However it explains what you need to do. In fact this is exactly what I did (back in 1983!) to measure the resistivity of evaporated silver films.

If you have the film formed on some substrate you need to score two lines to leave a long narrow track like this:

In the diagram I've exaggerated the width of the track. The width $t$ needs to be much smaller than the length $d$ so the track approximates a thin wire.

Once you have the resistance per unit length, $R/\ell$ the resistivity is given by:

where $t$ is the track width and $h$ is the film thickness.

Now you can compare your measured resistivity with the resistivity of bulk aluminium. Films of around a micron or greater thickness should have a resitivity similar to the bulk metal. However thinner films will have a higher resistivity because they are not continuous but contain voids.

For evaporated silver films I found the resisitivity only deviated significantly from the bulk value below around 50nm, but this will depend on how much they anneal after striking the surface.

Another possibility is that you are having to break through the oxide film that all Aluminium has in air. The voltage needed to do that can vary considerably. You might need to use sharp steel electrodes that will punch through the oxide and contact the metal directly.

Actually, I am not sure you should expect a much lower resistance value. For example, with aluminum resistivity of 2.65x10^(-8) Ohm-m, a sample with length of 5 micron and cross-section area of 100 nm x 1 micron has a resistance of about 1.3 Ohm. Of course, you can question the rather arbitrary effective width of the sample - 1 micron, but I guess this effective width depends on the dimensions of your electrodes, and I don't know them. Let me just note that, as far as I remember, for very small electrodes, the resistance between two points of an infinitely wide and long film can be extremely high (infinite, if you have point-like electrodes).

I'd also like to note that Dirk Bruere's answer can be relevant. A few months ago, I tried to measure the resistance of a thin (1.6 mm) and long (1 m) rod made of doped silicon. The measured resistance was infinite until I chucked the ends of the rods in collets, thus "breaking" the oxide film on the surface of the rods (the resistance was about 5 kOhm).

Not the answer you're looking for? Browse other questions tagged electric-current electrical-resistance voltage conductors or ask your own question.

1
Relationship between thickness and resistivity of thin metal films, finding the characteristic thickness and the cut off resistivity
1
What exactly is potential difference? What are the factors that effect it?
0
If we put a voltage on a big square piece of aluminum sheet how will the distribution of the current look like?
4
How can current pass through (resistance less) connecting wires?
1
Would a metal chair suspended in air be hit by lightning or not?
0
Differential resistance vs. $R = \frac{U}{I}$
0
Why does more voltage mean more current?
24
Speed of electrons in a current-carrying metallic wire: does it even make sense?
2
How does resistance *really* work? (DC, battery, LED, atoms, electrons)
23
In aluminum, how does electricity travel through the surface oxide layer?