Why is angular velocity of any point about any other point of a rigid body always the same?

I have the following question regarding an ideal rigid body.

Firstly, is it always true without any exceptions that the angular velocity of any point about any other point on a rigid body is always the same?

If so, what happens in case of precession, in which two different angular velocities are predefined?

Think of rotation as a manifestation of a change in coordinate direction. Affix a coordinate system at any point on a rigid body and it is going to change direction at the same rate regardless of the point location (even at the rotation axis). This is why angular velocity is shared among the entire rigid body.

Note also that the general motion of a rigid body is a rotation about some axis in 3D, coupled with a parallel translation along the same axis. The rotation and translation defines a screw in 3D and given the linear and angular velocities of any point on the rigid body, the properties of the motion can be derived.

In summary, a single rotation speed, and a linear velocity vector at some point is enough to describe the instantaneous motion of a rigid body both geometrically (rotation line in 3D, pitch and magnitude) and analytically (rigid body transformation of velocity to any other point).

I think when a rigid body rotating about any point , the point of rotation remains fixed and all other points of the rigid body always rotate about that fixed point with same angular velocity. 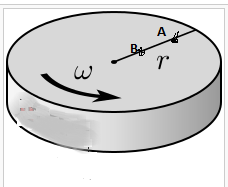 Let us suppose a disk rotating about its center with a angular velocity $\omega$ and $r$ is the radius. Now the angular velocity at point A and B must be same. If the velocity are not same then there would be a relative motion between the points A and B of the rigid body which gives rise a Shearing strain due to a tangential stress which appears due the relative motion between A and B. Hence shape of the rigid body would be changed.

Not the answer you're looking for? Browse other questions tagged classical-mechanics rotational-kinematics angular-velocity or ask your own question.