Does space between objects contract?

I had a question, let us assume a coordinate system where there is 2 objects moving at relativistic speeds (at same velocity) for the observer therefore the observer will observe the length contraction being by Lorentz factor $L' = L\sqrt{1-\frac{v^2}{c^2}}$ from the direction of the motion, for this let us assume the objects are moving along an $X$ axis only, now since this completely makes sense and has no valid consequence I can think of, I can begin my logical intuitiveness to ask, the observer will see the distance between 2 objects increase as the object behind the first object will contract. I have illustrated an
basic picture to explain this ever more clearly for those who do not understand my writing: 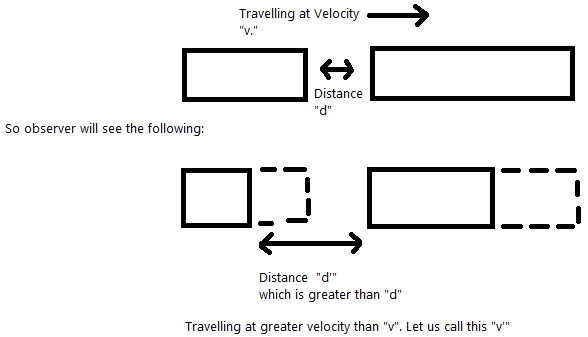 On other hand even though the observer from the frame of reference of the moving rocket will see the moving object as stationary as they are moving the same velocity so will not see any difference in distance apart from the object even though the observer outside may see the distance increase super-exponentially. This distance surely would take light much longer to cover as the velocity increases as there is no contraction of space between them. Now, the question is even though the observer inside the object will measure no difference in distance among them, he will measure an "slower" speed of light. This surely cannot be true as Special Relativity dictates the $c$ is measured the same regardless of any frame of reference. This is an paradoxical situation but there must be an effect I am not considering that may resolve this apparent "paradox".

Next, I did few research upon this matter and have read the perhaps one of the most notable paradoxes pertaining to Lenght Contraction & Relativistic stress called Bell's spaceship paradox. I have learnt among other things that the distance may not undergo Lorentz contraction.

Perhaps, if space does not undergo Lorentz contraction, then few of the laws of Special Relativity may become invalid so I am very tempted to suggest space also get contracted between these 2 objects, but if space does undergo contraction, this raises an other question.

If space between them does contract, then the light would remain the same which save Special Relativity but also creates a situation in which time would seem equal just as it is in an stationary frame of reference.

For a start, we need to remember that local distance does not change for a person moving along with the object. Such a person (riding one of your objects) would not see any of the objects change length, but also - and which is important here - he would not see the gap between the objects become shorter or larger. Special Relativity states that a person moving at $v$ with respect to any other object can always claim that it is not moving, and that it is the other frame of reference that is moving. So such a person cannot observe any changes in lengths or distances of local objects (moving along with him), whether he is moving wrt. to another object or not.

Now, what Lorentz transform for length really tells us is that the distance between any two points moving at certain $v$ will contract (by exactly the same proportion) as seen by outside observer. See the derivation at Wikipedia.

Back to your question, in the first picture of yours we have both bodies moving.

But what if it was just one long body - the gap "d" being a part of it?

Would we say that the whole length of the object (being the sum of the two smaller objects and the gap "d") is contracted? Sure we would. But the distance from one far end to the other far end of the whole is the same, whether there is only one object or two of them. Therefore, it doesn't matter if there is a gap or not, the "passenger" moving with the objects must see the total distance the same. Also - and more importantly - an outside observer must see total length the same (although shorter comparing to what the "passenger" sees).

To show it differently. Let's imagine a person riding one of these objects suddenly pulls out a stick (green) that connects the two objects.

Would the outside observer see the two objects as connected (by the stick) also? Sure he would. Would he see the stick contracted (as compared to the length of the stick as seen by the person moving with the object)? Sure he would. Would he see the distance between the objects suddenly change after the stick is pulled out? No, he can't see any such thing happen. No SR equation would allow for a sudden movement like this. So the stick cannot make the two objects move wrt. each other as seen from any frame of reference - be it stationary or the moving one.

The conclusion is that according to SR space between moving objects must be observed as contracted also.

I don't think it's good to consider length contraction a law of special relativity. The law of special relativity is that light is measured the same for all inertial observers, or that the interval $(ct)^2-x^2$ is conserved from reference frame to reference frame. That's THE law. Length contraction, on the other hand, is a special case deduced when you look at the width of a region $x_0\le x\le x_0+L$ after a change in reference frame (visualize the region in a minkowski diagram!)

Part of the reason is that you might be unclear on your assumptions. Let's suppose you start with two stationary rockets a distance $d$ apart, and then you accelerate yourself to some fraction of $c$. As you approach $c$, you will see the two rockets flatten into a disk - you do indeed get length contraction. The distance in your frame of reference is smaller.

If, on the other hand, the two spaceships accelerate separately and independently and you stand still, it is as you say, and the distance (as observed in your stationary frame) increases to some limit. This situation is much harder to analyze because it involves accelerating the rockets. You can only analyze it in the frame of the rockets once you've stopped the acceleration - otherwise you have to stick to your stationary frame.

Actually, I was just thinking about an extreme case where you can see that length contraction isn't a "law" of relativity in a google+ post by John Baez. Each event undergoes a Lorentz transformation, but no two events end up getting infinitely close together. Of course length contraction IS a consequence of special relativity, I just mean that it's more nuanced than "space squishes down", whereas Lorentz transformations/invariant intervals have no such nuances.

Not the answer you're looking for? Browse other questions tagged special-relativity reference-frames time-dilation length-contraction or ask your own question.

50
How long would it take me to travel to a distant star?
8
Help understanding Bell's spaceship paradox