Does anyone know where I can find the Isospin values for light nuclei (H, C,N, O, S, Cl, ..) in their ground state?

The best place to look is the Evaluated Nuclear Structure Data File, hosted by the National Nuclear Data Center at Brookhaven National Lab. For example, the data file for helium-4, 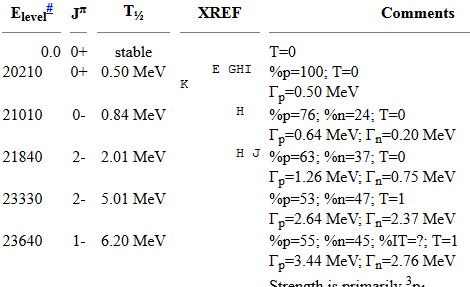 shows that the first two states with isospin $T\neq 0$ are the negative-parity states centered at 23.3 and 23.6 MeV.

Be warned that at modest proton number $Z$ the assumption underlying isospin symmetry, namely that protons and neutrons can be treated symmetrically inside the nucleus, starts to break down and it may no longer be possible to assign a definite isospin to a state. For example neon-20, an "alpha-cluster" nucleus, is assigned a $T=0$ ground state, but neon-21 has isospin assignments only for some excited states and neon-22 seems to have no isospin-assigned states at all. The next alpha-cluster nucleus, magnesium-24, has no isospin assignment in the ground state and several excited states labeled "T=0 and 1". You can compare this to the orbital angular momentum mixing that makes the ground states for deuterium and helium-4 into complicated mixtures of $S$ and $D$ waves.

1
Spin, isospin, parity etc. in nuclear physics
1
Why is isospin so useful?
0
Isospin of pions
2
Are all nuclei of a given isotope of a given element necessarily identical?
1
Can the decay rate of nuclear decay be proportional to the second/third exponent of number of nuclei?
0
Nuclei violating B number
0
Question about calculating isospin couplings