Momentum conservation in an electromagnetic system?

Suppose that I have two charged particles in the configuration below. 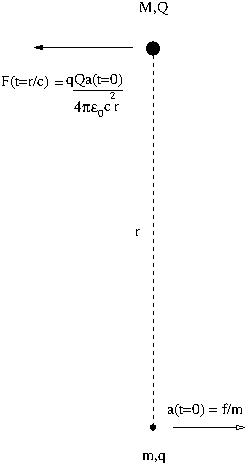 Let us assume the following:

Under these conditions the Lienard-Wiechert retarded electric field due to the bottom particle, accelerating at time $t=0$, produces a force $F$ on the top particle, at a later time $t=r/c$, given by:

Let us say that in a time interval $\Delta t$ the top particle gains a momentum $F\Delta t$ towards the left.

My question is the following: How is this momentum change balanced?

The conventional answer is to say that the EM field gains an opposite momentum to the right.

In summary I can see how the electric field in the vicinity of the top particle can transfer momentum to it but I can't see any mechanism whereby the top particle transfers momentum back to the field if we are free to make the assumption that it is so heavy that it can absorb the momentum without changing its motion appreciably.

P.S. My hypothesis is that a balancing momentum $F\Delta t$ to the right is transmitted backwards in time from the top particle at time $t=r/c$ to the bottom particle at time $t=0$ using an advanced electromagnetic interaction. This momentum then has the effect of reducing the effective mass of the bottom particle (less external force has to be supplied to produce a given acceleration $a$).

Secondly (and more importantly), is that if you are applying a constant force $f$ to this system, then you should be increasing the momentum of this system. Of course, if you were to include in your system that which is producing $f$, then the total momentum would be conserved, but as you are not, you should expect the momentum of the system (these two particles and their E&M field) to be increasing over time in the direction of $f$.

Not the answer you're looking for? Browse other questions tagged electromagnetism momentum conservation-laws classical-electrodynamics or ask your own question.