What prevents this rotational perpetuum mobile from working? [closed]

As a newbie in physics I imagine this device and I would like to know why it can't increase its energy.

Note I study the sum of energy during one second (or less) after set friction ON.

I imagine 7 gears in rotation around blue axis in clockwise. Each gear has a mass $m$. In the same time, gears are turning at $w2$ around themselves. One clockwise next one counterclockwise like gears. But like I have 7 gears (odd number), 2 gears rotate in the same direction (2 red gears at bottom). I know 2 red gears at bottom can't turn like gears but I don't want gears but friction, it's possible to imagine a part of gear with rough surface only and study the device during a little while. So, between these gears I would like only friction. This friction give heating and forces $F1$ and $F2$, others gears give forces too, $F3$, $F4$ etc. I try to draw all forces but maybe I'm wrong.

G1 can have mass or not

To draw forces, I'm starting from forces F1 and F2 and after I draw forces at right and at left in the same time, until I arrive at G1 (I'm not sure). 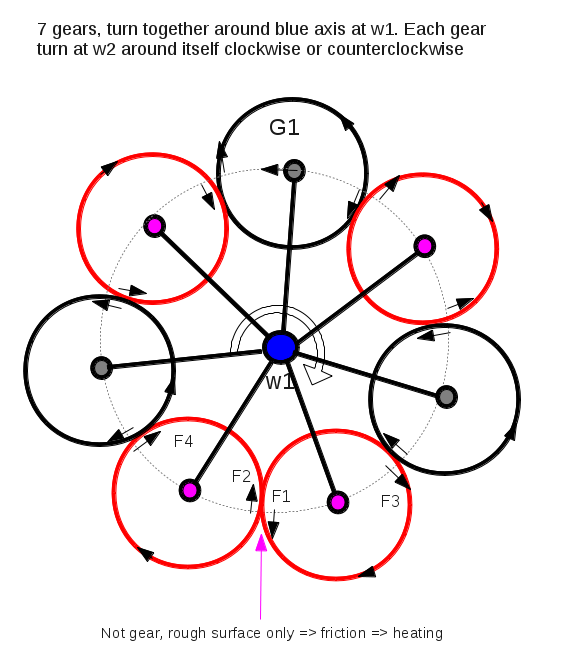 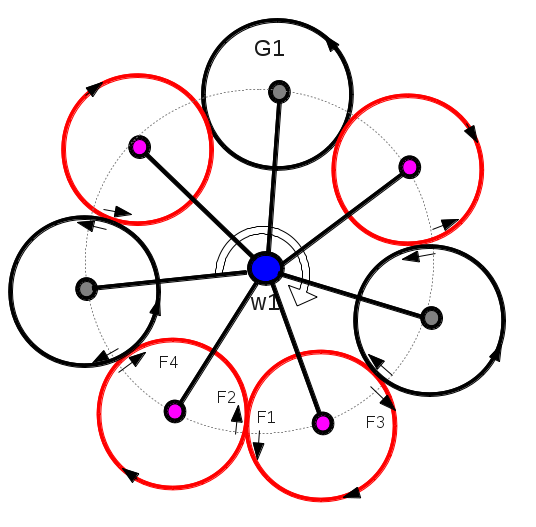 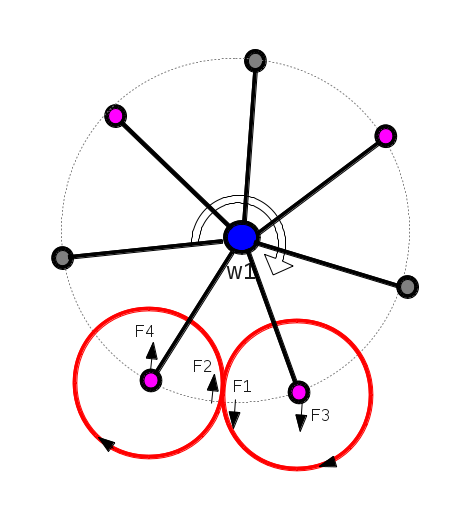 How $E$ could be constant?

I need to press 2 red gears at bottom for have friction, but I don't drawn these forces.

I guess no friction elsewhere than red/red gears surface.

I don't believe in perpetuum mobile but I imagine devices, and like puzzles to resolve, I try to understand how the sum of energy is conserved, like that I learn physics in the same time. It's like a game for me.

Even if you assume that there are no loses by friction, $\omega_1$ will slow down by conservation of angular momentum. So the total kinetic Energy will diminish. In terms of forces, the orbital angular speed ($\omega_1$) will slow down because, even if there is no net external torque, there are internal forces and torques. To see this, look at the black disk at the top. Both friction forces will have a horizontal component to the left, so as each disks increases $\omega_2$ clockwise, it feels a force/torque opposite to the direction of $\omega_1$.

Third case: In this case the internal torques actually speed up $\omega_1$ until the equilibrium situation is reached (so all $\omega$s are the same, there is no relative motion between the red gears, and they rotate with the same point always facing the blue revolution center). Angular momentum is still conserved and Energy is constant. The energy lost by the two disks ($\omega_2$ becomes zero), compensates exactly the increase in $\omega_1$ plus the heat dissipated).

Not the answer you're looking for? Browse other questions tagged homework-and-exercises energy-conservation rotational-dynamics perpetual-motion or ask your own question.

26
What prevents this magnetic perpetuum mobile from working?
1
How does ground interact with a box rotating around its corner?
5
Sum of energy for 2 solids in rotation
5
I need help figuring out what is wrong in this aspiring perpetuum mobile
1
What's wrong with this idea for recover energy from pressure?
0
Calculating acceleration, etc. of a gear train with multiple driven gears