The direction of frictional force in smooth rolling motion

I want to ask about the direction of frictional force in smooth rolling motion which means the rolling object doesn't slide on the surface.

Here is the first case, the wheel rolls to the right so the rotation is clockwise. At the point P, velocity is zero. To make the wheel rolls faster, it bottom must rotate to the left faster and the frictional force direct to the right to oppose its tendency to slide as to keep v=0

However, in this case it's also smooth rolling motion but the direction is different. It is explained in the book that if the object slide, it will slide down the ramp so the frictional force must be up to the ramp 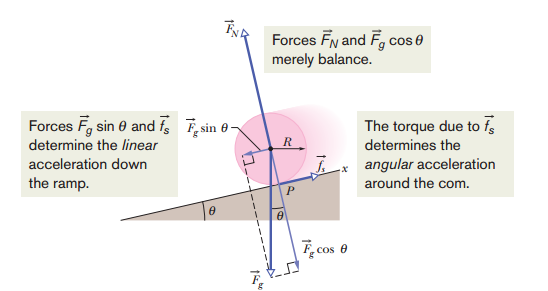 So, in the first case the frictional force have the same direction with the acceleration of the center of mass but it's not in the latter one. Can someone explain the difference between those 2.

Also, in both cases above, considering accelerating object but not considering object which move very fast. If the object is rolling very fast at a direction, to which direction will the frictional force be?

For First Case: the rotation produced by the torque at the centre of wheel will rotate the wheel in the clockwise direction, but here friction is present, as friction opposes the motion of particle that's why it acts in anticlockwise direction and helps the body to move.

For Second Case: here $mg\sin\theta$ will act along the line of centre of mass, which would simply make the sphere to slide down (because $mg$ itself is denoted as weight of the body, and this weight acts in the downward direction from the centre of mass of the body, so its component i.e, $mg\sin\theta$ will not be able to provide the torque on the sphere, because it will also act along the line of C.O.M), as we already know that friction opposes the motion of object it acts in opposite direction of motion of the sphere and provides the necessary torque, thus helping in the rolling of sphere down the ramp.

So, in the first case the frictional force have the same direction with the acceleration of the center of mass but it's not in the latter one. Can someone explain the difference between those 2.

In your first case, you say "to make the wheel roll faster", but you don't say how this is done. Is is pushed? Do you apply a torque to the axle?

If you are assuming that a torque is applied to the axle, then that is the difference between the two.

Can you explain the difference between being pushed and having a torque applying to?

When we instead have a normal floor and the wheel rolls, then friction slows down the first wheel and speeds up the second wheel. Therefore the frictional force must act in opposite directions.

Consider the sum of all external torques; calculated about the Center of Mass of the rolling body; then the angular acceleration tells you the direction of relative slipping w.r.t. contact surface. Now, the frictional force will act opposite to the relative slipping tendency.

1
Why doesn't static friction point down the incline on a ball rolling down an incline?
10
Does rolling friction increase speed of a wheel?
5
Does friction oppose rotational or translational motion?
4
Direction of frictional forces on front and back wheels
2
What is the direction of the frictional force acting on a rolling wheel?
1
Friction force in rolling motion