What is the entropy of a pure state?

Well, zero of course. Because

But... all quantum states are really pure states right? A mixed state just describes our ignorance about a particular system. So how can properties like entropy and temperature come out of ignorance of information? That doesn't make sense to me.

I think it is a mistake, in this case, to think of entropy as "a description of our ignorance." Rather, I would suggest that you think of entropy as a well-defined, objective property provided that you specify which degrees of freedom in the universe are inside and outside of your system. The content of this statement isn't really different, but it emphasizes that entropy is an objective property and not observer-dependent.

If your included list is "everything" (or at least everything that has ever interacted together in the history of your system), then what you said is true: if you started out with a pure state it will always remain so, and there isn't much thermodynamics to speak of.

The basic question of thermodynamics (and, more broadly, statistical mechanics) is what happens in any other case - most typically, the case in which the degrees of freedom you specify are continuously coupled to an open system in some way. Somewhat amazingly, there is a general answer to this question for many such arrangements.

More concretely, in classical thermodynamics one of the important things about entropy and temperature is that they tell you how much work you can extract of a system. So one way to reform your question is: "How can properties like maximum work extracted come out of ignorance of information?" But it is easy to think of situations when this is the case. As a toy model, imagine a sailor trying to navigate a sailboat in some storm, with the wind changing wildly and rapidly. If he somehow knows beforehand exactly when and how the wind will shift, he will have a much easier time moving in the direction he wants.

Ultimately, a similar game is being played on a microscopic level when one speaks, for example, of the maximum efficiency possible in a heat engine. The explicit connection is made by Landauer's Principle, which is the direct link you're looking for between the included degrees of freedom (or, if you insist, "knowledge") and work. This law was inspired by the famous thought experiment Maxwell's Demon, which is a microscopic equivalent to my weather-predicting sailor.

There is a difference between the 'fine grained' and the 'coarse grained' entropy. If we start with a pure state (zero entropy), and we time-evolve it, the entropy indeed stays zero by unitary of time evolution. The fine grained entropy did not change.

The issue is that when a wavefunction collapses it has an inherent randomness to it. Since entropy is fundamentally related to information, I'll start with information to explain why this is significant.

If you think of the information of a state as what is needed to completely define a system something interesting happens. This is best illustrated by taking a picture and trying to compress it. Let's take this image: 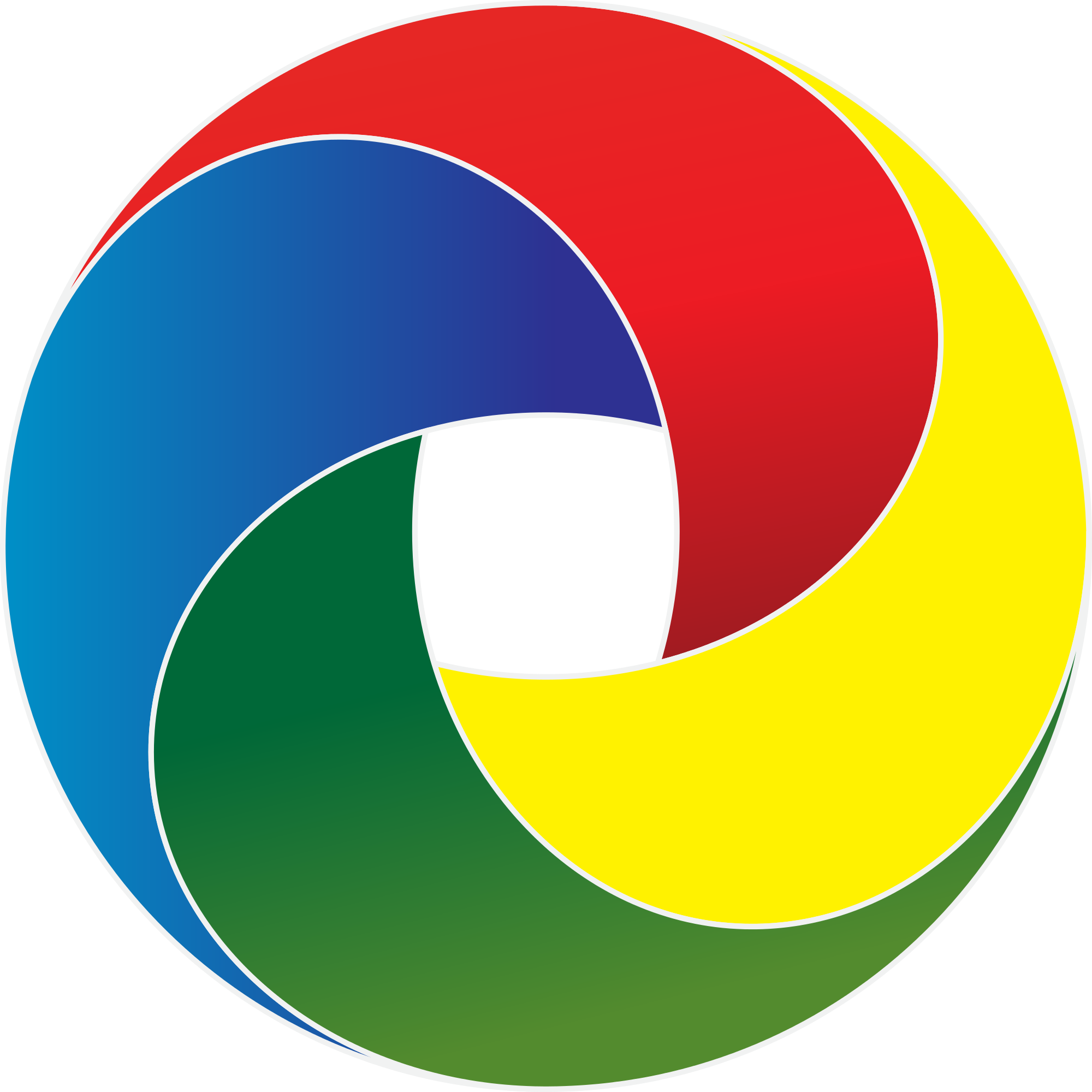 You can think about the information necessary for us to completely define a system as being the total amount of details we need to describe the system. For this image, you CAN represent it as a collection of 2000 x 2000 pixels which each require 32 bits of information (RGB+Alpha), or $\ 128$ $10^8$ bits of data.

Since this image was actually originally an svg, it turns out if we keep on getting smarter and smarter how we compress this we could actually reduce the image down to basically 2 shapes (white outline and the petal shape), 1 radius and 4 angles about the center to position each shape, 4 base colors (5th for the white), an equation for the gradient color change, and an equation for the shadow effect.

It turns out this system actually only has very little information. The amazing part is that this is the case only because the image we are looking at isn't very random. It can be represented with few bits of information due to it's uniformity. We were able to fully reduce all the redundant data because it was essentially not random.

It turns out that for an image like this: 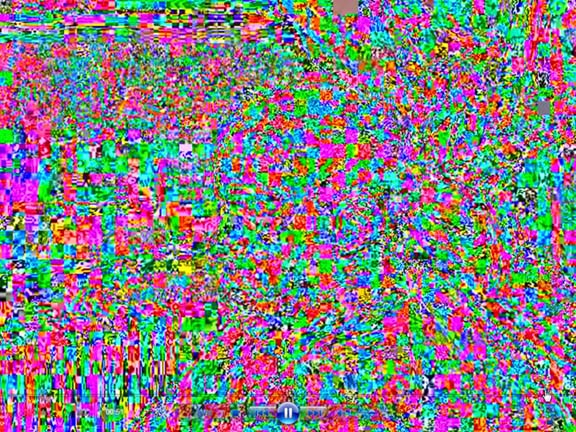 It would take far more information to fully describe since it is essentially random all throughout. We are not able to really do any compression because we almost all the information we have is not redundant. The information of a system that has $n_i$ many states that require $\sigma_i$ bits of information (e.g: colors, equation of shape) to be described boils down to something approximately like

What in the world does this have to do with quantum mechanics and the entropy of a quantum system?

QM is a probabilistic theory at it's core. When a wave function collapses it does so randomly, so completely describing the system after a collapse of a wavefunction takes more and more exact information if you want an exact model of what's happening. This increasing randomness turns out to be the Law of Entropy in action. As systems interact random quantum effects increasingly perturb the system. If you want you can say that it comes out of "hidden variables" but many physicists have worked to disprove the orthodox viewpoint of "hidden variables" (to great success might I add). A collapsing wave function is inherently random, so it introduces randomness as the clock keeps ticking on.

Related Media: What is NOT Random

But... all quantum states are really pure states right?

There exists the density matrix formulation for the many body system quantum mechanically. What happens in a many body problem, order of 10^23 molecules per mole that are the appropriate numbers for a thermodynamic formulation, is that the off diagonal elements are so small that they are effectively zero and the many body system has lost the quantum mechanical correlations. The ensemble is not in a pure state as far as our measurement accuracies go.

A mixed state just describes our ignorance about a particular system.

Also our inability to measure the quantum mechanical correlations due to their infinitesimal size. Note that in certain conditions, superconductivity for example, the correlations exist strongly and pure states persists even in the large number many body state. In the many body state where the classical thermodynamic quantities have been theoretically defined and identified with measured variables, the quantum mechanical correlations are lost.

So how can properties like entropy and temperature come out of ignorance of information?

Temperature, pressure etc thermodynamic quantities are defined by measurements and experiments. The thermodynamic model/theory was developed to describe the experimental measurements and predict new situations. It works beautifully in the framework it was defined, except for situations where the quantized nature of the underlying framework created anomalies, as in the black body radiation. This last disagreement with the elegant theory of thermodynamics was one of the reasons that the quantized nature of radiation was postulated and added to the necessity of the theory of quantum mechanics.

When studying physics at different dimensions and energies, one has to keep in mind that all the theories are really models fitted on observations and data. The theories are appropriate for the framework they were developed and a hierarchy exists going from the quantized microcosm of elementary particles, atoms and molecules to the many body problem of macroscopic dimensions. Classical thermodynamics is an emergent theory from the many body state of the particulate nature of matter.

A mixed state just describes our ignorance about a particular system

Not the answer you're looking for? Browse other questions tagged quantum-mechanics quantum-information entropy density-operator or ask your own question.

0
Can an actual physical system have zero entropy?
10
Is amount of entropy subjective?
3
Entropy: subjective lack of knowledge that leads to objective conclusions

44
Differences between pure/mixed/entangled/separable/superposed states
1
What are pure states and density operators?
1
Is the coherence of a quantum state a relative concept?
6
What information does the Von Neumann entropy give for mixed states?
2
What is the state of a single electron in an entanglement?
1
Physical meaning of mixed state
0
Is it possible to express a density matrix of a system in a base of stationary eigenstates?