This question has stumped me for over a month now:

Why is it that a tractor has large wheels at the back and small wheels in the front?

Let's assume that there's a load behind the tractor and a cable is connected to the tractor and cart that carries the load. FBDs and moment equations for the wheel and load are highly appreciated.

Sum of Moment at the wheel's center=Applied moment- F_f*radius of wheel.

Often, a limiting factor in tasks required from a tractor is the amount of pulling force a tractor can apply without tipping over (the front rising up) - the engine is strong enough to do so.

Having the driving axle be high from the ground helps by simple lever action - see the illustration; twice the height means twice the maximum pulling force allowed before the tractor tips over. The other thing for the same problem that's commonly done is to attach a large heavy object far to the front - https://www.google.lv/search?q=tractor+front+weight&tbm=isch 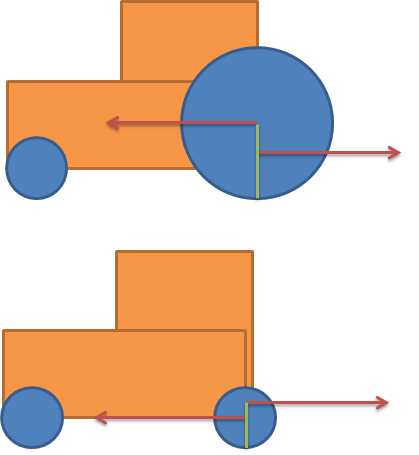 [edit] - a more accurate but more complex illustration of the actual leverages. 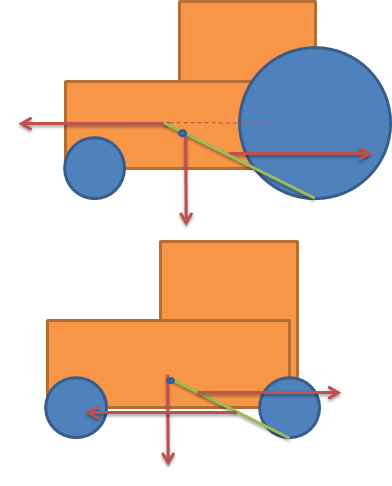 I grew up on a farm. As the oldest child, I was given chores. Lots and lots of chores. All those chores (and neighbors with nicknames such as "Jimmy three fingers"; farming is hazardous) were part of what made me get a degree in physics.

I drove one of these: 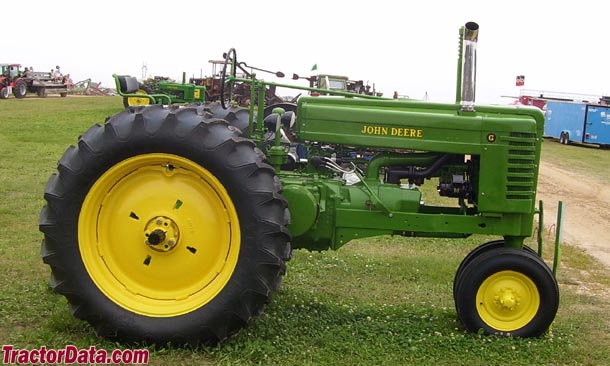 Now that's a tractor! An old style tractor, that is, and it occasionally got stuck in the mud. Here's a more modern tractor:

One of the reasons is that if the wheel axle is above the attachment point it drives the wheels downwards when pulling increasing traction.

Think of the opposite, where the attachment point is really high it will force the front wheels off the ground limiting the pull force so the tractor does not flip.

So what happens with the tall wheels and the attachment point below the axle is that the stability of the tractor does not limit the pulling force.

Tires with larger diameter and width have a larger area of contact to the ground. The weight of the tractor is spread over that area. (I assume that, in tractors with small front wheels, the center of gravity is near the large rear wheels, so that the small wheels do not support much more weight per contact area.)

Tractors are often used on ground that will be used to grow plants on, where it is an advantage to have space to contain or conduct water or air in the ground.
Also, tractors often drive over plants directly, and the damage to plants depends on the weight per area.

People it is all about traction. It seems like too simple of an answer but that is all it is. More contact with the ground provides more friction and less slippage.

It is not about torque. Torque is the rotational force about the axle. There is more torque required to spin a larger wheel than a smaller wheel so it would be better to have a smaller wheel, but because of necessity of traction larger wheels are used. In order to overcome the additional torque to spin bigger (and higher mass wheels) appropriate gear ratios are used.

Many automobiles have hp ratings in excess of very large tractors but cannot achieve the same work because they are built for speed (different gear ratios and traction requirements).

All of the answers give great reasons for large rear wheels. Another reason for small front wheels in maneuverability: large front wheels can't be swiveled through as large an angle as small ones.

Tractors are normally used for rough terrains and plughing fields. The terrains may be filled with mud or provide an imbalanced drive!

The Big wheels are located underneath the seat of the tractor and cover a maximum area. They wheels help the tractor in spreading the load uniformly over a larger area . The deep treads on the tyres give it an excellent grip.

Thus, the tires stop the tractor from sinking in to soil and mud..Thats why, mud can never sink a tractor but, can quickly bog down a conventional car!!

Now, why the front wheels are small!!

The tractors, which we see normally , are two-wheeled drives. Since the rear wheels take care of load distribution and pulling, the front wheels are spared off that duty (unlike in a conventional automobile!!). Thus, their only purpose is for steering the vehicle!!

Tractors are designed to run on soil of farm which is obviously not a smooth way. Besides, tractor is used to tilling the soil that requires much power and extreme friction to its tires. This is the reason very big size wheels also known as giant wheels are mounted on tractor. These giant wheels also let it work efficiently in wet fields without sink. One more reason of wheel’s big size is that it can cover maximum area of tractor which allow to dissipate entire load uniformly all over.

It is simple physics that maximum load of a tractor is applied at back side via pulling and digging, thus rear tires are big in size. Purpose of front tire is for steering the vehicle, hence being light weight and small is beneficial for ease of control.

Tractors commonly have larger rear wheels for several reasons. One of these reasons is weight distribution. The larger the rear wheels, the further the wheel will have to sink into the ground to become stuck, which, on the common automobile, is a little over halfway between the center of the rim (wheel), and the contact point to the ground. This is the point where tires have to climb their way out increasingly more vertically, instead of pulling themselves out more horizontally.

Another reason why this is common is for ground clearance. This one's pretty simple. The further off of the ground the non functional bottom of the vehicle is, the larger objects it will be able to pass over without contact and damage.

And yet another reason for this, is incredible toque put out by a tractors transmission. You may have noticed, your little four door sedan can be more powerful than a tractor, or you may be surprised about this. It is common to think that the higher horsepower you have, the more your vehicle will be able to pull. This is not always the case. For example, my school owns a small 12.5 horsepower tractor that I have personally witnessed pull out an orange tree, roots and all. You may be wondering how so little power, can mean such high results. Well, mostly due to the low gear ratios of the tractors transmission, this is possible. As some of you may know, the larger the diameter of a circle, or the higher the circumference, the larger amount of torque the object will have due. This is due to a simple law of physics (this is also why car differentials were invented). I'll put this into terms that are easy to understand. When you spin a circle, or any shape for that matter (let's say a ruler on the end of a pencil "helicopter" style), the outside edges of that object have to spin fast than the inside of the object to keep up with the inside. The outside edge has a farther distance than the inside to cover in the same amount of time, making it spin faster and with more power. Transmissions use the same excact principle. The larger the gear is, the higher the torque. This means, in first gear in your car, you are using the largest gear in the transmission. in the highest gear in your car, you are using the smallest gear in the transmission. Wheels work the same way.

Another reason for the rear wheels being much larger than the front wheels (on the common depiction of a tractor. Not all of them) is the fact that they help with weight distribution. Commonly, the engine in a tractor will be located in the front, and anyone who's tried to pick up an engine will know, they could definitely shed a few pounds. this would cause the front of the tractor to be heavier than the back, and on many tractors, there are front attachment points. Now what happens when a baby is sitting on one end of a seesaw and a full grown obese american plops on the other side? You guessed it, bye bye baby astronaut. In other terms, the front of the tractor may tip over.

I don't see this mentioned, but it might be as I didn't read every sentence posted here: Rear tires on tractors are generally filled with liquid, and they are very heavy. This adds to the traction, but also to the weight on the rear wheels. Thus they need to be wider, and being larger, as mentioned above, they present a greater length in contact with the ground as well. Tires designed for multiple uses and turf tend to be wider than ag tires because they need to "float" over grass with less digging in. Also rear tires can carry heavy implement loads, often as great or greater than the weight of the tractor itself. So, add it all up and you need a larger tire for weight, traction and load capacity as well.
My little tractor can lift 750 pounds with the loader but about 1400 pounds of implement on the 3 pint hitch. Put that implement 24 inches behind the tractor and the leverage created is substantial. So, say, that 1400 pounds becomes 2200 pounds on the tires due to leverage. Add 500 pounds per tire for liquid ballast, and the weight of the back of the tractor itself, and you see there is tremendous pressure on the bottom of that tire. Larger tractors have proportionately more ballast, heavier implements and more weight in the tractor itself.

Not the answer you're looking for? Browse other questions tagged newtonian-mechanics everyday-life or ask your own question.

2
Torque Required For a Motor to Move an Object on Wheels?
3
Rigid bodies - the wheel
1
What position of the center of gravity can make the front wheels of the car lift off the ground?
3
What causes a car's velocity to follow the front wheels' direction?
2
A car with constant speed doing a turn
0
Why does a car need more torque when accelerating from rest?
2
Rolling resistance and friction force in FBDs
2
Conceptual question about wheels
0
Rolling without slipping forward force
2
Why are wheels made to carry more mass on the circumference?