This is a question which I seem to have tackled multiple times, solved each time after reading a dodgy internet explanation, then partially forgotten about and retackled half a year later. It is time to put an end to this.

So first, at the power plant, a set power is produced. Let's call this $P_g$. Then there is a transformer that can say hypothetically transform this power into any voltage, and therefore following the equation $V = IR$, any current desired. Cool so far. 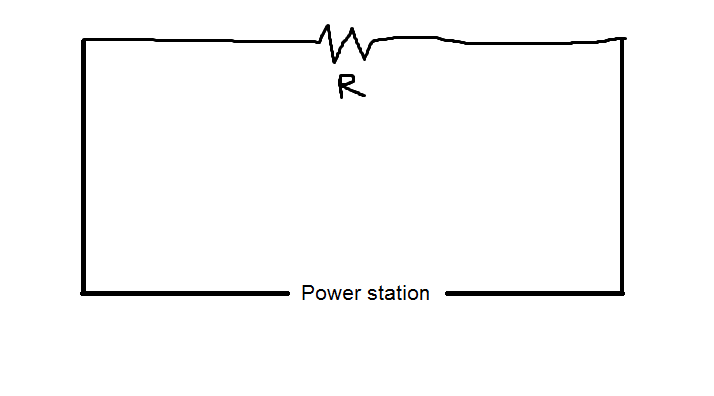 But wait: here's my problem. Can't the Equation for power loss be translated as thus:

BAM. Now the power seems to depend upon the voltage alone, as the resistance does not change, so it seems pretty logical that REDUCING the voltage reduces the power lost. Nuts. Evidently I have done something wrong. Lets take a simple case, $P_g = 10$. Lets say I set the voltage to 10, and the current to 1, and the resistance to 1 as well. That seems ok, as $P = VI$. Now lets use the two equations we have to determine the loss of power.

Any help is helpful, I'm probably just being silly at one step or another.

Well I was right, I WAS being silly i think. I pretty much completely ignored the fact that $V = IR$, so in the case where $P_g$ is 10, and the resistance was 1. I seem to have run into a complication now. If I set the voltage to 10, according to $P = VI$ the current should be one, but according to $V = IR$ the current should be 10. I run into a conundrum? I am now thoroughly confused. Any help is helpful.

You've begun with this:

Your diagram with a single resistance and a power station implies that the current in the line depends on that resistance and the line voltage. In reality, it does not. The resistance is just a (usually small) portion of the circuit.

sigh I'll leave the above, but I had misread your question. I thought the diagram was oversimplified, but that's actually the situation you were asking about.

Because there is only one source of loss (the resistor), then power lost through is is equal to power generated. $P_l = P_g$. You cannot now state that $P_g$ is a constant, the resistance is a constant, and voltage is variable.

This is great, as lowering the current means raising the voltage,

It does for constant power. But you want to have constant resistance instead. You cannot have both while varying voltage.

The voltage that a power plant pushes out, is consumed by wires (loss) and a machine (desired). The smaller voltage the wires consume, the smaller the loss.

As $P = VI$, to get low current, you have to get high voltage to get the total power of the system to remain. In this latter equation V is the voltage pushed by the powerplant.

2
Why does Joule's Law of Heating defined by $H=i^2R$ only?
15
Why do we reduce only current to prevent power loss? Why not voltage?
2
Heat loss using alternating current
2
Why are high voltage lines “high voltage?”
2
Power dissipation in High Voltage Cables
1
How do you calculate energy losses in an energy grid?
0
Why do we need to have a low voltage drop over long distances in transmission of electricity?

1
Power dissipated on internal resistance of short-circuited voltage source
5
How power lines use high voltages with a low current?
4
How should I think about voltage and power?
0
Why does the sum of the voltage drops have to equal the voltage of the emf source?
0
In a transformer why do we consider the lost voltage to resistance negligible?
14
Understanding voltage and power in the fluid analogy for DC circuits
0
How step-up transformers help in transmission of electrical energy over long distances?
10
How do resistors generate different heat if we make the current fixed and changed the voltage and resistance? Notice the flow of charge is constant
0
Reconciling the drift velocity with Joule heating at high and low voltage