In a spherical solid conductor the charge is always on the outer surface. Even if the sphere has a cavity, the surface of the inner cavity can not carry a charge due to Gauss's Law.

Gauss's law can only easily be used in cases with high degrees of symmetry and where you can define surfaces where the E-field is either parallel or perpendicular to the surface vector(s) and is constant or is zero over that surface.

In the case of a doughnut, there is clearly a high degree of symmetry, either along the axis of the doughnut itself or along a line perpendicular to the plane of the doughnut and passing through its centre.

However, the second condition is much harder to satisfy. If you consider a cylinder that encloses the doughnut and joins in on itself, the problem is that although the E-field immediately at the surface of the conductor is parallel to the surface vector, it is not of constant magnitude over the surface. Similarly, if you use a spherical surface, with centre at the centre of the doughnut and which cuts through the doughnut. You know the E-field cutting the surface of the sphere inside the conductor is zero, but it is not zero outside and not parallel to the sphere's surface vector.

In fact I do not think you are going to get very far with Gauss's law (I am of course immediately prepared to withdraw my answer should someone else come up with one; at least a straightforward one) unless you know what the variation of E-field strength is over the surface of the donut (see below). Instead you could construct your donut by superposing the fields from rings at different radii and at different heights above the central donut plane. Each one of these rings has an E-field that has an intrinsic asymmetry with respect to the geometric symmetries of the donut. So the superposed result (which will have a charge distribution that gives zero E-field inside the conductor) will also inherit these asymmetries.

You can see the field of a ring of charge below (taken from Wolfram.com). 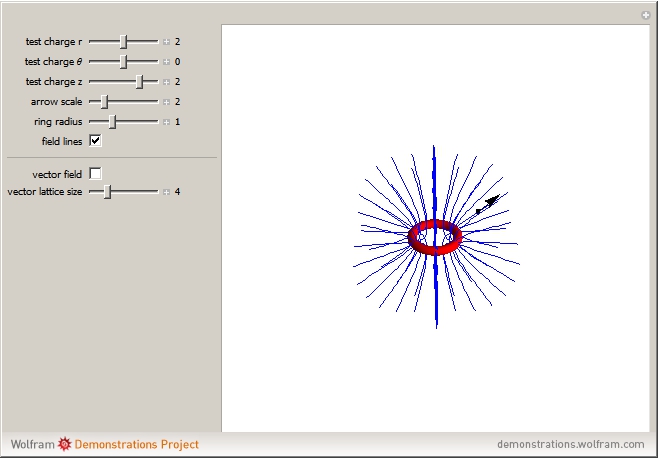 Not the answer you're looking for? Browse other questions tagged homework-and-exercises electrostatics charge or ask your own question.