Why does water rise through a hole in ice

I've just been watching a doco where some guys cut a hole in a frozen lake, the ice is 3 feet thick, I was surprised that the water rose to the level of the ice. My friend assures me it's because water equalises/levels with ice in the same way it equalises with itself... Is this right or is there another reason for the water rising to the same level as the surface of the ice.

Suppoose you put an ice cube into water, then it's going to float with about 92% of it underwater. This is shown in diagram (a) below:

But now suppose I make my ice cube a different shape. I'm going to shape it like a disk with a hole cut out of the centre, or you could describe it as a flattened doughnut. When I put my oddly shaped ice cube into the water it's also going to float with about 92% of it underwater. This is shown in diagram (b) below:

An objection to my argument is that in (b) the ice isn't frozen to the sides of the bowl, while in a lake the ice sheet is frozen to the lake shore. However ice is quite flexible and over a large distance like the lake it will bend and act as if it's floatingly freely and not connected to the shore. If you took some small container like an oil drum or bath tub, with the surface frozen to the sides, and cut a hole in the ice the water wouldn't come up so far.

I don't think John's explanation is sufficient. If 3 feet (90 cm) of ice is floating, it should leave about 7 cm of gap (according to the 92% number) - that is not what was described in the question, which was "the same level as the surface of the ice". But I think there is another explanation.

Water level in bodies of natural water is subject to change, but once the ice on a lake sets solid (I consider 3 feet "solid") it's not going to move. Now imagine that the river feeding the lake supplies more water. Where does it go? There is no spare space below the ice - so it would have to go over the top. In doing so, the pressure of the connecting body will equalize with the top of the ice - which is exactly what the friend said. 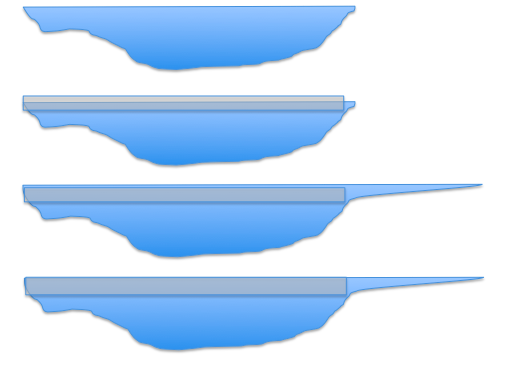 At the top, the water is liquid. In the second picture, the ice forms - it floats as usual, and is about 8% above the surface of the lake. In the third picture, the external water level rises ever so slightly. The top of the ice (which is stuck to the sides) is flooded, and the water will freeze. In the final image, the water pressure below the ice is now greater than atmospheric. And if you cut a hole, the water will rise to the level of the top. Because if there is any fissure in the ice, a greater pressure than this would have been relieved until it was exactly atmospheric.

A few mechanisms that can cause the rise in pressure include decay of organic matter or photosynthesis (either of which will generate air pockets that cannot escape - these will increase the pressure on the water), underground wells, or, as I mentioned before, supply of natural water (runoff, rivers) from communicating waterways.

Regarding the question of "the ice moves because people stand on it": even a tiny displacement of the ice (say, because of the weight of people on it) with a sealed ice sheet (no holes) would cause the water to rise up in the hole - it has nowhere else to go. But it could be argued that such a small rise in water level would lead to substantial buoyancy effects on the ice (because of the large area affected by the small pressure change). Two people and their snow mobile ~ 400 kg. 7 cm of water = $7 g / cm^2$. If the area of the ice sheet that bends under the weight has a radius of 10 m (remember this is almost 1 m thick... so very stiff), the water level would rise (working in cgs, $\rho = 1 g/cm^3$): $400,000 g/(\pi\cdot (1000 cm)^2 \cdot 1 g/cm^3) = 0.1 cm$ - a negligible amount on 7 cm in effect preventing this displacement. Thus I'm pretty sure it is only mechanisms that change the amount of liquid / gas under the ice that can give rise to this change is static pressure - while the ice itself can be considered unmoving.

Key is that as long as there are factors that increase the pressure, it will always equalize to the surface of the ice as the ice sheet is unlikely to be a perfect seal, and spillover will just move (grow) the ice surface by a tiny amount.

The valid question was raised in the comments whether the forces on the ice would not be so great that it would break away from the shore - or bend. Let's take each of these two in turn.

Assuming a circular lake of radius $R$, what is the force per unit length on the shore if a 3 foot thick sheet of ice has excess pressure underneath it sufficient to cause the water to rise to the lip? For density difference $\Delta \rho$, and thickness of ice $t$, the excess pressure (force per unit area) would be

For a lake of radius $R$, area $\pi R^2$ and circumference $2\pi R$, this implies a force per unit length of shore line of

Let's next look at the bending stresses, and see what kind of deflection a 3 foot sheet of ice would undergo:

The Young's modulus of ice is about 10 GPa (average of several values found online). We already know that the buoyancy of the ice (because of the lower density) means that the excess pressure would be that of a 7 cm head of water, or 7 gram / cm^2.

According to this useful table the deflection $y$ at the center of a simply supported circular plate of thickness $t$ and radius $R$, supporting a pressure $p$ with a Young's modulus $E$, is

Substituting the numbers for this problem, we find

In other words, the force of buoyancy would be sufficient to raise the ice by a full half meter - that's the power of that $R^4$ term. Obviously for a smaller lake the above would not hold, but it shows that for lakes greater than 50 m radius the central deflection is > 5 cm, which makes the argument "the ice is very stiff and doesn't bend" untrue.

That also means that the argument "the water rises to the level of the ice because of excess pressure under the ice" can only be true for small lakes with thick ice ($\frac{R^2}{t} < 1500 \text{ m}$ for < 1 cm deflection). Without knowing the dimensions of the ice that Rob observed, I don't know I can say more about this.

It's because a bunch of people are standing around on the ice looking at the hole. You are floating ice with people and cars, not just plain ice.

The question is unfortunately not very clearly stated; I cannot tell whether you (OP) were surprised about the fact that water is rising in the hole at all (as opposed to remaining at the level of the bottom of the ice), or about the fact that it rises all the way to the top of the ice (as the question states). By accepting an answer that explains that the water should not rise to the level of the ice but should remain 8% of the thickness of the ice below that level, which is about 7cm and should be easily visible, you are leaving a doubt as to whether you actually saw the water rise all the way to the level of the ice, or just stated so carelessly in the question, while having seen it rise only part of the way.

However, I would like to provide a complement to the answer by Jasmine that tries to give an explanation why the water could rise higher than 92% of the length of the hole. Whether this would explain it rising all to way to the level of the ice depends on a complicated calculation for which many necessary data are missing, so I cannot tell; however it does not look very likely.

But you said that "some guys" were cutting the hole, maybe carrying some heavy equipment, and there also must have been somebody filming, so one is not exactly in the situation of an isolated hole in the ice. As I said ice is quite flexible at a large scale, so the ice sheet may very well be pushed down slightly by all that additional weight near the hole. This will not cause the water level in the hole to change much in an absolute sense (the water actually displaced by the ice easily finds additional space freed by an ever so minuscule rising of the ice sheet of the lake), but with the hole itself going down, the top of the ice gets nearer to the level of the water.

It is easy to say how much the ice moves down in terms of water displaced: by Archimedes' law the weight of the displaced water matches the weight placed on the ice. To know the distance of displacement is much harder, since it depends on the shape of the displacement, which in turn depends on the rigidity of the ice. Just for a ballpark figure, 1000kg of additional weight (a generous estimate) might displace the ice downwards by 5cm over an area of 20$\,$m$^2$, which would be a disk of about 2.5m radius. Of course the actual displacement is more like a lens shape, displacing very little near the rim and most near the center, but one gets some estimate of the order of magnitude of the phenomenon. Whether a 90cm ice sheet would be flexible enough to allow such a large deformation depth at such a small scale (as opposed to a smaller depth over a larger area) is a question that I am not equipped to answer, by my guess would be that the answer is no.

Not the answer you're looking for? Browse other questions tagged water ice or ask your own question.

8
Does an ice cube change its core temperature as it melts?
8
Why does warm water sink?
2
Would High Explosive helped free Shackleton's ship, trapped in pack ice?
3
Frozen lake ice formation
70
Why does water falling slowly from a tap bend inwards?
3
Salt water and ice, vs. plain water and ice