Consider the standard model of kinetic contact friction taught in introductory physics courses: $$F_f=\mu_k*F_N$$ According to this model, for a block with initial speed $v$ moving on a horizontal surface the speed as a function of time is $$v(t)=v-at$$ where $a$ is calculated from the force equation above. If we do not impose any restrictions on $t$, then this model suggests the block will reverse direction after $t=v/a$, which is not what happens in reality. Alright, so suppose we impose that this relation holds for all $t \le v/a$. Is this a good approximation of kinetic friction between a block and a surface. I would expect that $a$ should depend on $v$, by some exponential relation.

My question is: how closely does this model aproximate what actually happens, and can you describe a more accurate model where $a$ is not constant.

For unlubricated friction, the simplistic model is quite good when the surfaces are flat and macroscopic deformation can be neglected. There are three things in particular I would like to elaborate on.

First - the question of the equation of motion that you wrote down. The force of friction, at a microscopic level, is actually a consequence of the breaking of bonds between the surfaces that "stick" together. In other words, you are doing work breaking the bonds, move a small distance, and do it again. If you think of it not as a force, but as work done per unit distance moved, then the conundrum you created goes away. No movement = no work done.

Second - the question of surface deformation. This is actually really important. When you look at the contact area of a ball with a surface, in principle (in the limit of infinite stiffness) the contact happens at a point. In reality, of course, there is some deformation and you end up with a contact area - this would be a circle in the case of a sphere. As the force increases, the "hole" that the sphere makes in the surface becomes deeper (assuming for a moment that the sphere is harder than the surface, for ease of visualization). Now you can see that as the hole becomes deeper, the walls of the hole get steeper - so not only do you have the increase in friction due to the increased normal force (microscopic effect that is valid for flat surfaces) but now you also have to "go uphill" as you try to slide. The net effect is that friction increases faster than linearly with force, once the stresses become large compared to the elastic modulus of the materials involved.

Third - the question of lubrication. Once you add a layer of material between the two objects that slide past each other, viscous forces will add a nonlinear term to the friction - on the one hand, the motion of the surfaces supports the film between the surfaces (which would be squeezed out in the static situation), on the other hand the shear on the film will produce a velocity-dependent term.

The science of friction is complex enough that it has its own name: "tribology". Right there should be a hint that it is indeed not as simple as it sounds... An example (from "Tribology 101" which is a bit more advanced than "high school friction") is the Stribeck curve ("Curva di Stribeck" by A7N8X - Own work. Licensed under Creative Commons Attribution-Share Alike 3.0 via Wikimedia Commons - http://commons.wikimedia.org/wiki/File:Curva_di_Stribeck.svg#mediaviewer/File:Curva_di_Stribeck.svg) - adapted by Floris by adding axis labels with tip of the hat to @ja72: 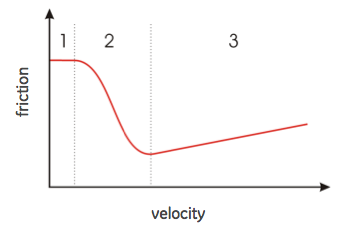 The exact shape of the curve depends on all kinds of factors - but it shows that your intuition is right, and that there is no simple answer.

There are two separate questions here:

I can't improve on Floris' answer to (2), but it's worth making a few comments on (1). The problem is that (1) is not an equation of motion. For example both $\vec{F}_f$ and $\vec{F}_N$ are vectors, and they point in different directions. So the equation in (1) cannot describe the physics unless we take $\mu_k$ to be a second rank tensor, which is isn't. So if you naively write:

and solve for $x(t)$ you should not expect to get an equation describing the motion of the particle. Actually it does describe the motion but only over a limited time domain.

It is important to remember that $Fr$ always acts in the opposite direction to $v$. Therefore, if the block was to start moving back the other way the friction would still oppose it and slow it down again.

Obviously this does not happen, a simple way to explain this is that when $v=0$ it has no direction and therefore neither does $Fr$.

This model is pretty good for dry, sliding friction between two surfaces under reasonably normal conditions. If you want to consider lubrication, or rolling the situation becomes far more complicated and you can have forces that are proportional to $v$. @Floris' answer gives some of the situations that can occur. The friction also becomes more complicated when you move to smaller contact areas and higher contact pressures (think dragging a pin across the surface) where the local geometry and surface deformation becomes far more important.

3
Why do we assume Kinetic friction to be constant?
0
Mass and friction

2
Force applied perpendicular to direction of motion, static or kinetic friction?
7
Does the contact area affect friction forces?
0
Does rolling friction depend on area of contact?
0
Conservation of momentum and Newton's second law
1
Is friction enabling relative motion between bodies in contact?
0
Direction of frictional force in general and in circular motion
1
Does it take more force to keep a mass on an inclined plane at rest than it does to move it upwards at a constant speed?